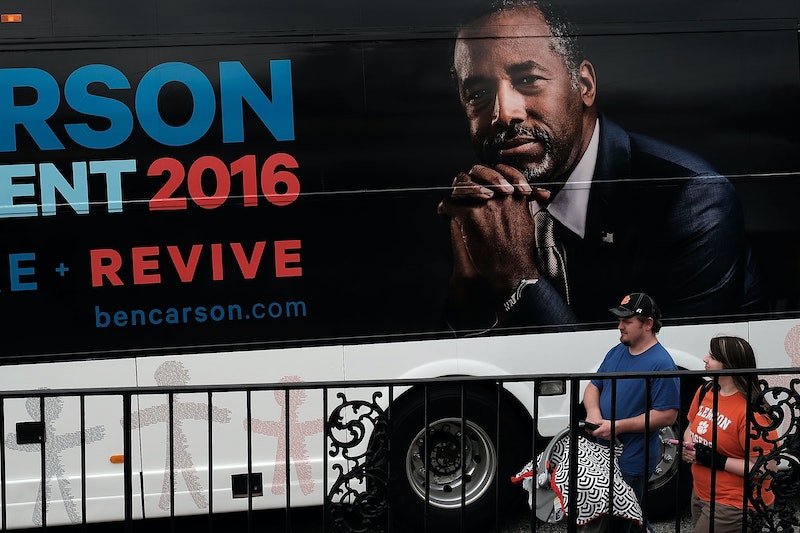 Surely, this has to be it, right? Everyone's wondering if Ben Carson will finally drop out of the Republican presidential race if he loses Super Tuesday — which, let's be real, isn't so much an "if" as a "when". But while Carson has yet to win a state primary — let alone even place anywhere but last or close-to-last place — his close friend and adviser Armstrong Williams told The Hill that Carson will not be dropping out if he loses Super Tuesday.

“Until then it’s open season, and the race is wide open,” Williams told The Hill. “Dr. Ben Carson is not and never will be a part of the political class. He doesn’t think like a politician, doesn’t act like a politician and doesn’t rely on those relationships like the other politicians do. He’s staying in the race even if he doesn’t get any delegates tonight.”

OK, so we know he's not like any other politician in the race — that much has been made clear — but just exactly why he would stay in the race despite the fact that he's getting killed remains unclear. (Though one can surmise that the prolonged media exposure would only raise the stakes for his potential future speaking fees and book deal contracts.)

Asked on Morning Joe Tuesday morning whether he would re-evaluate his campaign if he lost Super Tuesday, Carson himself said, “I re-evaluate the campaign every single day. But one of the major factors for me is our supporters. That’s the reason I’m in here … I’m in here because people asked me to be here. I will continue to listen to what they have to say.”

That sounds noble and all, but so far, what the voters have said is pretty much "thanks, but no thanks." Carson finished last in the New Hampshire and South Carolina primaries and is not projected to win any of the races on Super Tuesday. Eleven of the states Tuesday night will likely give their delegates to only the top-two finishers, which means Carson may finish with little-to-no delegates at all. But this is not a matter of logic. Or popular opinion, apparently.

“Throw out all the pundit analyses. None of them have any idea what the outcome will be,” Williams told The Hill. “While you’re at it, throw out all the rule books, because Dr. Carson will be writing his own chapter. They don’t call him ‘long shot’ for nothing.”

“He wants to send a message to this nation, and when he’s unable to do that he’ll drop out. I’m sure of that, but it’s not there yet for him. He’s following what the Lord has called him to do," Williams said. "If he thinks it will negatively impact the party or the Lord taps him and says you’ve done a good job and it’s time to back off, he’ll do it.”