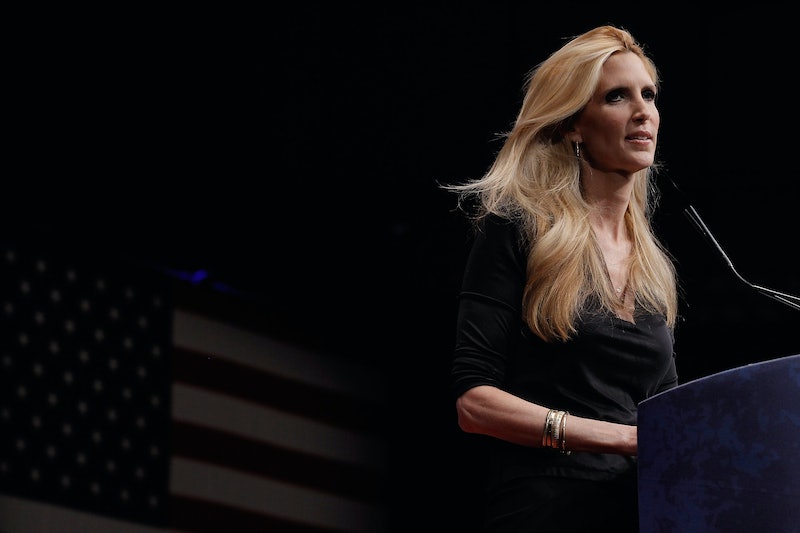 Despite the fact that Ann Coulter slates herself as a political commentator, it seems like her truly thoughtful comments on politics are few and far between. But during Super Tuesday, it looks as though Coulter may have finally gotten one thing right. Though she normally reserves her most scathing commentary for Democratic candidates Bernie Sanders and Hillary Clinton, Coulter made a fairly astute observation about how the two are faring during the March 1st primary night. Her tweet definitely adds a certain weight to the evening, which is so far going in favor of candidate Clinton.

Coulter pointed out that Clinton's wins thus far in Virginia, Georgia, Alabama, Arkansas, and Texas are perhaps not the great achievement people are thinking they are. This is because these states nearly always vote Republican in the general election. Only Virginia swung in favor of then-candidate Barack Obama in the 2012 election. Sanders' wins in Vermont and Oklahoma show that he is a strong contender for Democratic and swing states. In this way, Coulter's tweet illustrates that it would be Sanders, not Clinton, who stands a better chance of nabbing victory in Democratic and swings states, and therefore actually winning the general election.

This distinction is an important one to make, too. The fact that Sanders is winning in Democratic and swing states further backs up the theory that he would beat candidate Donald Trump in the general election. And the Democratic candidate's ability to beat the businessman has become increasingly more important as the primary election process has gone on, and practically doubles in importance coming out of Super Tuesday.

As of Tuesday evening at 10 p.m., Trump had won Alabama, Georgia, Massachusetts, Tennessee, and Virginia, equaling his victories to five of the 11 states up for grabs thus far. By all accounts, it looks like Trump will take a good portion of the remaining states. His closest competitor, Texas senator Ted Cruz, has only won two states well into the evening. Therefore, it's becoming more and more apparent that whoever wins the Democratic nomination will have to defeat Trump in the general election.

According to a poll by Quinnipiac University, Sanders stands a better chance of defeating Trump in the general election as compared to Clinton. The poll estimates that Sanders would beat Trump by a 13 point margin, 6 points higher than the former Secretary of State. If Trump's surprising momentum is any indicator, the Democratic party would need the best possible shot of defeating him.

So if Coulter's assessment is accurate, Clinton's victories could mean an ultimate defeat for the Democratic party come time for the general election. And if this is the one thing she's right about, that's definitely a little terrifying.