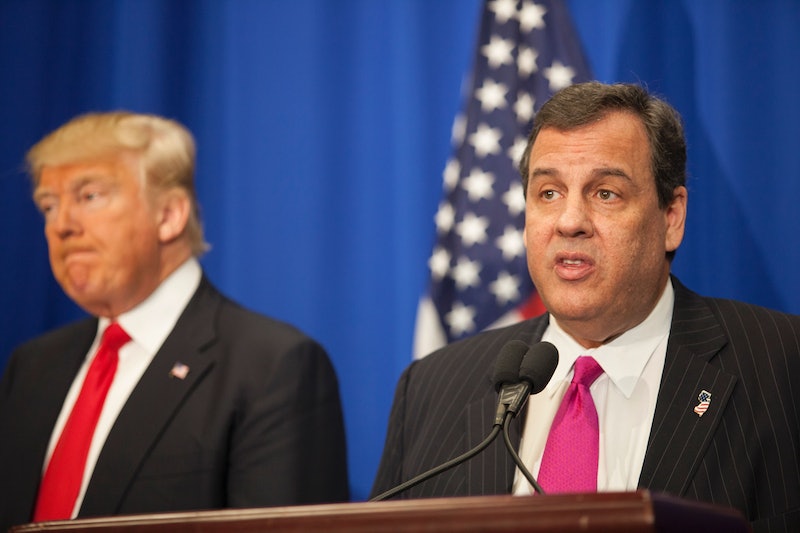 On Tuesday night, Republicans around the country came out to vote on Super Tuesday. And with the exception of Ted Cruz's wins in Texas and Arkansas, the night basically played out exactly the way everyone anticipated, with big wins for the months-long frontrunner, Donald Trump. There was no victory speech to be seen, however, as Trump opted instead for a lengthy press conference, all with his biggest early endorser, New Jersey governor Chris Christie, at his side. And it looked pretty damn awkward ― Chris Christie's haunted face at Donald Trump's Super Tuesday presser told the entire sad story.

Christie endorsed Trump in late February, in the aftermath of the 10th Republican primary debate that many political observers viewed as a win for Florida senator Marco Rubio. The move earned Christie widespread condemnation from the Republican establishment, and a fair amount of revulsion within his home state ― on Tuesday, a whopping six New Jersey newspapers joined forces to call on the beleaguered governor to resign.

Christie didn't go along with this idea, although he has clearly stepped into a new, foreign, awkward role: Trump's hapless campaign surrogate. On Tuesday night, he introduced Trump, and then had to stand behind him during the Republican juggernaut's press conference. Here's a Vine of his face, from BuzzFeed's Chris McDaniels, that pretty much tells the whole pathetic story.

What's in that face? Obviously, only Christie himself know for sure what thoughts and feelings were racing through him at that moment, but you can definitely indulge in some, shall we say, amusing speculations. Maybe that's what Chris Christie looks like when he thinks, "Damn, I'll never win another election!" Or, maybe he's thinking, "Why the hell did I do this, can I take it all back?" Or maybe it's more of a "forget what everybody thinks, just choke down the bile until Donald makes me vice president" face.

Only one thing's for sure: whatever Christie does from here on out in the world of politics, he's going to be doing it after effectively betraying every moderate or party loyalist Republican who ever supported him. So maybe that's part of what's kicking around behind that dazed, dead-eyed face of his, the grim reality really setting in: "From here on out, it's just me and Donald. I can't go back." He sure as hell can't go back to his home state, at the very least ― his approval ratings have cratered to just 29 percent.