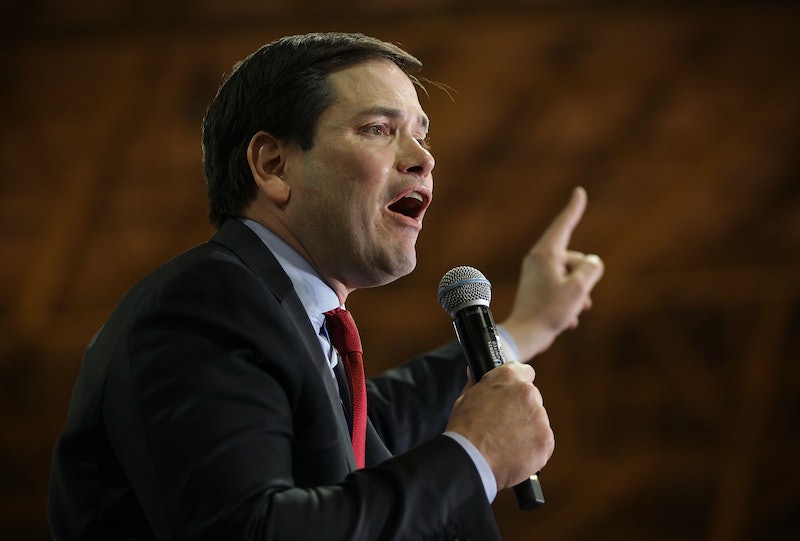 The Internet exploded Tuesday night when Chris Christie realized all his life mistakes while standing behind Donald Trump at his victory rally in Palm Beach, Florida. Just a few hours later, Marco Rubio was devastated by the sorry state of the nation when confronting the reality of Trump's near Super Tuesday sweep. It looked like he took a moment to cry internally during an interview with CNN, but whatever was actually going on in Rubio's head, the result was another hilarious picture from Super Tuesday.

To be fair, Rubio has the right to look a little disappointed. Besides being beat out by Trump in general, he came tantalizingly close to winning in Virginia, ceding the state to Trump by only three points. Rubio did manage to pick up nearly 30 delegates, so the night wasn't a total loss, but it's not looking good for the candidate from Florida. Ted Cruz significantly widened the gap between second and third place, and Rubio's support from the Republican establishment has been less helpful than anyone could have imagined during this highly unusual election cycle. Fortunately for Rubio, the Minnesota caucus has not yet been called and he is actually leading there, but picking up most of Minnesota's 38 delegates still wouldn't do him much good.

Rubio's best bet is probably to start looking ahead to upcoming races, like the primary in his home state of Florida on March 15. As of the last polls, Trump was leading with Rubio in second, and Trump seems to be already trying to preempt Rubio's home field advantage by having his campaign rally at his hotel in Palm Beach Tuesday night. It looks like Trump is already thinking long-game, and Rubio should too if he wants any chance at the nomination — getting a really solid foothold in Florida, a notoriously tricky swing state, would make him look like a more viable candidate in the general election. It shouldn't be too hard if Rubio really exploits the native son angle, but the power of Trump can't be underestimated, especially in light of his super Super Tuesday.

All in all, Rubio had a rough night, and a rough couple of months, so it's totally understandable that he looks bummed out — it's just unfortunate that it had to happen during a live interview. It'll still be a long road ahead for the Republican establishment candidate, so this probably won't be the last the world sees of his sad little face.