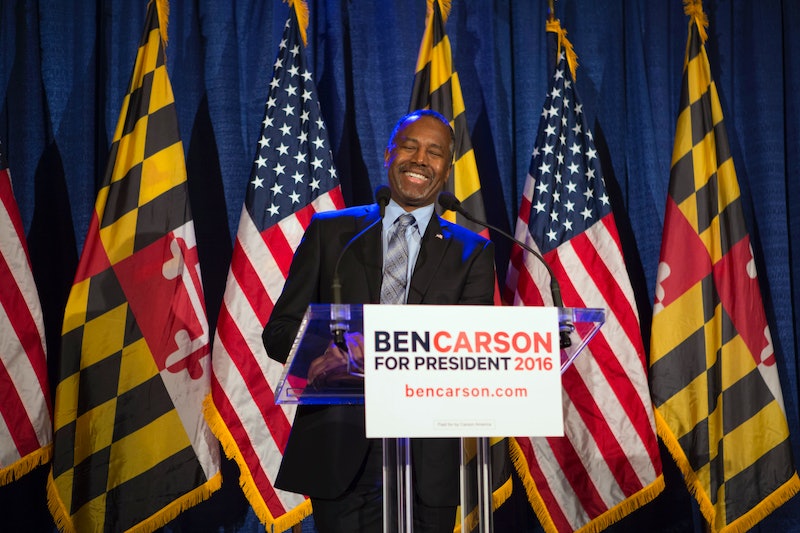 Admit it. You clicked on this article to see if our latest predictions of who will drop out after Super Tuesday revealed that Carson would be next to call it quits. Despite a frankly abysmal showing at the nationwide event spanning multiple caucuses and primaries, Carson is not only firmly committed to running but also appears to be even more invested in his chosen political party. There were no one-liners or live shots of Carson's "fruit salad" of his life to be had. Such an absence could point to a candidate deeply reconsidering his campaign.

Not if Ben Carson has anything to do with it. Carson instead released a statement requesting that all GOP candidates meet with each other prior to their March 3 debate in Flint, Michigan. The retired neurosurgeon issued this proclamation on Super Tuesday and was reportedly getting in touch with his fellow candidates to set up such a meeting. Carson said:

The American People deserve so much more from the candidates who are seeking the most powerful position in the free world, and I share their concern that this race has taken a turn for the worse, to the point of embarrassment on the world stage. A house divided cannot stand, and it is imperative the Republican party exhibit unity by the candidates coming together with a pledge to talk about the many serious problems facing our country, instead of personally attacking each other.

Even Carson's campaign staff has made it clear he's not leaving, arguing that anything can happen at this juncture with the first-time political hopeful's campaign. Sadly, very little has occurred over the course of Super Tuesday for Carson. Instead, the day proved to be a decisive win for GOP frontrunner Donald Trump. Democratic frontrunner Hillary Clinton nabbed some key victories as well. Even Marco Rubio and Ted Cruz could claim at least a state to their campaign. That just leaves Carson and Ohio Gov. John Kasich as the only candidates to truly lose Super Tuesday. Kasich similarly appears to be continuing his quest for the presidency.

The politician continued to point to recent polls suggesting he would best Hillary Clinton were he to get the nomination. Even Kasich's campaign team has appeared more fired up than ever. According to Politico, Chief Strategist John Weaver claimed that the Ohio primary will "reset" everything, as Kasich will be playing on his home turf. Weaver then went on to attack Rubio and Cruz, suggesting a shift in rhetoric from Kasich's typically reserved, reasonable persona. Both Kasich and Carson appear poised to continue their campaigns, as do the many candidates polling higher than them. Super Tuesday may have decided a lot but it doesn't appear to be narrowing the political field.