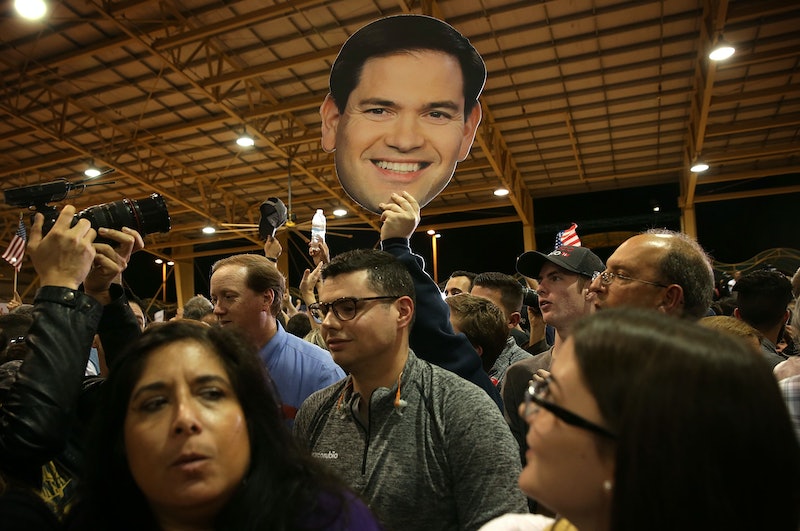 Marco Rubio scored his first win in the course of the presidential nomination contest in Minnesota on Super Tuesday. Rubio swept the southern half of the state, as well as winning in the Twin Cities. Ted Cruz won the northwestern portion, which is somewhat less densely populated. Coupled with his noticeable wins just outside the Beltway in northern Virginia, it might be prudent to ask: Is Marcomentum actually a thing? Maybe, but there's a catch.

The senator from Florida has been able to overcome a series of missteps and score some influential endorsements from other young Republican figures: South Carolina governor Nikki Haley and Louisiana governor Bobby Jindal have both made appearances alongside Rubio on the campaign trail. Haley even stepped up to bat for Rubio at a campaign appearance in Atlanta. At the rally, Haley denounced former reality show host Donald Trump in no uncertain terms. "I have to tell you, Donald Trump is everything I taught my children not to do in kindergarten,” she said to the crowd before adding that she'd taught her sons how to stand up to bullies: "When a bully hits you, you hit that bully right back!”

This relatively mild tone must have appealed to Minnesotans, setting Rubio apart from the the eruptive, expletive-laden Trump.

The catch, though, becomes apparent when you drill down at the numbers and look at the actual number of votes cast in Minnesota. For example, in the 5th congressional district, where Rubio won by 24.6 percentage points, he didn't even grab over 5,000 votes: 4,818 to be exact. In the 4th congressional district where he won by 21.9 points, Rubio got a total of 5792 votes. Every vote does matter in a democracy. However, when your widest margins are produced in districts where you got just over 10,000 votes in total, calling it momentum is a bit of a stretch. Especially when looking at Bernie Sander's numbers from the same districts: he got 16,972 votes in the 4th and 39,221 in the 5th.

Marco Rubio may have won his first statewide contest, but to prove that his campaign has gained any kind of national momentum, he'll need to do more than win over the hearts (and votes) of the few Minnesota Republicans that happen to still exist in an overwhelmingly liberal state. He'll need to prove that he can win in at least one demographically diverse, yet delegate rich state like California, Illinois, or New York before his campaign will be able to mount a serious case for the nomination.