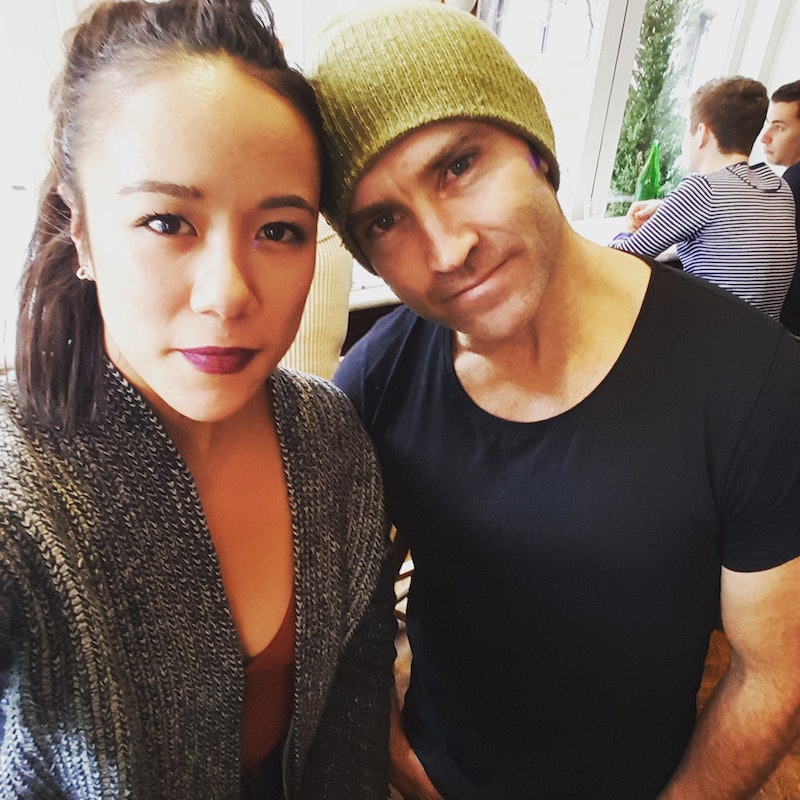 Since the U.S. Supreme Court legalized interracial marriage 48 years ago, the number of mixed-race couples has been steadily rising. In 1970, one percent of American marriages were interracial; in 2013, 12 percent were. You could say that we’re getting more progressive every year — but our world is far from prejudice-free. For instance, I've been in interracial relationships my whole dating life, and I’ve experienced firsthand the inappropriate comments that interracial couples deal with.

The lingering stares, uncomfortable questions, and crude remarks are just some of the damaging racial microaggressions that these couples endure. As a half Italian, half Korean woman, it's nearly impossible to find a partner who matches my ethnicity, as the status quo would dictate for a “normal” couple. Sometimes the reactions my partner and I get are just plain annoying; other times, people say some seriously hurtful things that make us feel like we don't belong together.

While most of these comments aren’t intended to be hurtful, they are. We’ve teamed up with FYI’s Bride & Prejudice to bring you a list of things you should never say to interracial couples. Next time you think about saying any one of these things to anyone, friend or stranger, think again.

This article is sponsored by Bride & Prejudice, premiering March 15 at 9/8c on FYI.

1. "You're Going To Make The Most Beautiful Mixed Babies!"

First of all, nobody said that we were planning on having kids, so please don't assume so. Even if we do want children one day, they would be beautiful because they're beautiful, not because they're multiracial. Sure, all those Pinterest boards and Tumblr accounts devoted to praising mixed-race babies may seem cute, but they're highly problematic. They perpetuate the notion that these kids' "unique" ethnic makeup is the primary thing that makes them lovable. Not okay.

2. "It Must Have Been Hard For Your Parents When You Told Them"

Just because some people out there still discriminate against mixed-race couples doesn't mean that our parents did or do. Presuming that they automatically fall into this category is insulting. And even if some parents have given one or both members of an interracial couple a hard time, you shouldn't pry. If they want to tell you about this experience, they will do so on their own time.

3. "Seriously, You Guys Are The Future"

Remarks like this will only perpetuate this twisted notion that we're consciously trying to be progressive. Seriously, we aren't trying to make a statement by walking down the street hand-in-hand. We're actually just two human beings who love each other. While some people genuinely think this is a compliment, it can make someone feel extremely uncomfortable. After all, it isn't free of certain "othering" ideologies.

4. "How You Met Must Be An Amazing Story"

Not all multiracial couples have a forbidden love story. It's not always a "meet cute" like you see in the movies. In fact, the story of how we met is probably just as boring as yours. The more people think that mixed-race couples have extravagant tales to tell about their relationships, the more we will teach the younger generation that they are somehow different from other couples. That's exactly the kind of thinking we need to get rid of.

Generally, you say you're proud of someone when they've accomplished something of significance. Two people of different races dating each other doesn't count as an achievement. Please don't make it sound as if we've overcome some incredible obstacles just to be ourselves. Every time someone has said this to my partner and I, we can't help but feel an immense amount of pressure. It puts us in an awkward position — as if we should be thanking them for recognizing us. That's something we didn't sign up for.

6. "You Don't Like Dating People Of Your Own Race?"

Yep, people have really asked that. For starters, it's invasive. Secondly, it insinuates that dating people of your own race is the "normal" thing to do. And it disregards the possibility that there might not be an abundance of individuals out there who are the same race as us.

For example, I've only met one other half-Korean, half-Italian person. We didn't exactly hit it off romantically, considering he was gay. The person asking may not feel that it's overtly racist, but this question certainly feels that way when you're the one being asked. The fact is that I'm in a minority, and this question only reminds me of that.

7. "What Do You Think Your Kids Will Identify As?"

Our society gets so caught up in labels when it comes to race and ethnicity. Imposing this question on interracial couples just keeps us confined in the rigidly-defined boxes of ethnic heritage. Sometimes when I fill out paperwork, there is literally no box under "Race" that suits me except for "Other." As long as we're stuck in the mindset that everyone should be classified in certain groups, we'll have trouble moving forward in how we think of ethnicity. Regardless of race, people are who they are.

8. "You Know, I Met An Interracial Couple Once"

When people say this, I know they're just scraping the bottom of the barrel to find ways to connect with my S.O. and me. The media isn't doing us any favors in this area. Building up couples like Kim and Kanye or Seal and Heidi as "hip interracial duos" maintains the illusion that mixed-race pairs are special. Instead of relating us immediately to another random couple of mixed race, just see us for the regular couple that we are.

No matter how funny or sweet you might think you sounds, don't ever say this. Telling someone you've always wanted to date a black guy because she happens to be dating a black man (and you think she'll totes get you) is just not cool. That's fetishizing a whole race of human beings, and it's offensive.

At the end of the day, nobody wants to be defined solely by whatever race they are. Plus, couples definitely don't want their love defined that way either. So try to keep your comments to yourself.