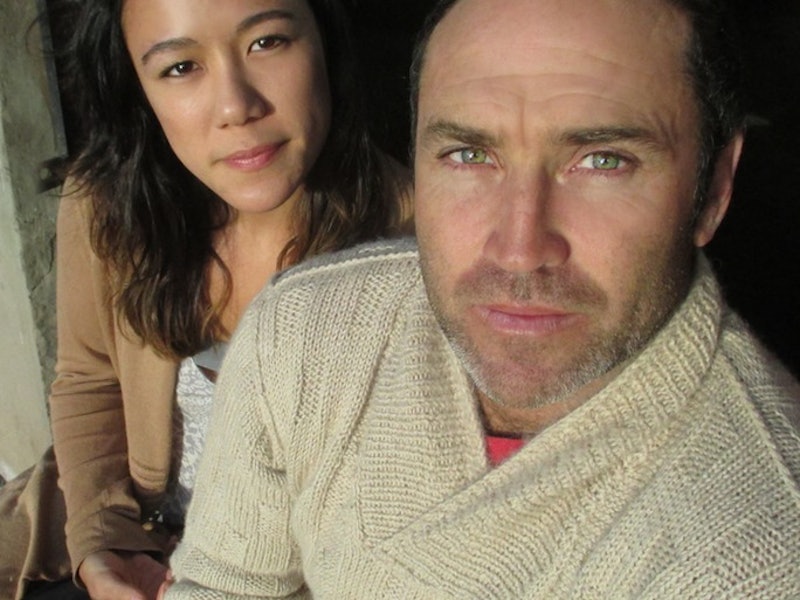 Although we dote on public pairs like Kim Kardashian and Kanye West, interracial couples don't make up the majority of lovebirds we see strolling through our neighborhood or starring in a Hollywood blockbuster. They're certainly on the rise, though — in 2013, 6.3 percent of the American population reported being in an interracial marriage, compared to the 1.6 percent in 1980. Overall, the multiracial segment is growing three times faster than the general population of the United States, so it's safe to say we'll see this number tremendously increase over the next few years.

Every relationship I’ve been in has been an interracial one — not because it’s my life mission; that’s just the way the cards have fallen. (Plus, I’ve yet to meet a male who is also Korean-Italian.) My partner and I have endured a whole spectrum of comments in response to the mere image of us sitting in a café with our arms intertwined. Unfortunately, we're not the only ones out there who still experience discrimination. Sometimes it's actually easier to handle the outright rude verbal missiles because we know it's coming from a place of ignorance; but there are times when a passive aggressive so-called compliment or an extended sideways glance can hurt so much more, especially when they come from people we call friends.

Just because multiculturalism exists that doesn't solve racism, in its many forms, by any means. We still have some work to do with our language so we can reach a place of true acceptance and respect. Here are eight things interracial couples shouldn't have to hear ever again.

Do you mean to ask if my mom and dad are OK with the fact that I’m with someone I’m totally head over heels for? Then the answer is yes. But by asking that question you’re assuming there is something going on that others should have a problem with. I know our parents’ generation doesn’t have the best track record when it comes to being accepting of race and gender issues, but that doesn’t mean they’re all resistant to seeing us together. I'm sure there are interracial couples out there who have faced discrimination from their family, but if they’ve experienced anything remotely closely to it, let them tell you on their own time.

I know for a fact that this isn’t true, because Brad Pitt and Angelina Jolie are still very much alive and well. You don’t have to exaggerate or flatter us in any way just because we look different than the other couples who live in your apartment building. We’re not an item to be fawned over, like a golden retriever puppy or an enviable pair of stilettos — and please don’t pinch our cheeks in the process. (You'd be surprised.)

If you genuinely think we are a good-looking pair, we don’t mind hearing it, but no need for the uncomfortable, over-the-top compliments. Those who say this might be trying to be nice, but authenticity goes a much longer way.

Thanks for that. We had no idea. Some people get so excited about the prospect of offspring that comes from two or more races, as if they’re adorable tokens that represent the modern melting pot of America. However, if we are considering popping out a kid or two, I can promise you our minds won’t be fixed on how ethnically ambiguous and mysterious they will look. I don't want my son or daughter to be singled out from their peers due to their unique facial features; I want them to shine on account of their own personalities and talents. Children of mixed races are beautiful, yes, but not automatically because of their “special” heritage.

4. “I’ve Always Had A Thing For [Insert Racial Category] People Too.”

This one is always uttered as a whisper, with a devious look in their eyes, and it can be a dangerous thing to say. If we keep perpetuating the idea that individuals of different ethnicities are items to be fetishized, people will forever be objectified and interracial couples will continue to be seen as anomalies. We all just want to be seen and loved for who we are, not for the factors in our lives that we have no control over.

I know that most of the time this phrase comes along as a joke or from a place of innocence, but it doesn’t offer anything useful to the conversation. Comments like this and terms like “yellow fever” need to be retired before they get passed down to the next generation.

Quite a few of my exes, as well as my current partner, have been at the receiving end of this one. It always breaks my heart, frankly, because it implies that it takes a certain kind of person — not the normal kind, mind you — to be attracted to a non-white chick like me. The fact that a guy of another race is with me isn't a sign that he's going through some kind of phase, and vice versa. Even if we are currently with people who are ethnically different than our exes, that doesn't mean we have changed or gone down some sort of strange, unbeaten path. So, refrain from displaying shock on your face when you see your friend and their ethnically-varying SO.

Substitute any famous mixed race couple here for the sake of making my point. As much as I loved Seal and Heidi together — and hate to see them divorced — please don't compare us to them just because they are interracial. Our love isn't meant to copy the celebrities or Modern Family. We are committed to each other because we are a good fit, regardless of our — and their — ethnic backgrounds. Try to keep the famous folk out of the discussion; our individuality is diminished when you immediately bring up a celebrity couple, as if that's the only way you can relate to us.

7. “Have You Ever Thought How Hard It Might Be For Your Kids?”

Of course we've thought about how hard life will be for our children — but not because of their ethnicity; the world is a hard enough place as it is. This isn't unlike asking a parent whether they're worried if their gay son or daughter will have a hard time fitting in (remember the awkward dinner scene from The Family Stone ?).

It's best to avoid offensive, backward-thinking comments like this because it constantly reminds us that we are categorized in a minority group that still endures unfair prejudice. We don't want our kids to grow up scared that they will be biased against, so steering clear of this kind of commentary will help reduce fear around the issue.

This one's my favorite — only because it's so ludicrous. First of all, interracial couples are not some ambassadors who symbolize forward-thinking notions. Furthermore, we are neither trying to be progressive nor modern. We're just dating, for crying out loud! We shouldn't label multiculturalism as an innovative, futuristic part of our society; diversity is happening right now, so let's feed it with love, rather than treating it as this liberal emblem.