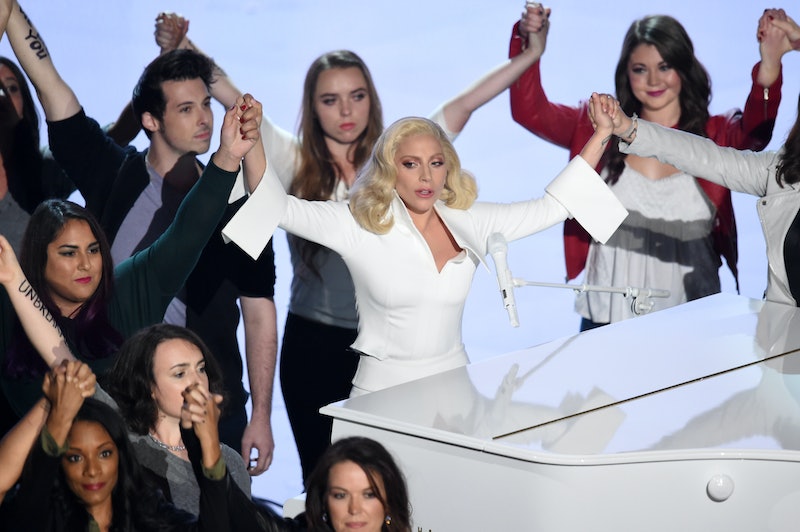 It's been several days since Lady Gaga's Oscars performance of "Til It Happens To You," and the world is still reeling from the powerful deliverance, which included a stage full of sexual assault survivors and an important introduction by Vice President Joe Biden about the prevalence of sexual abuse. The performance certainly had a profound effect on Gaga, a survivor of rape, who has been sharing vulnerable, honest truths about her own assault and how standing on that stage surrounded by other survivors has helped her overcome her feelings of guilt and shame. The singer, who told Howard Stern in 2014 that she was raped at age 19, revealed in a Instagram post on Tuesday night that her grandmother didn't know Lady Gaga was a survivor of rape until her Oscars performance. Gaga's reluctance to tell her family members shows just how unimaginably difficult it is for sexual assault survivors to tell their stories (The Rape Abuse & Incest National Network reports that only 32 of 100 rapes are reported to police), but unburdening herself from that shame proves just how freeing telling your truth can be.

Explaining that she never told her grandmother and aunt about her assault because she was "too ashamed" and "too afraid," Gaga detailed the conversation she had with her grandma after the Academy Awards.

"The morning after the Oscars when I talked to my grandmother Ronnie, with tears in her eyes I could hear them welling through the phone she said to me 'My darling granddaughter, I've never been more proud of you than I am today,'" Gaga wrote. "Something I have kept a secret for so long that I was more ashamed of than anything -- became the thing the women in my life were the most proud of."

"And not just any women," Gaga said, "the ones I look up to the most."

"#BeBrave #speakup #tilithappenstoyou," she added, hashtags that encourage others to raise their voices and not be ashamed.

Though feeling shame and embarrassment and every other emotion under the sun is incredibly common (not to mention entirely understandable) after experiencing such horrific trauma, Lady Gaga's message is an important reminder that sexual assault it is not the victim's fault and it is not their action to feel ashamed of. Gaga's relatives were commending her for her bravery in survival, for her courage to use her platform to tell her own story and speak out against sexual abuse and help countless others find their voices in order to do the same.

Gaga telling her story is proof that unburdening oneself from a decade's worth of shame is an action that is met with a feeling of freedom and hope. And though the most significant outcome is finding your own voice and courage in the process, having the unconditional support and praise from those whom you were too afraid to tell is the icing on the cake, that extra bit of confirmation that you did the right thing.

Hats off to Gaga and every person who comes forward to tell their truth, no matter how terrifying the process may be.

More like this
Lady Gaga Delivered A Million-Dollar Performance At A Private Wedding
By Maxine Harrison
What Is Ariana Grande's Net Worth? When It Comes To Money, She Has No “Problem”
By Hugh McIntyre
Travis Alabanza On Not Fitting In
By Sam Ramsden
Rylan Clark Is Ready To Party
By Sam Ramsden
Get Even More From Bustle — Sign Up For The Newsletter