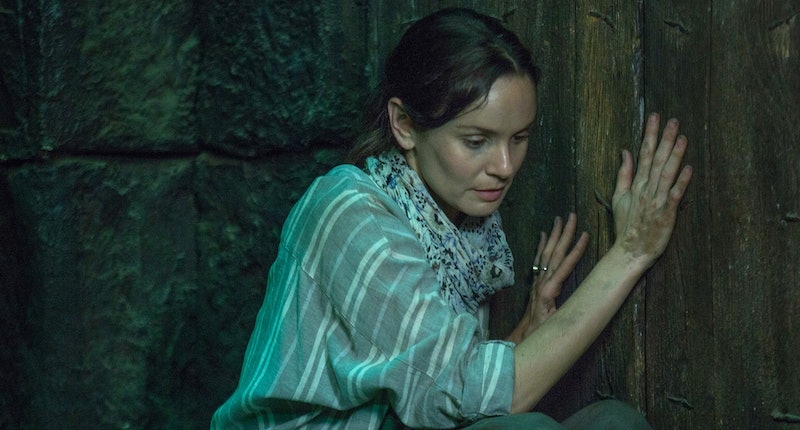 How far would you go to bring back someone you'd lost? The filmmakers behind the new horror film The Other Side Of The Door must be hoping that their audience will leave the theater challenged by that question. The movie stars The Walking Dead star Sarah Wayne Callies as Maria, a mother who loses her young son in a tragic accident while living in India. Desperate and anguished, Maria is offered possible relief by her housekeeper, no stranger to pain herself. Maria travels to an abandoned temple that supposedly houses the door to the next plane of existence. It won't bring her son back, the housekeeper cautions, but Maria can use the portal to communicate with him one last time. Maria is warned that she must, under no circumstances, open that door. But her aggrieved state of mind muddles her decision-making, and well, there are repercussions. Do those consequences leave the metaphorical door open for a The Other Side Of The Door sequel?

The movie sets itself apart by adding supernaturally horrific elements to the regular, old human kind of terror. In the clip below, Maria lays in a hospital bed with her daughter by her side, recovering from an attempt to take her own life. "I just can't bear life without him," she breathes. She plays that impossible feeling that tragedy inspires, like there's been a glitch in the matrix and something else has to happen for matters to be righted. If her son isn't there, then Maria can't be either. Whether or not Maria and her family survive the events of the film, I could easily see a different family in similar circumstances taking their place in a future film.

"I think grief and madness are really, really close to each other," Callies said in an interview with Hey U Guys. "And I think Maria spends a lot of this movie out of her mind." The actress said that she called upon her own feelings as mother to play the role, particularly as she was separated from her children to do the film. The force that drives Callies' character to do what she does is one that she was easily able to identify with, as a parent. I'd like to see that grief re-interpreted by another protagonist, especially if a sequel could deal with a different kind of core relationship. (Spouses, siblings, etc.) Callies shakes off a question about a possible continuation of the story. "If there's a future for [Maria], that's Johnannes' [Roberts, the director] problem, not mine!" Check out the rest of the interview below, but beware of mild spoilers.

No sequel plans have been announced yet for The Other Side Of The Door. The film opens in theaters on Mar 4, and box office success will absolutely be a factor. So far, the reviews are less than enthusiastic. Review aggregation site Rotten Tomatoes currently has the movie holding at 43% positive critical responses, and the Variety review called it "sporadically silly and patently predictable." Audiences may feel differently about The Other Side Of The Door, however, and when it comes to demand, its their voices that matter most.

More like this
'Dune: Part Two' Could Include A 'Little Women' Reunion
By Arya Roshanian and Alyssa Lapid
'Elvis,' 'Walk The Line' & 10 Other Movies Where The Actors Actually Sing
By Radhika Menon
Sparks Fly Fast & Furious In 'Honey & Spice'
By Bolu Babalola
Yes, Joseph Quinn Is Actually Playing The Guitar In This Epic 'Stranger Things' Scene
By Alyssa Lapid
Get Even More From Bustle — Sign Up For The Newsletter