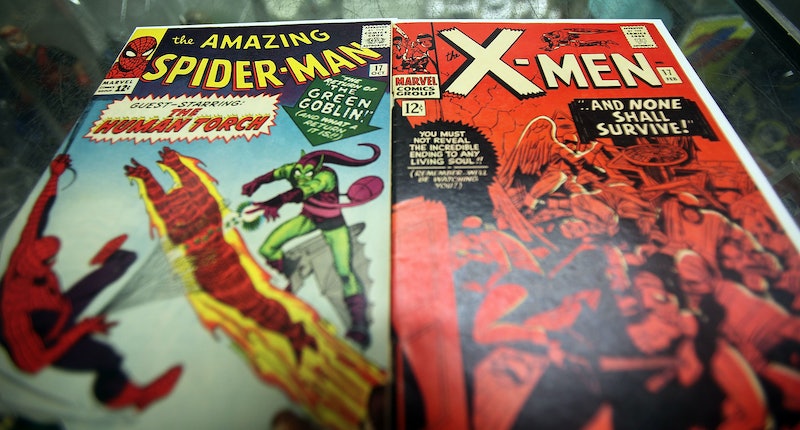 One comic book publisher's dalliance with coloring books for adults is more than just a fling. A fresh batch of Marvel Comics adult coloring books are on their way. Beginning this fall, the publisher plans to release three new "Color Your Own" books for your self-therapeutic consumption.

The first adult coloring book in Marvel's new batch is Color Your Own: Women of Power, which focuses on the publisher's badass ladies. "Showcasing images of the might and majesty of Marvel’s leading heroines," the press release states, "these images feature artwork from Marvel’s female led titles, variant covers and more!" The cover, which you can view at Comic Book Resources, features She-Hulk, Wasp, Jubilee, Spider-Gwen, and Medusa, among others.

Next up, just in time for the movie starring Benedict Cumberbatch, is Color Your Own: Doctor Strange. Marvel calls this offering "a tome of classic and contemporary depictions of the master of the mystic arts." Doctor Strange's cosmically weird enemies will be loads of fun to color, I promise.

The third and final installment of Marvel's next adult coloring book batch is Color Your Own: Star Wars. Although the cover features only the franchise's most iconic cast members, Marvel's press release notes that the images inside will include "a whole new cast of characters presented from Marvel Comics." Whether that includes Rey, Poe, Finn, BB-8, and Kylo Ren remains to be seen.

Keep your eyes peeled for the latest Color Your Own books, out from Marvel later this year. Here are the release dates you want to watch for:

More like this
10 Must-Read New Books Out This Week
By K.W. Colyard
Nicola Coughlan Shared A Lady Whistledown Excerpt From ‘Bridgerton’ Season 3
By Grace Wehniainen, Alyssa Lapid and Sam Ramsden
Viserys’ Fate On 'House Of The Dragon' Could Differ From The Book In This Surprising Way
By Grace Wehniainen
Read The First Pages Of Emma Rosenblum’s Highly Anticipated Debut, 'Bad Summer People'
By Samantha Leach
Get Even More From Bustle — Sign Up For The Newsletter