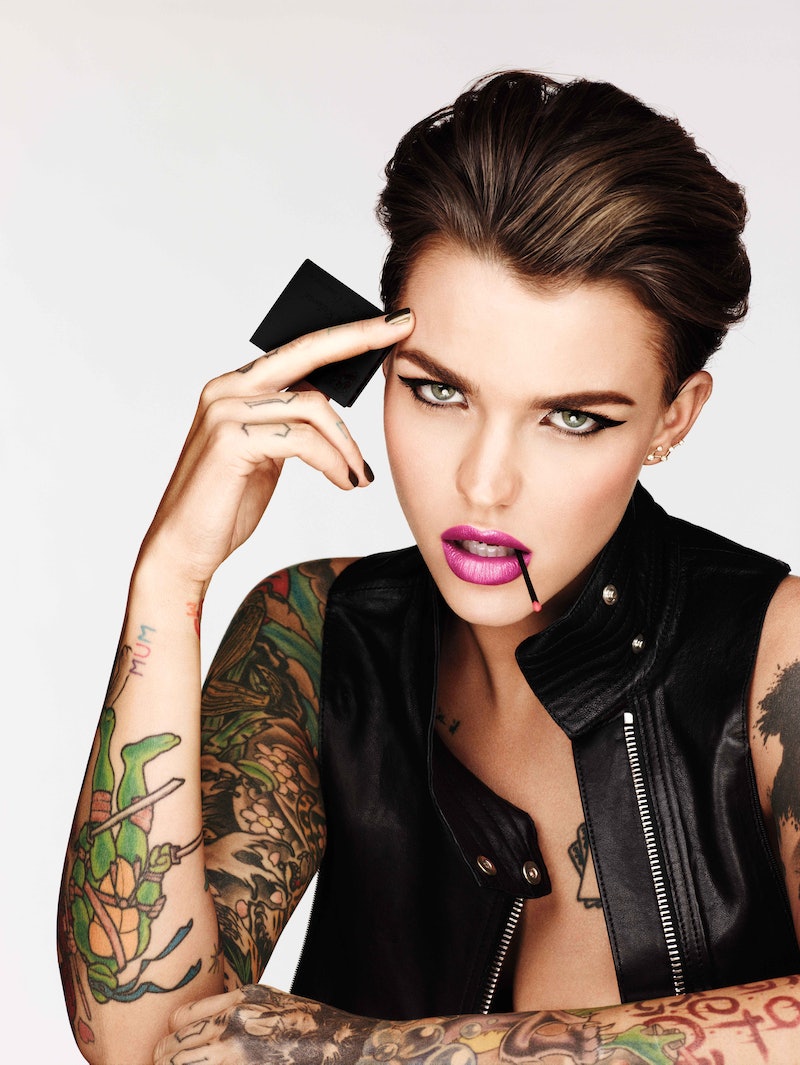 Urban Decay Cosmetics is a giant in the beauty world. Their diverse range of products are known for being uber-colorful and edgy, but with classic staples thrown in the mix. Now, Ruby Rose is upping the cool factor as their latest ambassador, but the question is will Ruby Rose x Urban Decay products be happening? With gorgeous non-binary looks, insane talent, and her ultra cool girl vibes, she's the perfect choice for Urban Decay, and products by Rose would only make the already awesome brand even better.

Urban Decay made headlines not too long ago when Gwen Stefani teamed up with the brand. Stefani's collaboration originally began in early 2015 when she became the spokesperson for Urban Decay's Ultraviolet Edge, an initiative designed to empower women around the world. Stefani released Enigma, a matte primer, with the brand, and 100 percent of the proceeds were dedicated to the Women's Global Empowerment Fund. Fast forward a few months, and Gwen Stefani x Urban Decay officially happened. Stefani's incredible palette — which is still shoppable — features incredible neutrals with pops of blue and pink in a move that's totally Urban Decay. The collab was so successful that Stefani's partnership has now branched out into a full collab featuring blushes and lipsticks. That all said, it's hard not to wonder whether Ruby Rose's new position as the Most Addictive New Vice will lead to a Ruby Rose x Urban Decay product line.

As the Most Addictive New Vice, Rose's role is a little vague, but Urban Decay has offered some clues as to what all it could encompass. Urban Decay describes Rose's position as one where she'll keep, "rocking our world and spreading the gospel of our self-expression, addiction to color, and 'beauty with an edge.'" Since that's the case, is there a better way for Rose to spread the word about Urban Decay than with her own range of products?

While the announcement was just made on Wednesday, there are a few tidbits of sly knowledge floating around regarding the specifics of Rose's role, so what clues make me think Ruby Rose x Urban Decay products could happen?

I'm excited for Rose's billboard, too, but the most important part of this post? Rose saying, "People are going to freak out when they see what we have coming!!" Like some killer shadows for smoky eyes, maybe?

Like Rose, Gwen began her work with Urban Decay as an ambassador. While Gwen worked with the Ultraviolet Edge, the title eventually expanded to include her own collection. Fingers crossed it'll be the same with Rose.

Urban Decay was pretty mum when it came to Rose's stint with the brand. The company explained, "Better things come to those who wait – just give it time." They even went on to add, "We’ve waited 20 years to do something like this – patience is a virtue. We’ll share more when we’re ready!" Basically, I think this is all one big ploy for them to pull a Beyonce and drop a collab on us at any second. Fingers crossed.

Rose's Passion For The Brand

Rose was incredibly upfront about her admiration for Urban Decay when her role was announced. She explained, "Urban Decay believes in supporting individuality and personal self-expression — two values I hold very dear — because everyone deserves the freedom to explore their personality and discover their true selves.”

Basically, all signs are pointing to Ruby Rose x Urban Decay products happening, but until that announcement, I'll just be over here stalking their website.