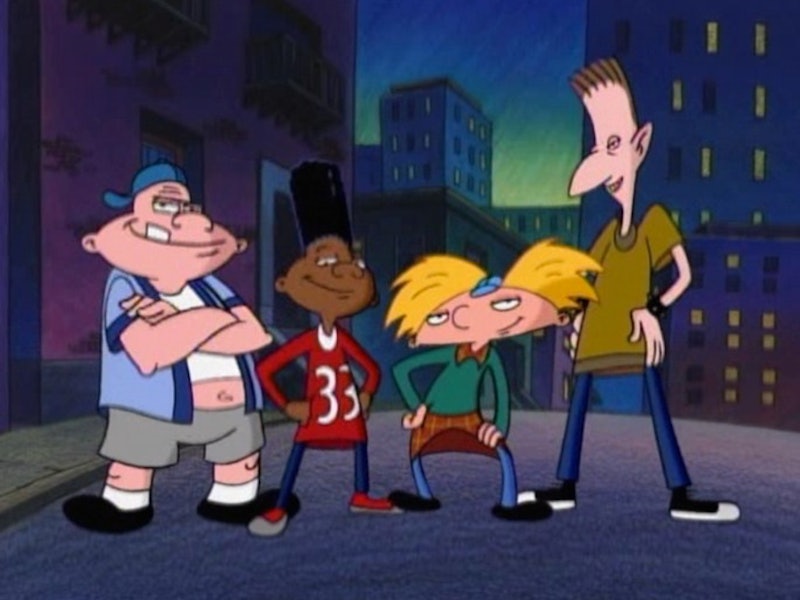 Prepare to get psyched — Hey Arnold! creator Craig Bartlett announced on his Instagram that the Nickelodeon TV movie Hey Arnold: The Jungle Movie is officially happening. In even better news, the movie will be a two hour, two-part event. Before you lose yourself in squee, it's time to start seriously thinking about what the Hey Arnold! movie needs to accomplish. The movie is set to finally reveal what happened to Arnold's parents, but there are so many things that need to happen in The Jungle Movie to make it fulfilling.

Fans of Hey Arnold! have waited a long time for this, so it's not enough that the gang will be back together again. There are questions that need to be answered, love to be requited, and friendships that need to be affirmed. A cartoon as special as Hey Arnold! needs a movie capable of living up to the funny, emotional highs of the original. More than a decade has passed since the final episode aired in 2004, but the movie is set to pick up where we left off with Arnold, Gerald, and Grandpa Phil.

With no massive time jump to worry with, The Jungle Movie only has to concern itself with bringing the world of Arnold back to life, and including enough answers and throwbacks to make your nostalgia for the series pay off.

This is a big one: Arnold needs to find his parents and find them alive and at least mostly well. That is a reunion that has been in the making for 20 years now. If he finds out they died after two decades (in real world time), that would be the hugest bummer of all time.

2. Helga & Arnold Discuss The Revelation That Helga Has Feelings For Him

Helga finally confessed her feelings for Arnold in the last movie, but then they decided to pretend nothing happened. That is a perfectly reasonable thing for nine-year-old kids to do, but I want there to be an actual discussion — preferably with hugging.

3. Helga Gets Over Arnold

I know Helga's love for Arnold is one of her driving characteristics, but she's young and awesome. I think it's time for her to accept Arnold is her friend, and move onto her next crush. With middle school right around the corner, she should keep her options open.

If this movie is going to be set in a jungle, then I am going to need Gerald to channel his inner Indy. Not only is he the coolest kid in the group, he also drops the best pop culture references. Seeing him get his action hero on would be awesome.

5. Arnold Tells His Grandpa Thank You

Arnold is a sweet and caring kid, so I know Grandpa Phil knows how thankful Arnold is for everything his grandparents have done for him. Still, I want one, beautiful moment between Arnold and Grandpa Phil in the movie where Arnold thanks him for taking such amazing care of him while his parents were lost. Their relationship was one of the show's best, and one big moment for them would make the movie even more special.

6. The Green-Eyed People Get An Explanation

Like something out of The X-Files, the Green-Eyed People are a bit of Hey Arnold! mythology that need explaining. Since the movie will be taking Arnold and friends into the jungle, I think it is safe to say it will finally tell fans more about the mysterious tribe.

The disappearance of Mr. Smith, who moved out after three years of living in the boarding house without being seen, has always haunted me. What was his deal? Was he keeping tabs on Arnold? Was he spy? A recluse? The world needs to know!

8. Arnold Runs Into A Thornberry (Of The Wild Thornberrys, That Is!)

Can a Nickelodeon character really go into the jungle without meeting up with a member of the Thornberry family? The reference can be crazy subtle, I just want confirmation that Eliza and her family still exist out there somewhere, and maybe even know Arnold's parents. Donny could be Arnold's little brother! I know, I know, I've thought about this way too much.

9. Part Of The Movie Takes Place In The Boarding House

New locations are great and all, but a huge part of Hey Arnold!'s charm was in its depiction of the boarding house community. I'm fine with going on a grand adventure, but part of the story needs to be grounded in the familiarity of home.

10. Gerald Gets To Be With Arnold When Arnold Finds His Parents

Arnold and Gerald are basically brothers. Gerald needs to be there when Arnold finds his parents. If the movie is going to be one grand adventure, then I want Gerald to be by Arnold's side every step of the way.

It's time for Arnold and his classmates to finally move on from the fourth grade. They need to start growing up in meaningful ways, and letting them leave fourth grade behind would be a big, symbolic step forward.

12. Arnold Stays With His Parents

Would it be heartbreaking to see Arnold leave his friends and grandparents behind? Absolutely, but having him join his parents on their adventures would also be an emotionally rewarding way to wrap things up. Hey, if I'm going to cry over a 20 year old cartoon, I want a good reason.

I'm sure whatever happens in Hey Arnold: The Jungle Movie it will be amazing, but it might be extra amazing if the movie manages to squeeze a few of these things in the story.