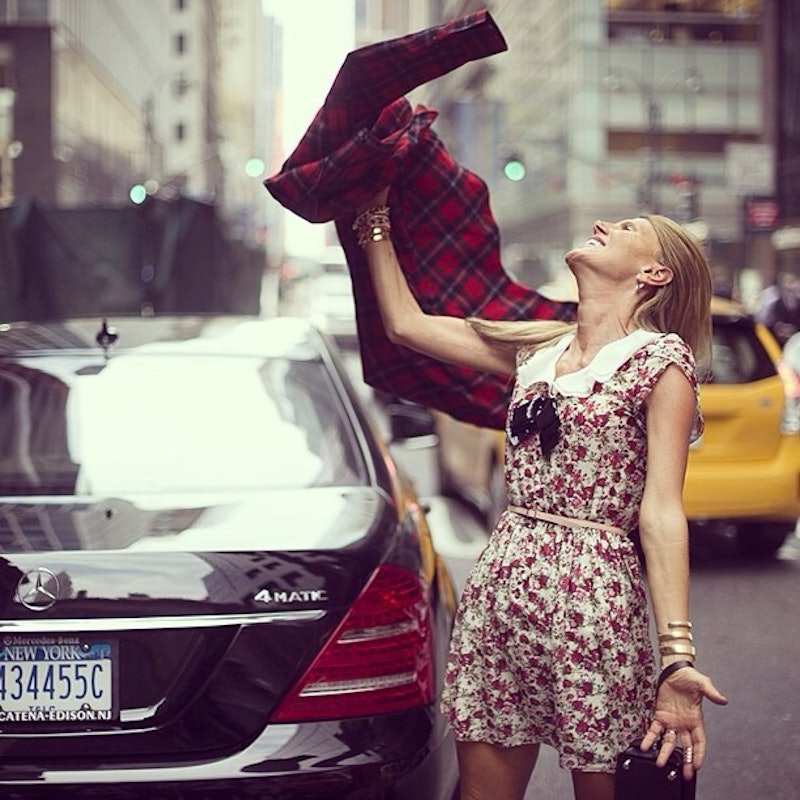 According to The Cut, the Global Language Monitor has named NYC "the reigning fashion capital of the world" in their 10th annual 'Top Fashion Capital' survey. New York rose one spot from the previous year, beating out Paris for number one by only 0.5 percent. Paris isn't hurting too badly, however, as the city won the title of Top Global Fashion Capital for Haute Couture. Really, who could possibly be surprised by that result?

London slipped down to the number three slot, after holding court at number one since 2011. Sorry, Kate Moss. In other big news from the survey, L.A. has risen to the top four, jumping up five whole places since last year. That may have to do with more California-based designers joining the high-fashion game (Rodarte, anyone?), and an increase in the number of high-end boutiques in the L.A. area. It seems we're seeing fewer and fewer Juicy velour sweatsuits on the West Coast these days.

How did the Global Language Monitor determine the rankings? It appears that we have social media to thank. According to The Cut:

Over the course of three years, the GLM mined 250,000 of the blogs, print outlets, and social media channels for fashion buzzwords associated with haute couture, ready-to-wear, and fashion. The company tracked the frequency and contextual usage of the words and used those numbers to create a ranking of global fashion cities. So basically, New York City has appeared in relation to words like fashion, fashionable, best designers ever, most stylish people in the world, better than Paris, and so on, just enough times to earn the top spot by a narrow 0.5 percent.

Rounding out the top ten are Barcelona, Rome, Berlin, Sydney, Antwerp, and Shanghai.

To maintain the number one spot, fashion-minded New Yorkers should keep taking to the Web with their street style selfies and trendy hashtags. And it wouldn't hurt to choose a bagel over a croissant every once in a while, just to show some city pride!

More like this
Here Are All 703 Outfits Rachel Wore On Friends
By Kat George
Jude Bellingham’s Superstar Football Talent Runs In The Family
By Maxine Harrison
The David Beckham Qatar Controversy, Explained
By Sophie McEvoy
Twitter Is In Awe Of Alex Scott & Her Show Of Solidarity At The 2022 World Cup
By Sophie McEvoy
Get Even More From Bustle — Sign Up For The Newsletter