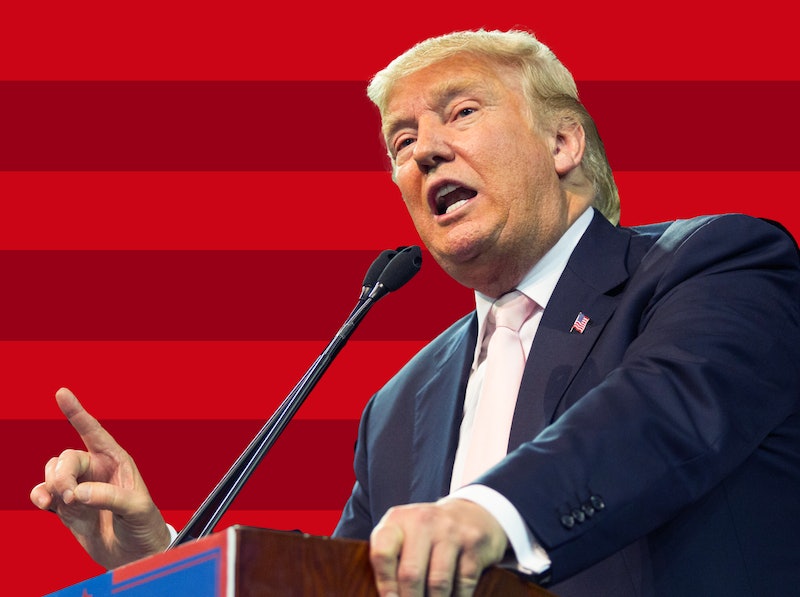 Donald Trump better gear up, because he's going to have to compete with his worst nightmare — a less elite sounding version of himself. If that sounds a little perplexing, you haven't watched John Oliver's 22-minute Last Week Tonight rant on the GOP candidate. Less than a week after the epic segment aired, Oliver's own creation — Donald J. Drumpf — is boasting his own Wikipedia page. Talk about a rapid rise to fame...

On a Feb. 28 segment of his show, Oliver encouraged his audiences to begin referring to Donald Trump as the "dopey" (to use one of Trump's favorite words) Donald Drumpf instead. In actuality, Oliver simply took Donald's last name, which has become a brand name for his empire, and swapped it out for his conveniently less attractive ancestral surname.

Oliver kicked off the segment by comparing Trump to a back mole America can't ignore for any longer. And that was the mildest of his criticism. One particular remark was packed with sarcasm and mockery on various levels: short fingers, gold sharpie, the aura of a cheap tool.

The very fact that he's so sensitive about [his fingers] is absolutely hilarious, as is the fact that those notes were apparently written in Gold Sharpie, which is so quintessentially Donald Trump: something that gives the passing appearance of wealth, but is really just a cheap tool.

According to The New York Times, Google Trends show that Donald Trump is the most-searched-for candidate in race. As of March 1, Donald Drumpf was the second most searched. Yes, you read that correctly — Donald Drumpf is being searched more frequently than even Ted Cruz and Marco Rubio.

There's something incredibly satisfying about that. Now, we just need to put Drumpf on the ballot instead of Trump.

With all of those searches, it was just a matter of time before Wikipedia provided all of the answers the Drumpf inquirers needed. The page describes Drumpf as a "parody character" and includes sections titled "Etymology" and "History." A photo captioned "Donald J. Drumpf looking his best" is funny at first-glance, but also shows the brutal nature of the joke itself, which goes as far to poke fun at the Donald's appearance.

That being said, Drumpf fans have zero reason to question their character because Donald Trump is the master when it comes to resurrecting high-school aged drama and name-calling. By normalizing an oftentimes pompous and immaturely crude attitude, he has made it "okay" for us to do the same to him. If the Drumpf Wikipedia took the joke a step too far — it linked the page to Trump's own campaign page — it was well-deserved.

And in case you think it didn't go far enough, the page's brief length suggests there's still much to be added. Trump needed to taste his own medicine sooner than later.

Now, just one question remains: If Trump becomes president, will we refer to him as President Donald Drumpf?

More like this
'The Summer I Turned Pretty' Using “Cruel Summer” Has Twitter Begging Taylor Swift To Release A Music Video
By Radhika Menon
For These Abortion Clinic Volunteers, Going TikTok Viral Is A Risk Worth Taking
By Audra Heinrichs
YouTuber Runs Into Margaret Sanger’s Grandson While Filming
By Alexis Morillo
Everything To Know About 'The Undeclared War' Season 2
By Rachel Mantock
Get Even More From Bustle — Sign Up For The Newsletter