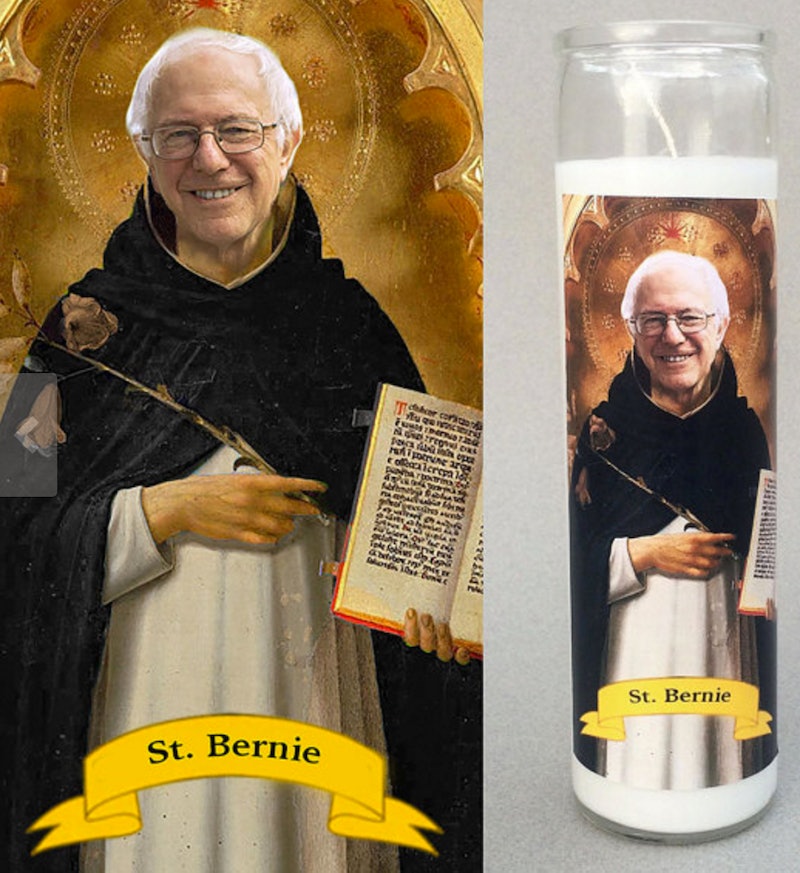 The race for the Democratic presidential nomination might be undecided still, but one contest has been won: who has the best campaign merchandise — official and unofficial. Clinton may have the support of some Obama campaign alums, but the merchandising award, hands down, goes to Sanders. Don't get me wrong: Hillary's are great too. The designs are spot-on, and some slogans like "Love trumps hate" and "Make herstory" are genius. Even I'm considering a pantsuit tee. But when you get outside the official campaign stores of both candidates, the absurdly brilliant Sanders gear takes home the prize.

Perhaps it's because of the mix of socialists, young people, and the occasional granola-eating grandparent who are supporting him. They must be the creative types driving this retail revolution. Despite wanting to take money out of politics — not to mention providing free college tuition and health coverage to every American — the Bernie Sanders fans can't get enough of stuff with his face on it. Or his hair. Or his glasses. Sanders' mug is the new Obama "O" — a logo. And you won't believe the wild mix of things they're putting it on. Sanders' official merchandise is good, but the unofficial market is huge. And the ridiculous creativity his supporters are designing and donning deserves a slow clap. Try to hold back but you'll be feeling the merch Bern.

A step in the other direction, maybe this is a good bet if you're extremely religious — or Trump has instilled the fear of God in you.

Maybe not quite the way they meant it in Rent, but these lighters put the "Bern" in "burn."

4) You Believe He Can Fly

Coming for you right out of the Space Jam soundtrack are those old R. Kelly lyrics. Make Bernie swoosh.

Have your coffee with some reassurance that it'll all be okay. The glasses and messy hair say it all.

6) Bernie Was A Babe

Perhaps you wished he'd run for president 50 years ago. Can't get enough of his college look? Or feeling in your prime yourself? This button.

7) Back To The Future

Or maybe it's the older, wiser Bernie that has you motivated. With this shirt maybe you can even skip the primary. No more GOP debates!

It could also be that you don't care how Bernie looks — you just want to be comfortable while listening to his speeches and diatribes against Wall Street.

Maybe instead of Fruit of the Looms, you'd rather see Bernie in Robin Hood tights. This merch item is made 1000 times better in that it's a temporary tattoo. Put one on every time you head into a bank.

10) When Glass-Steagall Gets You Going

There's nothing better than separating the big banks. Just beware of wearing around Bernie bros.

11) For The Scientists Among You

Or the inner high school chemistry expert. Or for fans of the aesthetics of the Periodic Table.

Love to sew? Know somebody religious who does that's not quite on the Bernie train? You're welcome.

For the little ones feeling the Bern. So cute!

The real reason why there's so much Sanders gear on the web. He's magical, and this unicorn proves it.

Choose your favorite and turn up to the next rally in style. You can raise your lighter in the air and sway for a single-payer system. You'll be glad you came prepared.

More like this
The 50 Cheapest, Most Popular Fashion Items On Amazon
By Claire Epting
Every Single Big & Small Way You Can Fight For Abortion Rights
By Tess Garcia
Police Shove 'Full House' Star Jodie Sweetin At An Abortion Rights Protest
By Radhika Menon
5 Ways To Stand In Solidarity With Women In America From The UK
By Sophie McEvoy
Get Even More From Bustle — Sign Up For The Newsletter