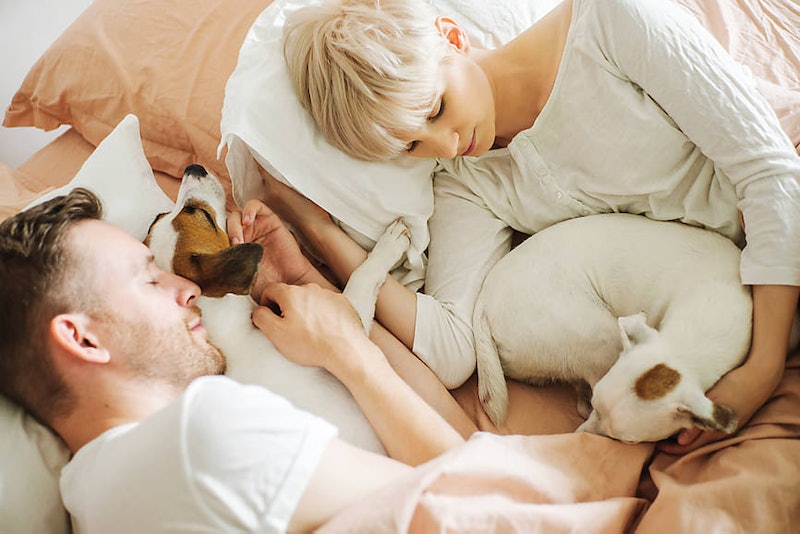 Despite what deeply ingrained traditions and old-school stereotypes would have us believe, the best type of partnership is one that's split 50/50. I'm talking about equal sharing of chores, money, decisions — the whole thing. Because when you have a more equal relationship, everyone feels heard, and necessary, and supported.

And yet, however progressive and wonderful we try to be, it's still totally normal to fall into some pretty retro traditions of inequality. This happens when your partner reaches for the restaurant tab without even thinking because they think they're "supposed to," or when your spouse takes it upon themselves to do all the chores. Set-ups like these can work out, if you agree to them. But when they just kind of happen because that's "the way the world works," you may have a problem on your hands.

Inequality in a relationship can also spread beyond the potential problems of traditional gender roles. Sometimes, it doesn't matter if you're a guy or a girl or somewhere in between — if you don't listen, offer up your love, or be ready with support, you're making it impossible to have an equal and fair partnership.

So if you're ready to come correct with your significant other, then here are some ways to divvy things up, be more fair, and ultimately have a more healthy relationship:

1. No One Dominates The Conversations

Sometimes quiet introverts pair up with chatty, life-of-the-party extroverts. And while this is just about as uneven as it gets, it can still somehow work. I mean, if you relish the fact your partner does all the talking, or you love waxing poetic while your SO gladly listens, then keep doing your thing.

But your partner should never talk over you, or become despondent, when it is your turn to speak. As Wiggin noted, "In an equal relationship, nobody should dominate the conversation. To even things out, make sure you give each other a chance to chime in. Interrupting is OK ... but make sure to circle back to any ideas that didn’t get fully expressed."

2. You Both Support Each Other's Careers

At no point should you be moving across the country for your SO's new job when there's absolutely nothing in it for you. It may feel romantic and adventurous, but it'll just lead to resentment in the long run. That's because such a move implies your goals don't matter, or that they can be put on the back burner, and this does not an equal relationship make.

According to Wiggin, "If you suddenly land your dream job and it’s all the way across the country, he should be open to discussing ways for you to follow your dreams and maintain your relationship. However ... it’s not going to work unless he also has a vision of how this could be positive for him ..."

3. You Have A Clear Cut Money Agreement

Who pays for what is affected by all sorts of things — how much each partner makes, etc. etc. So it's important to discuss how it's all going to go down before you find yourselves sitting awkwardly in a restaurant, or arguing over a household bill. Once an arrangement has been made, no one will feel used, or broke, or embarrassed when it comes to picking up the tab.

4. The Chores Are Evenly Divided

Part of being in an equal relationship is running a household together. That means you both are in charge of keeping your apartment fully stocked and running smoothly. If it becomes any one person's issue (unless you set it up this way), it's going to feel totally unfair and unequal and you'll find yourself pouting as you trudge off to buy toilet paper.

To prevent such a gross injustice, you both need be clear about who should be doing what. As Molly Triffin noted on DailyWorth.com, "Get in the habit of doing a quick debrief about what needs to get done ... It can also help to designate some household tasks that belong solely to your partner, whether that’s cleaning the garage, taking out the trash, doing dishes, whatever. That way there’s no gray area about who’s responsible for what."

5. You Both Have A Say In Big Decisions

New jobs, moving, vacations, what to watch on Netflix... these should all be mutual decisions you make together. Because, according to Wiggin, if one person's preferences continually dominate, the relationship is bound to feel lopsided. So don't shut down your partner's ideas, and don't let them call an end to a discussion before it's even begun. Talk things out, and look for ways to compromise so everyone is happy.

6. The Love Is Evenly Distributed

It can sometimes fall on one person's shoulders to be the glue in the relationship. But it's up to both of you to show up with flowers, suggest a date night idea, or make two bowls of ramen instead of one. It shows you are both putting effort into the relationship, which will prevent the dreaded feelings of being used or ignored.

7. You Put The Same Amount Of Effort Into Forgiving

Something's wrong if one of you is always getting away with murder, while the other apologizes at the drop of hat. In a fair relationship, you should both be willing to offer up forgiveness. As Mélanie Berliet noted on ThoughtCatalog.com, "No matter how ugly things get, you both set aside your egos at a certain point and try your best to see things from the other’s perspective ... You want it to become second nature to put yourself in your significant other’s proverbial shoes so that forgiveness comes quickly."

8. Both Of You Are Allowed To Have Flaws

A fair relationship will be full of support and chances to better yourselves, but it will also allow both partners to be their true, messy, freakish selves without judgement. According to Berliet, "When it comes to each other’s physical and emotional flaws, you don’t just accept them. You fully embrace them. We’re all a little deficient in some ways, and by loving each other not just in spite of but also because of the idiosyncrasies and weirdnesses, you permit each other to be authentically human."

Relationships are hard, but they're even harder when there's unfairness afoot. Talk to your SO about all the things that can make a relationship feel unequal — like the division of money, decisions, and chores — and hopefully it will feel a lot more balanced.

More like this
20 Things You Should Never Tolerate In A Relationship
By Rachel Sanoff and Kathleen Ferraro
The Best Time To Date After A Breakup, According To Experts
By Bustle Editors
The Top Mistakes Scorpios Make In Relationships (& How To Avoid Them)
By Nina Kahn
Are Leo & Capricorn A Good Match?
By Kristine Fellizar
Get Even More From Bustle — Sign Up For The Newsletter