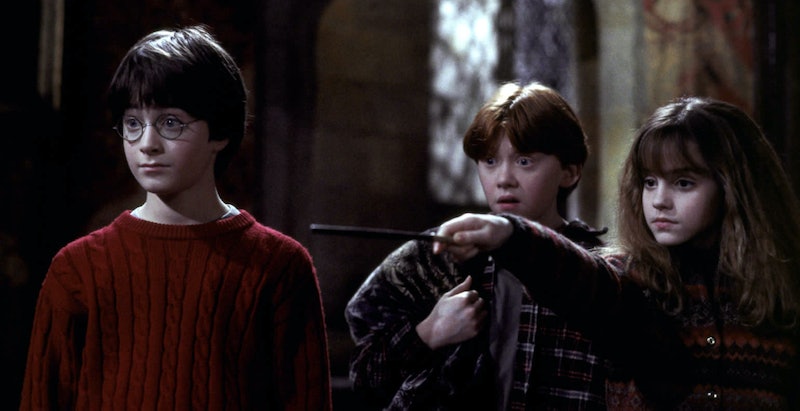 When you first hear the words " Harry Potter effect," there is a high probability that you'll reflect on some instances from your childhood with varying degrees of sheepishness. The effects of Harry Potter the generation that grew up with it were far from subtle, from the stick wands we brandished on the playground to the very real tears of grief we felt for our dead faves. It goes without saying that this book series' effect on us will last a lifetime, but this latest research trend shows that not only will we be affected by Harry Potter's legacy, but so will the next generation of readers — even if they never end up reading the series themselves.

It sounds a little spooky, but it's actually quite simple. The publishing industry used to assume that the demographic reading Harry Potter books, namely children, would only want to digest a certain amount of material. Because of the massive success of the Harry Potter series, though, children's books on the whole are becoming longer. Book List Reader conducted a study that shows that middle grade books have gotten 173 percent longer over the past 40 years, but there is a marked difference in the growth acceleration right in the sweet spot where Harry Potter hit the literature scene. Suddenly it was apparent that not only would longer books hold the younger crowd's attention, but that they'd demolish them when given the chance. And that, in turn, opened the door for a lot of other authors to come up with original, usually fantasy-based content that catered to an audience that was clearly hungry for it.

What I find especially remarkable about this is that there has been a lot of debate in the past as to whether J.K. Rowling's epic series is truly considered "children's literature". It's not even a matter of adults enjoying the books (which obviously we do), but rather the very unusual arc of the series. Never has a popular series taken such a marked turn from squarely children's lit territory into such a dark, decidedly YA, if not occasionally adult territory. In the context of the time it wasn't much of a problem, since the kids who were hooked on the series from the beginning were grown up and ready for it when the later books came out, but it's interesting to navigate it with children who are starting to read it today and have the full series accessible to them. I know some parents of kids who will only let their kids read the first two or three and are "saving" the rest until they're older, to be dished out at certain intervals when they're ~ready~ for them.

But regardless of J.K. Rowling's intended audience for the series, it seems the Harry Potter effect is here to stay — both in the longer books and for our permanently, perilously nerdy hearts.