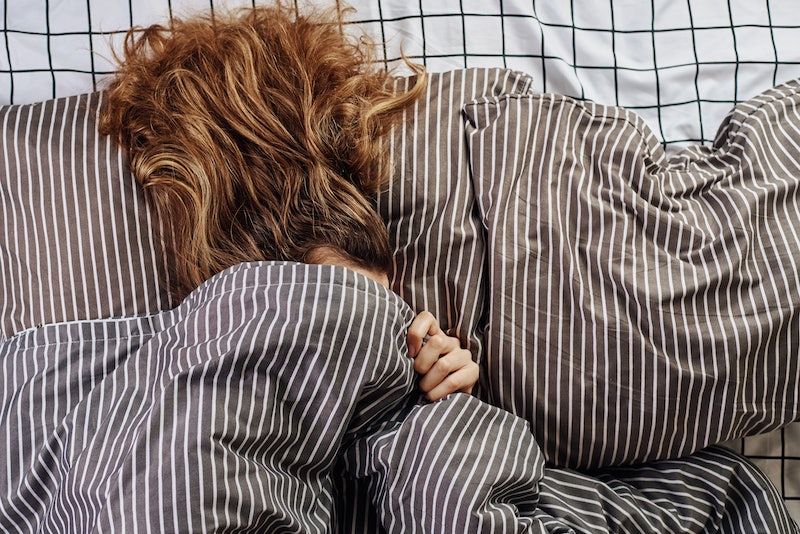 In today's culture, it can be challenging to maintain a healthy sleeping schedule. We've all got people to see, work to do, and Netflix to binge-watch. But even on the nights that we do get enough hours of sleep, that doesn't always mean we're able to sleep well — many of us have our rest disturbed by partners, kids, pets, street noise, anxiety, or our phones. While most of us think that not sleeping at all is risky, we tend to believe that having choppy, interrupted sleep can't do much damage. But the facts are that even one night of poor sleep can do terrible things to your body — messing with everything from your memory to your sex drive. So if you've been sleeping poorly lately, you might want to consider talking to your doctor about it, or at least trying some at-home remedies for sleep problems. Because what happens to your body when you don't sleep well is actually kind of terrifying (and it turns out that "catching up" on sleep isn't really possible).

While sacrificing a quality night's sleep to either go on late-night adventures with friends, achieve our personal goals, or make time for our families is part of life, the health risks that accompany poor sleep are serious. So whether you have needy toddlers waking you up throughout the night, you're in a working-multiple-jobs phase of your life that has you relying on naps, or you just started dating someone new and have been happily sacrificing sleep for sex, you should know how your body reacts to low quality sleep.

1. Your Reaction Time Slows Down

As you may have already heard (and have likely experienced for yourself by now), poor sleep can slow down our reaction time. This may not seem like a big deal if you don't do a lot of driving, or if your job isn't fast-paced or physically demanding — but slowed reaction time can be really dangerous. In fact, studies have shown that poor sleep impacts our reaction time just as much as alcohol does. Furthermore, poor sleep and sleep loss negatively affect reaction time so much that inadequate sleep is technically considered a public safety hazard by The National Highway Traffic Safety Administration. As the Center for Disease Control reports,

The National Highway Traffic Safety Administration estimates that drowsy driving was responsible for 72,000 crashes, 44,000 injuries, and 800 deaths in 2013. However, these numbers are underestimated and up to 6,000 fatal crashes each year may be caused by drowsy drivers.

I'm sure you don't need me to tell you how a poor night's sleep can wreck your concentration and focus at work the next day. But what you might not know is that poor sleep also makes it more difficult for your brain to secure your memories from the day before. As WebMD explains, for a memory to become a memory, it has to go through three steps — steps that you brain has a hard time going through when you get a night of bad sleep.

The first step, of course, happens when you experience the event. The second step, which is called "consolidation," occurs when the memory becomes stable in the brain. The third step is "recall." According to WebMD, though, your sleep cycles determine whether or not you can even get to the third step. As Camille Peri writes in her feature for the site, "various sleep cycles play a role in 'consolidating' memories in the mind."

So basically, if your sleep cycles are interrupted due to anxiety, tossing, turning, being sick, or whatever else keeps you up at night, that second step never happens. Essentially, a poor night's sleep means you'll lose more than your ability to focus the next day — you'll actually lose memories, too.

Poor sleep and sleep deprivation, have been shown to decrease sex drives in both men and women. (I can definitely attest to this personally, and you probably can, too). However, for men, not getting a good night's sleep can actually result in more than lowered energy levels and a subsequent disinterest in sex — it can impact how much testosterone their body makes.

In their post on the topic of low testosterone and sleep deprivation, Everyday Health references a 2011 study published in the Journal of the American Medical Association (JAMA). The site reports that during the study, 10 men volunteered to sleep a mere five hours per night over the course of eight days. In addition to progressive energy loss, this experiment resulted in a 10 to 15 percent decrease in the men's testosterone levels. It's also worth noting that men who suffer chronic sleep loss, or poor sleep, due to sleep apnea typically have low testosterone levels as well.

When we don't get an adequate night's sleep, our body reacts by releasing excess amounts of the stress hormone cortisol. At best, excessive amounts of cortisol (which is the same hormone our bodies release when our "fight or flight" response is triggered) can deteriorate our skin's collagen and ultimately cause lackluster skin. At worst, excessive release of cortisol can, over time, contribute to the development of diabetes.

As adults, the human growth hormone is responsible for increasing muscle mass, thickening skin, and strengthening bones as we age. More importantly, though, this hormone is only released during sleep. As sleep expert Phil Gehrman, Ph.D., explains on WebMD explains, "It’s during deep sleep — what we call slow-wave sleep — that growth hormone is released. ... It seems to be part of normal tissue repair — patching the wear and tear of the day."

6. Your Appetite Gets All Messed Up

Poor sleep tends to stimulate our appetites. While you may know this, what you may not know is why this happens. When we sleep poorly, it changes how our bodies produce the peptides which are responsible for regulating our appetites. Inadequate sleep causes an increase in the peptide ghrelin (which is responsible for stimulating hunger), and a decrease in the peptide leptin (which is responsible for letting our brain know when we're satisfied). So basically, losing sleep not only increases appetite, it impairs your brain's ability to know when you're full.

Moreover, studies show that losing even 30 minutes of the sleep you need per day can negatively impact metabolism and increase your odds of developing diabetes. This is because poor sleep specifically increases our appetite for foods that are high in both carbohydrates and fat.

7. You Could Suffer Brain Damage

As the Huffington Post reported last December, even one night of sleep deprivation has been linked to a loss in brain tissue. Additionally, Huffington Post reported that, back in 2014, researchers at the University of Pennsylvania's Perelman School of Medicine and China's Peking University found a connection between chronic poor sleep and brain damage when they teamed up to study the affects of chronic poor sleep in mice.

The scientists wanted the mice's sleep schedule to mimic that of a human shift worker, so they put the mice on a rotating sleep schedule of normal rest, short periods of wakefulness, and extended periods of no sleep. The researchers were specifically interested in seeing how this would affect the locus coeruleus area of the brain, because, as Huffington Post explains, LC neurons "participate in a wide range of important neurological functions, including regulation of arousal, attention and wakefulness, as well as memory, emotional responses and cognitive function." Eventually, the scientists found that, although the mice managed to cope with short-term periods of poor sleep, "periods of extended wakefulness brought diminished function and eventual loss of brain cells."

If you've been purposely skimping on sleep lately, or you just haven't been able to get a good night's sleep in a while, don't take it lightly. How well, and how much, you sleep can directly affect your health and even your lifespan. So whether you need to make an appointment with your primary care physician to discuss your sleep issues, or you just need to invest in some melatonin, make sure you're doing all that you can do to get the quality sleep you need.

More like this
Bonnie Milligan's Wellness Routine, From Daily Journaling To Drugstore Teas
By Jessica Derschowitz
18 Hinge Prompt Answers To Try If You’re Looking For Something Casual
By Lexi Inks
The Case For Following A Menstrual Cycle Workout Plan
By Emma McGowan and Carolyn Steber
5 Signs You Have A Toxic Relationship With Yourself
By Lexi Inks
Get Even More From Bustle — Sign Up For The Newsletter
From hair trends to relationship advice, our daily newsletter has everything you need to sound like a person who’s on TikTok, even if you aren’t.