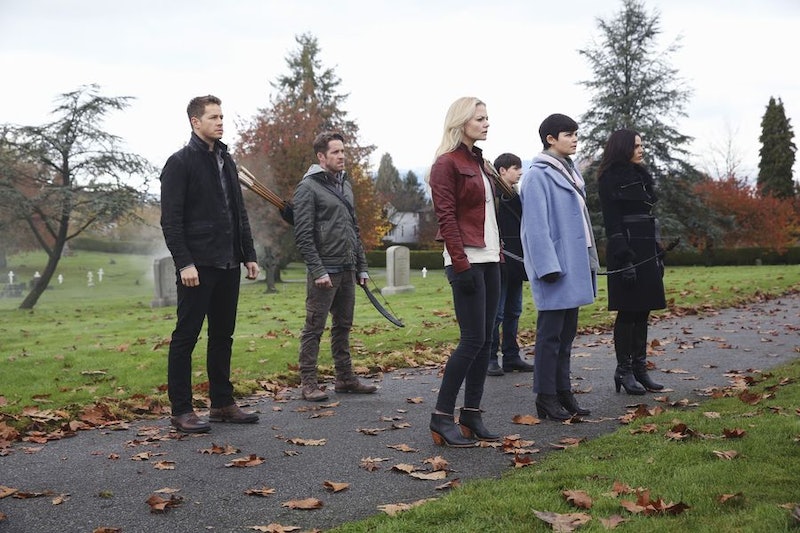 By now we know that being the Dark One means you have a tendency to give into your darker instincts, which is not exactly a comforting notion given that the Once Upon a Time gang has journeyed to the Underworld. I mean, that's pretty much a breeding ground of dark temptation, right? But just in case that alone wasn't worrisome enough, Sunday night's episode also saw Rumple reunite with his father, Peter Pan, who made his son an interesting offer. After claiming to regret his actions of the past, Pan revealed that he wants out of his current circumstance and needs Rumple's help in order to do it. But will Rumple actually help Peter Pan escape the Underworld? Let's just say it wouldn't be totally out of the question for him to double cross his "friends."

You see, in order for a soul to leave the Underworld, another soul has to be left in its place (a soul exchange, if you will). And given that Rumple didn't come there alone, Pan plans on replacing one of them during their journey back to Storybrooke. Thankfully, Rumple doesn't seem that onboard with his dad's idea, considering the bad blood that still clearly exists between them. But if given the right incentive, I wouldn't be surprised if Rumple ended up having a change of heart, which leaves us with one very disturbing question — who would the unlucky target be?

My immediate thought was Emma since she's already threatened to tell Belle that Rumple is the Dark One again, which could put his relationship in jeopardy. However, to be fair, the entire gang knows the truth, so I don't see how leaving her behind would help in that particular cause. (Unless he tried to just leave everyone behind.) Regina is another viable option since she's also magically powerful and could be the next biggest threat to him. Then again, Rumple is always one for making deals. Perhaps he'll go directly to Hades himself and make an offer that even the devil himself couldn't refuse. Either way, it's not a good sign that Pan and Rumple are in the same universe again. Because wherever they are, death and destruction are sure to follow. Watch your back, Team Swan!