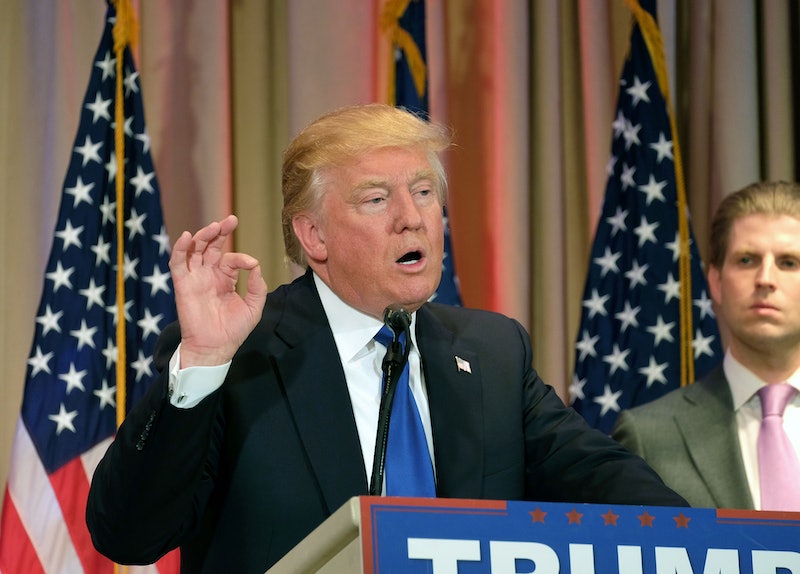 To the befuddlement of everyone who believes in the firm separation of politics and reality television, Donald Trump is now the likely Republican nominee for president, which means it might be time for those of us who have been trying to avoid him to listen to a few of his speeches. If you have trouble sitting through them, though, never fear: There's now a Markov chain generator for Donald Trump speeches. And as someone who actually has read a few of Trump's real speeches, I have to say, it's pretty spot on.

Donald Trump currently has the most delegates in the Republican presidential primary; he also has a clear path to the nomination, especially after winning a majority of Super Tuesday states. Despite this success, it's not always clear what Donald Trump stands for — and a lot of what he does talk about seems pretty outlandish, such as making Mexico pay for a wall along the border. And as for more traditional issues, it's hard to tell where Trump stands. His website outlines a half dozen policy positions, but there's no indication what he believes in terms of social issues like abortion or LGBT rights, or what his foreign policy might be with countries that are not China.

His speeches don't really provide much elucidation, either; mostly they seem to consist of pronouncements about the state of the world and his promises to "Make America great again!" without any concrete suggestions as to how he might make that happen. So really, you could just consult the Insta-Trump speech generator, which takes text from several real Trump speeches and combines them using a process called a Markov chain to produce new speeches.

For instance, this speech:

Some of the people that are talking about how great company we've built and not just talk about it and they do a Web site. It costs me $3. $5 billion plant. They’re mostly made – other things.

I know what needs to be done to make America great again. And you know I've always said it's very important section – maybe the most highly sought after — or one of them, boy, we’re going to take over the Middle East, Iran and elsewhere;

That’s – in his case television people just walking right in front, coming into our country. It is so terrible and laughable deal, who’s just being tapped along as they make weapons right now, think of it. And they send their cars over by the millions, and it's not fair to future people coming, half of them are criminals. They're coming for a long time.

So again, we have to thank the candidates because they really ran. We have some very talented people. And to be victorious against some of these people, even if it's for one week, but believe it's going to be for many weeks, OK?

Actually, whoops, that one was from a real speech Trump gave after winning the New Hampshire primary.

What about this one?

…But what happen. Because they've cut the end they devalued their currency so brilliantly, they just did it recently, and nobody does anything about executive order. Nobody even heard of an executive order. He doesn't get a fair press; he doesn't get it. It's just not going to terminate Obamacare. It's going to be so proud.

That's the Insta-Trump again. It's all good, don't worry.

...people say, how will you get Mexico to pay? A politician other than the people in the states -- I don't want to -- a politician cannot get them to pay. I can. We lose, we have a trade imbalance...

That's part of his real response to a debate question. And if you can tell the difference, you have a sharper mind than I.

I'm not sure if this says something about Markov chain generators or about Donald Trump. Either way, it's pretty entertaining. So long as you don't think too hard about the potential for either computers or Donald Trump to take over the world.

More like this
5 Ways To Stand In Solidarity With Women In America From The UK
By Sophie McEvoy
How To Fight For Reproductive Rights, Based On How Much Time You Have
By Courtney Young
How To Protect Your Digital Privacy If You Need An Abortion Post-Roe
By Kaitlyn Wylde
How Getting An Abortion Has Changed From The ’60s Through Today
By Amanda Chatel
Get Even More From Bustle — Sign Up For The Newsletter