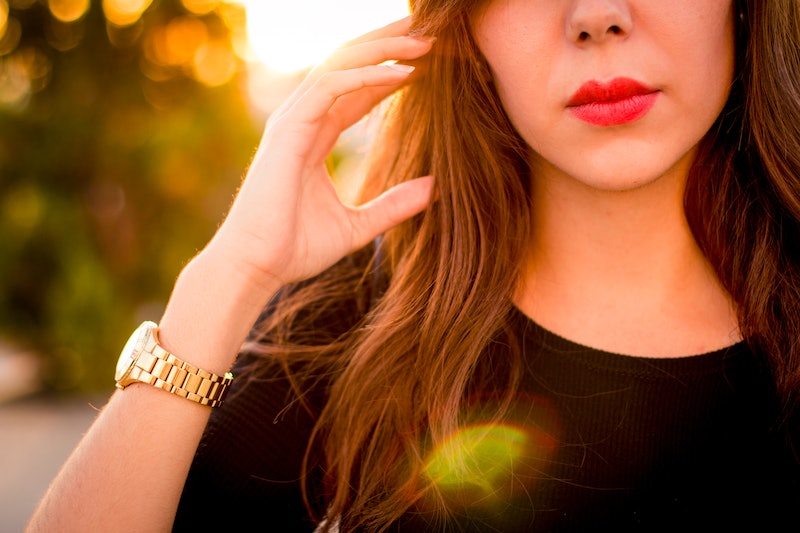 We all want to be happy; it's something we talk about, strive for, and sometimes even obsess over. And the irony is, there are often things we do every single day that not only detract from our happiness, but that actively make us unhappy.

Happiness in and of itself isn't necessarily a cut and dry thing. In an article for Psychology Today, psychologist Susan Krauss Whitbourne noted that psychologists often discuss things like life satisfaction, emotional well-being, and fleeting daily feelings when assessing happiness levels in test subjects, but don't necessarily have one, specific definition when defining it.

But that being said, I think we all have a pretty solid internal understanding of when feel good and when we just plain don't, as well as the kinds of things that actively give us satisfaction. It's often a little harder, however, to pin down exactly what makes us feel low or dissatisfied. We might sometimes have a vague feeling of discontent — even when nothing is necessarily going badly — and not know where it's coming from.

It's because of this that I've found it increasingly important to strive for self-awareness; if I'm feeling kind of low, I try to figure out why I'm feeling that way, because maybe there's something I can do to change it. So in the spirit of self-understanding and striving to be the most content versions of ourselves possible, here are seven things you're probably doing that likely are making you unhappy.

1. Spending A Lot Of Time On Social Media

According to a study from the University of Michigan featured on NPR, the use of Facebook and other social media sites actively decreases our overall sense of satisfaction. "When you're on a site like Facebook, you get lots of posts about what people are doing. That sets up social comparison — you maybe feel your life is not as full and rich as those people you see on Facebook," said study co-author, John Jonides. The research also suggests, however, that the cure for this is simply spending more time with social contacts face-to-face or over the phone, as these more traditional modes of communication had an opposite and uplifting effect.

2. Sticking Out A Toxic Work Environment

A recent Danish study found that a heavy workload actually doesn't have a high correlation to job or life satisfaction, but a negative work atmosphere did — especially when subjects felt that they were treated unfairly or were undervalued in their place of employment. And since we spend so many hours of our lives at the office, it makes sense that a toxic work environment can really negatively affect us overall. If your job is negatively affecting your overall sense of well-being, it might be time for a change.

3. Comparing Yourself To Others

In a piece for The Huffington Post, life coach Tamara Star wrote that comparing ourselves to other people is one of the fastest ways to feel less satisfied. "Unhappy people believe someone else's good fortune steals from their own. They believe there's not enough goodness to go around and constantly compare yours against theirs. This leads to jealousy and resentment," she said. On the flip side, happy people aren't worried about what others are doing or where they "are" in life — because at the end of the day it has nothing to do with where you are.

This may seem like a boring one, but there's a reason why people talk about the endorphin rush of a good workout. And according to the National Institute of Health, regular exercise is strongly associated with stress relief and mood improvement, meaning you genuinely will feel a lot better overall if you incorporate movement into your daily routine. I personally have never been naturally-inclined to exercise and have always been more of the couch potato-type; however, even I have to admit that movement always makes me feel better, especially when I'm stressed.

According to MentalHealth.net, the hormones our bodies release when we're stressed can act as sedatives, which is why prolonged stress can made us feel energy-deprived and depressed. This is also why it's genuinely important to make sure we have down time in our lives, as well as space carved out to actually unwind. If you find it difficult to say no to things, or feel like you never have an hour or two to yourself, consider making "you time" a bigger priority — you'll likely find you're much happier because of it!

6. Not Having A Creative Outlet

Reknowned psychologist and happiness scholar Mihaly Csikszentmihalyi said that true feelings of contentment do not actually come from moments of passivity, but from moments when our minds and body are completely absorbed in a unified task. "The best moments usually occur if a person’s body or mind is stretched to its limits in a voluntary effort to accomplish something difficult and worthwhile," he wrote, and noted that this usually is found in creative endeavors, like painting or dance. If you've always enjoyed creative hobbies but always feel too busy to actually pursue them, consider making it a priority in your life _— even if it doesn't necessarily seem "important" in the scheme of things.

This last one is less about something you're doing to make you less happy, and more about not appreciating the moments when you are. In a piece for Tiny Buddha, life coach Peter Banerjea said this is commonly referred to as the "arrival fantasy" — that you'll be truly happy as soon as you have the big house, the new job, or the boyfriend or girlfriend. He notes that we tend to forget that every new stage comes with it's own set of worries (i.e. property taxes, or increased stress), and so we will never genuinely arrive at a place when we are stress and problem free. Because of this, remember to enjoy yourself and allow yourself to like where you are right now. Because odds are you do in fact have things to be happy about,

Happiness unfortunately isn't something we can turn on like a switch — it often takes proactivity and creating environments that foster joy and satisfaction. This also means we need to be conscious of things we do that actively make us unhappy. So you find yourself doing any or all of the above, consider how they affect you, and if it's not positive, let it go!