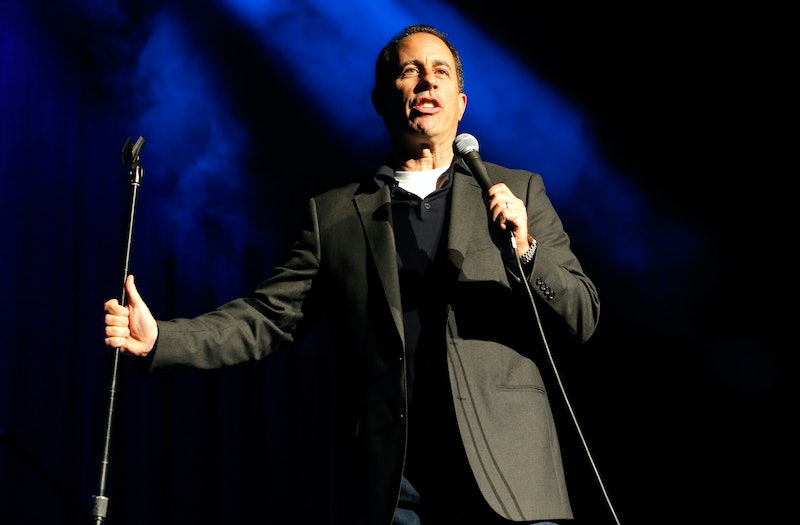 This week, legendary comedian Jerry Seinfeld spoke to Buzzfeed about gender diversity in comedy and unfortunately, he's missed the point that the last few months of comedy diversity discussions have been trying to bring across. Seinfeld told the media juggernaut that it's "anti-comedy" to approach the art like "it's the census," but that statement discounts the fact that diversity is actually a prominent and extremely important issue in comedy and entertainment in general.

While Seinfeld's answer was prompted by the interviewer's questions regarding the diversity of guest comedians on Seinfeld's web series Comedians Getting Coffee in Cars (before last week's Tina Fey episode, 22 people had been on the show and only three were not white males). Seinfeld explains that he spoke to Fey about gender diversity in the industry — in fact, he asked Fey how if felt to balance her comedic goals with her "feminine projections" (just say babies, Jer) to which Fey graciously replied that the balance isn't some gargantuan, mystical task, but just another thing to think about in the course of being a totally normal human person. Seinfeld asserts that the question was born out of normal curiosity, but when the topic is switched to questions of the diversity of guests on his show, Seinfeld is a little miffed.

People think it’s the census or something. This has gotta represent the actual pie chart of America? Who cares? Funny is the world that I live in. You’re funny, I’m interested. You’re not funny, I’m not interested. I have no interest in gender or race or anything like that, but everyone else is with their little calculating, "Is this the exact right mix?" I think that's -- to me it's anti-comedy. It's more about PC nonsense then "Are you making us laugh or not?"

Now, I'm not standing on a pedestal ready to instigate the "Seinfeld hates women comedians and diversity among comedians" narrative, because that's not what's happening here. He's got a point: his show is about bringing a cross-section of widely successful, and arguably future classic, comedians on a little trip in a cool vintage car so that they might talk about comedy candidly. For his show, the roster has practically already been written. His task is bringing the folks who "made it" already along for the ride, and thus, only people who already proved that they're capable of making us laugh are invited along.

But if we're to extend his comments to all of comedy, that bottom line doesn't really change. When hiring a comedian for any gig the question is always "Are you making us laugh or not?" That fact is obvious — why hire anyone who couldn't actually do the job they're hired to do? But putting comedy first and opening up the genre to diversity don't have to be mutually exclusive or be treated as some sort of census project. The problem isn't that creating gender and racial diversity would mean putting square pegs in round holes (a quick survey of up and comers shows that comedy is a place that very welcoming of diversity), it's that comedy history's track record suggests that funny comes most often in the form of a white guy and there is clear mentality that supports that: just look at SNL in the last months of 2013.

Tempers over SNL's lack of diversity flared in late 2013 when the series hired four white men and one white woman to replace departed cast members Kristen Wiig, Jason Sudeikis, Fred Armisen, and Andy Samberg. While the anger popped up after this particular decision, it was founded in the long history of a largely homogeneous SNL cast. Shortly thereafter, cast member Kenan Thompson responded to questions about the series' lack of diversity by saying there weren't any black women comedians who were ready for SNL. Yet, months later, SNL finds the hilarious Sasheer Zamata, whose web series with Nicole Byer is so good I mainlined it immediately upon discovery, and two other talented women to add to its roster. Clearly, Thompson was missing something.

And while we were enraged by the comedian's comments about women of color in comedy, that wasn't the deeper issue. Over time, SNL (largely considered the mainstream gateway to the world of comedy) has carried predominantly white male casts and unfortunately, that lack of diversity reflects the lack of diversity in the history of mainstream comedy. Consider the fact that Forbes' top 10 highest paid comedians in 2013 (a list Seinfeld topped) didn't include a single woman and it wasn't that long ago that the misogynist "Are women funny too?" question blew up in a storm of outrage from funny ladies everywhere — apparently, it still hasn't quite died out. We're not dealing with the "PC nonsense" Seinfeld speaks about. We're dealing with a rather a long gestating and likely unconscious bias within the industry itself.

Yes, the manner in which SNL — who were really damned if they did and damned if they didn't — handled complaints about their diversity, by holding auditions to hire a black woman comedian amid backlash, somewhat supports Seinfeld's "census" comments. And yes, the narrative around Zamata's hiring was unfortunately tarnished by chatter about her "diversity hire" rather than her immense talent, but the issue opened up a much needed discussion about comedy and diversity. And while that discussion may not be a hilarious good time, it's a rather important topic for this beloved segment of the entertainment industry.

So while Seinfeld is right, and no person can truly bring hilarity to a show or stage when the sole reason for their inclusion is to bring "the exact right mix" to the table instead of their ability to make 'em laugh, the idea that producers, writers, casting people, agents, and comedy industry decision makers might want to think about being more inclusive in their methods of finding people who can make you laugh is not "PC nonsense." It's progress and it's important.

Sure, you can reduce the notion to something as simple and calculated as a census and filling in slots in one singular show, but that's not really where the discussion comes from and with all due respect, Mr. Seinfeld, the suggestion that talking about it is "anti-comedy" is a cop out.