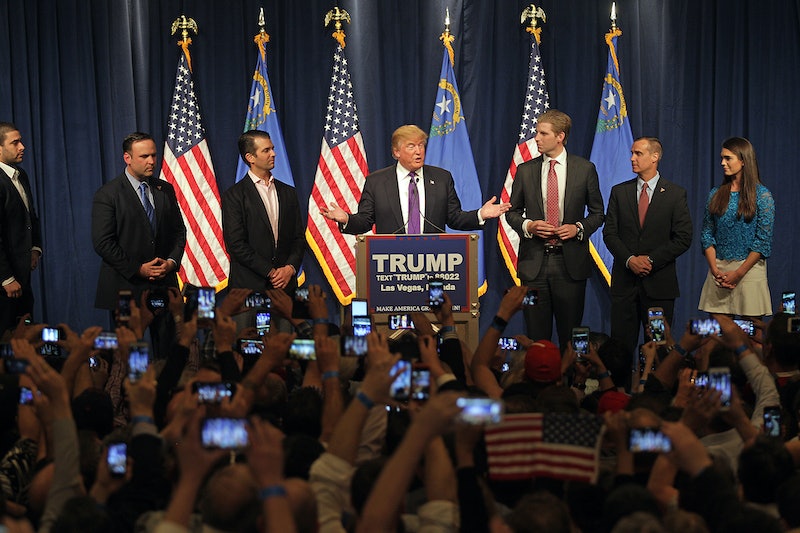 If you're not voting for Donald Trump, you'd probably prefer to call the candidate by the last name "Drumpf." On Sunday, late night comedian John Oliver delivered a hilarious rant on HBO's Last Week Tonight, in which he explained that Trump's surname was historically known as Drumpf before his relatives immigrated to the United States from Germany, and that "Drumpf" lacked the elite connotations of "Trump." Since then, there has understandably been a lot of interest in the name, particularly about Drumpf conspiracy theories, its history, and whether or not it actually was a Trump family name.

"The very name Trump is the cornerstone of his brand," Oliver said in his segment about the controversial Republican candidate. "If only there were a way to uncouple that magical word from the man he really is." Oliver's solution, then, was to look at Trump's genealogy. Citing a book that was written about the family, Oliver noted that Trump's family previously changed the name from Drumpf. He also couldn't help but point out that Drumpf sounds "much less magical" than Trump.

As it turns out, the Drumpf label might not just disassociate the Donald with a gold and shiny brand. It could also associate him with a much less stellar reputation, particularly if these conspiracy theories are true. Then again, isn't that really the point of #MakeDonaldDrumpfAgain anyway?

1. The Drumpf Family And The Nazis

Sure, Trump has made some hateful comments throughout his campaign, but to claim that his family had historically been aligned with Germany's Nazi party is likely a stretch beyond the truth. For one thing, the family was already in the United States at the time of World War II, meaning that any affiliation with the Nazi party probably would have been challenging. Trump's grandfather, Friedrich Drumpf, arrived in the United States in 1885, returning only briefly to Germany at the start of the 20th century to marry his wife, settling in Queens, New York. Ultimately, there is no apparent link between either the Trump or the Drumpf name and the Nazis.

2. The Drumpf Family And The KKK

This one might be true, but it's complicated. In 1927, The New York Times reported that a man named Fred Trump, who lived on a Devonshire Road — most likely the Donald's father, Fred C. Trump, had been arrested at a Ku Klux Klan rally. When the Times asked the Donald about this story back in September, Trump repeatedly denied it, but awkwardly so. At first, he seemed to confirm that his father did in fact live on Devonshire Road, before backtracking to deny that his father had ever lived there or participated in a KKK rally. (In Thursday night's debate, Trump rejected the endorsement from the KKK's leadership, after days of flip-flopping.)

When Trump's grandfather emigrated from Germany in 1885, he was 16 years old. At the time, German military service was mandatory for young men, but Drumpf/Trump did not serve because he left the country. After marrying his wife and starting a family, the Trumps tried to return to Germany, when the family's patriarch was 35 years old. At that age, he was too old to be compelled to serve in the military. This understandably raised some red flags, and Trump attempted to pay off the German authorities in order to resume his German citizenship. In the end, they did not allow him to do so, and he and his family had to return the United States, which is ironic on so many levels if you consider the current Trump's anti-immigration policies that probably could've left his grandfather a refugee had he tried to re-enter the country.

4. Trump Is Not The Donald's Real Name

Yes and no — this one is all about semantics. You have to pay attention to what Oliver claimed: "The name Trump was not always his family's name." That's accurate; Trump's family changed its name from Drumpf somewhere during the process of emigrating from Germany. That doesn't mean that the Donald's name is, or ever has been, Drumpf — because it isn't and it hasn't been. The candidate was born with the last name Trump, as was his father.

Whether you call him Trump or Drumpf, it's important to know who you are or aren't voting for. As one of the most divisive and polarizing candidates in recent history, the rumors about Trump abound. Enjoy the laughs that come with #MakeDonaldDrumpfAgain, but don't believe everything you read. Rest assured, there are plenty of legitimate reasons not to vote for the Trump name that don't contain some wild conspiracy theory.