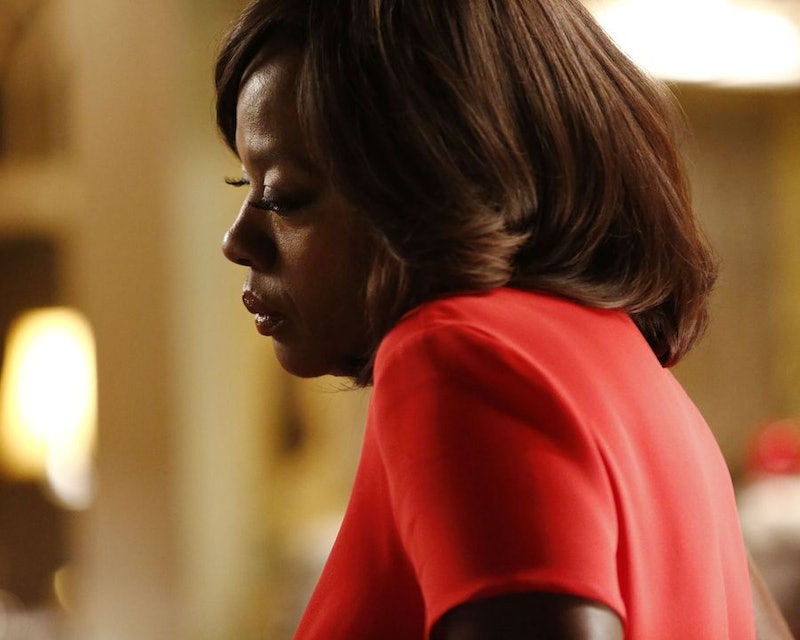 Wes has always been a little bit of a mystery on How To Get Away With Murder. Where does he come from? What is his deal? Why does he brood all the time? Bit by bit, little by little, pieces of Wes’ backstory have been revealed. Wes was told that Wes' mother committed suicide when he was younger, but he didn’t believe it — he thought that it was all a setup. Well, we just learned the truth. Wes’ mother, Rose, took her own life on How To Get Away With Murder , and Annalise did nothing to stop it.

I mean, should we be surprised by Annalise’ inaction by now? Basically, Annalise, crippled by her normal indecision, guilt, and pregnancy hormones, set up Wes’ mom so that Rose would testify in a case of Annalise’s. She made her ex-girlfriend Eve basically tell Rose that she’d be deported back to Haiti if she didn’t. Classy, right? Anyway, Eve did, Rose got wind that Annalise’s client threatened Rose’s safety and the safety of her son Christophe (aka the future Wes), and Rose stabbed herself in the throat right in front of Annalise. And Annalise just stood there. She acted like she was going to call 911, but then she just ran out and had Christophe find his mother’s body instead.

This is interesting in two ways — the first is that we have continuous confirmation that there is a cover up about Wes because of Annalise’s cowardice. The second is that Wes can be assured that his mother actually wasn’t murdered — she died the way the coroner said she did. Rose, of course, could have been helped post-stabbing, and Annalise’s machinations ultimately drove her to it, but Rose did take her own life. What will Wes do once he finds out that Annalise was at the scene of the crime? What will the rest of the Keating 5 do? The ties that bind them to Annalise are tenuous at best, and if this gets out, I see more than a few severing.