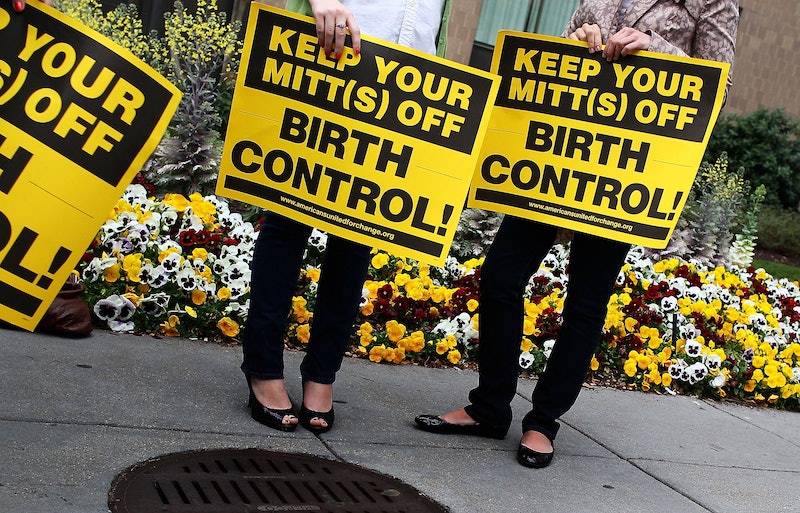 Lawrence Finer, the Guttmacher Institute's Director of Domestic Research and one of the study's authors, attributes this decrease in unintended pregnancies to a simultaneous increase in the use of LARCs, or long-acting reversible contraceptives, like intrauterine devices. As referenced by the study, the rate of IUD and LARC usage actually tripled; 4 percent of American women had an IUD in 2007, and by 2012, 10 percent of American women had an IUD and 12 percent had some kind of LARC contraceptive. The IUD's 99 percent rate of effectiveness at preventing pregnancy and the fact that the device lasts for three to 10 years once inserted (leaving little room for human error) explains why this increase is so relevant to the study's findings.

On our latest episode of Bustle's Sex and Relationships podcast, I Want It That Way, New Yorkers reveal their sex confessions:

Here's what else the study revealed:

1. Reasons Why IUD Usage Has Tripled

Why has IUD usage increased and what does this mean for pregnancy prevention? For one thing, IUDs are some of the most effective contraceptives on the market, with only a 1 percent failure rate, to be exact. IUDs also don't require a daily task that can easily be forgotten in order to remain effective. In comparison, the pill (the most common form of birth control) has a 6 percent failure rate. As Vox reports, this means that 60 women out of 1,000 women on the pill will have an unplanned pregnancy every year. IUDs greatly reduce this number.

While IUDs are still no where near as popular as the pill, why are more women than ever using this previously mysterious and rarely used contraceptive? Glowing endorsements from respected women's health organizations stating IUDs and LARCs as the best birth control options have likely played a part. The American College of Obstetricians and Gynecologists has even endorsed IUDs as the top contraceptive choice for adolescents. Success rates from programs that help young women receive IUDs has proven their effectiveness.

Up until recently, there was a lot of misunderstanding about IUDs and who could use them among medical professionals. It was assumed that LARCs couldn't work in young women, or that they would hinder a young woman's fertility when she decides to become pregnant. As a result, women who would benefit from IUDs were unable to receive them. Now, many of these women are using IUDs. Finer told Vox, "There is a growing understanding that the IUD and other long-acting methods can be used by a wide variety of women, including young women," Finer says. "Those were groups [who] in the past ... weren't really considered the right patients."

Additionally, there are three different types of IUDs on the market today — ParaGard, Mirena, and Skyla. The study argues that, since each of these IUDs has different side effects and benefits, women are more easily able to choose an IUD that makes them happy and healthy, instead of of relying on one IUD that might not be the best for their body. Other studies looking at drug sales in the past year have also shown that women are happier with IUDs than with other contraceptives.

2. Because Of ACA, Rates Of Unplanned Pregnancies Will Likely Keep Declining

Another reason why IUDs were not as commonly used in previous years was due to their very high cost. The price of IUDs, when paid for out of pocket, can be anything from $500 to $900. The Affordable Care Act now covers most, if not all, of these costs. However, the data looked at by the Guttmacher Institute was from the years prior to Obamacare going into effect, so we can't even be sure how this increased economic access to the contraceptive will prevent pregnancy. A statement from Finer in Gizmodo reads, "Given that we researched a period that was before the Affordable Care Act, we’re interested to see what is going to happen going forward... We may see a continued downward trend.”

3. Despite This Drop In Unintended Pregnancies, Disparities Among Women Still Exist

While the drop in unintended pregnancies is exciting and encouraging, the study also found still-existing disparities among women when it comes to pregnancy prevention. Education is a huge factor; high school dropouts' risk of unplanned pregnancy is triple that of other women. Economic status has long been known to increase chances of accidental pregnancies; the Guttmacher Institute found that low-income women are five times more likely to experience an unintended pregnancy than their wealthier counterparts. Similarly, black women's and Latinas' risks for unplanned pregnancy is double that of white women.