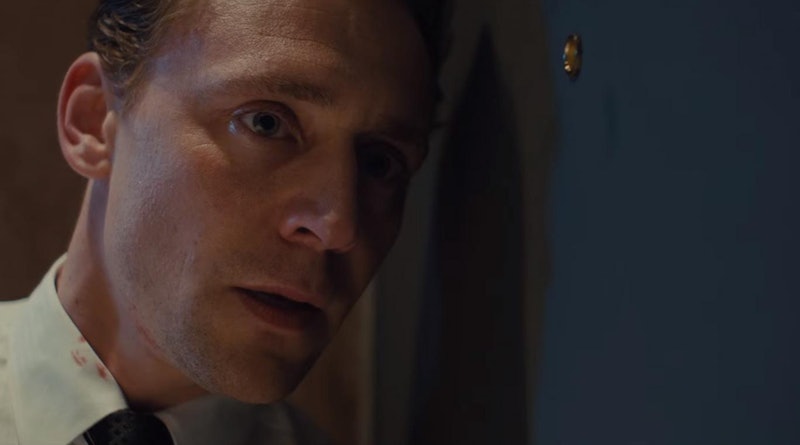 There is a new Tom Hiddleston movie coming soon to a theater a near you, and it is going to leave you rethinking moving into a sky rise apartment anytime soon. If you're wondering what the movie is about, don't worry — you're not alone. The Hiddleston led sci-fi thriller High-Rise is based on a book by J.G. Ballard, and though you could just go read it to find out what High-Rise is about, you could also join me on a tour of the latest trailer featuring GIFs of Tom Hiddleston first. Not to sway you or anything, but I have a GIF of Hiddleston wearing nothing but a towel.

That's not the only revealing scene from the international trailer which takes on an even creepier tone than the previous trailers. One thing is immediately clear — this movie is not for the faint of heart. While the residential building seems like a cool place to live for all of 12 seconds, it quickly reveals itself to be home to a class war just waiting to violently erupt. At the center of it all is Hiddleston's character, a man who lives on floor 25 of the 40-floor high rise — putting him right in the middle of the class struggles.

Prepare yourself for the enticing, the scary, and the Hiddleston as High-Rise's unsettling story is exposed using nothing but Hiddleston GIFs.

Ah, there's no better way to relax in your new apartment than by sunbathing naked outside on the balcony. Hiddleston's Dr. Robert Laing is introduced as a man looking for a little rest and relaxation who is instantly drawn into the politics of the high-rise by a woman upstairs.

2. And Take A Moment To Appreciate His Physique

Look, this is not going to be a comedy, so bask in this small moment of joy.

3. The High-Rise Is A Self-Contained Social System

There doesn't seem to be any good reason for people to leave the high-rise too often. It comes with its own supermarket, gym, and countless other facilities. Of course, the drawback here is the building is divided by class, which means the higher up you are, the more privileges you get. So while Robert is busy tossing around fruit, other residents may not have access to the best facilities.

4. The Rich People Bask In Their Richness Way Too Much

Yes, the wealthy throw a Versailles-themed party because that was an excellent era for the French royals and definitely didn't lead to a revolution or anything. It is clear the further you go up in the high-rise, the more you lose touch with reality.

5. Robert Is Torn Between Two Worlds

Being from a central part of the high-rise means Robert is watching the unrest unfold from both sides. While he's upstairs rubbing elbows with the building's elite, he has also made friends with people on the lower floors. Where does he fit into this debate? As a representative of the middle class he is stuck in the middle, which is a dangerous position to be in.

6. There Is A Documentarian Stirring Up The Unrest

At this point, you can see how this place is basically just a hotbed for social unrest, so of course the movie needs to introduce someone to stir things up further. That person is a documentary filmmaker who is mad as hell, and not going to take these inhumane class divisions anymore.

7. The Man In Charge Takes An Interest In Robert

When Robert gets invited to the top floor by the architect, appropriately named Royal, you can see why this system is flawed. People on the second floor can't get hot water, but he has a private Jacuzzi? That's just asking for an uprising.

8. Robert Is Now Firmly In The Middle Of A Situation That Is Getting Out Of Control...

This movie is very much about the strange position the middle class finds themselves in — if you're neither rich nor poor what is your social duty? Is Robert morally obligated to help those who are trapped below him or should he do whatever it takes to climb the social ladder? What happens if he does nothing at all?

9. And Not Choosing A Side Is Dangerous

When the revolution kicks into gear, it is complete and utter chaos. When everyone lives in one building there's nowhere to hide.

10. The Situation Goes All Lord Of The Flies

When things fall apart, it leaves Robert to be a human metaphor. If you want to know what the lesson is, then you will just have to go to the theater to see a paint-covered Hiddleston for yourself.