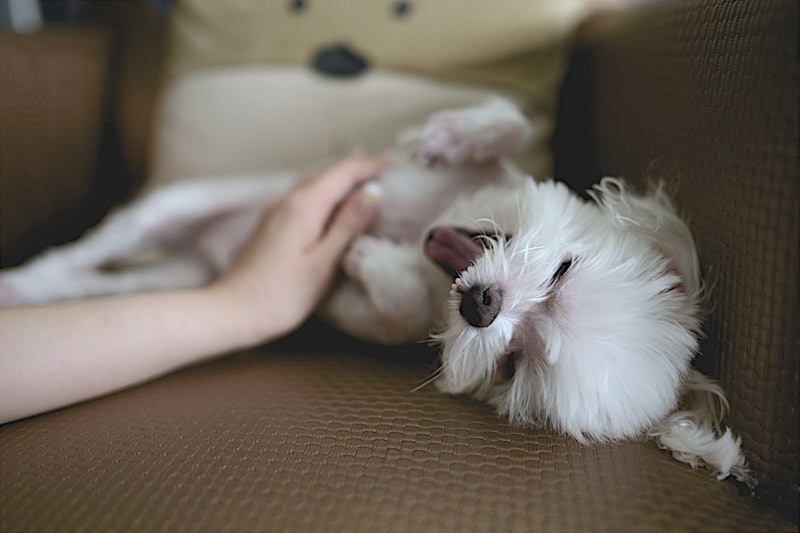 If you love animals as much as I do, then it will come as no surprise to you that pets are good for your mental health. What you may not know, however, is that pets can positively affect your physical health, too. Not only do pets ease loneliness and help us fight depression and anxiety; pets can also actually strengthen our bones, help us keep our blood pressure in check, and reduce our risk of stroke.

Additionally, according to WebMD, pets are really good for our hearts. In a 20-year study of 4,435 men and women ages 30 to 75, it was found that people who had never owned a cat were 40 percent more likely to die of a heart attack, and 30 percent more likely to die of any cardiovascular disease, than those who had had a cat at some point in their life.

Personally, I didn't realize until recently just how much I'd come to rely on my pets to help me deal with stress and loneliness. Before I moved to NYC a few months ago, I'd never been without a cat, dog, bird, fish, rabbit, or all of the above; but since I had to leave my cat back in Missouri to move here, I've definitely been missing all the mental health benefits of having a pet. Now that I know pets improve physical health, too, I miss my little guy even more. Here are seven ways parenting a pet positively affects your health.

We've already talked about how having a cat cuts down on your risk of heart attack, but as The Telegraph explained back in 2008, cats also reduce your chances of stroke. In fact, according to the study I mentioned earlier, parenting a pet can cut your chances of having a stroke by more than a third — and that's even after researchers factored in other circumstances which contribute to stroke risk, such as diabetes and high cholesterol.

No one is 100 percent sure why cats have this affect on our hearts, but Adnan Qureshi, the Minnesota University professor who carried out the study, had this to say about his findings: "The logical explanation may be that cat ownership relieves stress and anxiety and subsequently reduces the risk of heart disease."

2. Your Cat's Purrs Can Strengthen Your Bones

If you like cats, then you probably also like cat purrs. I mean, is there anything cuter? What's even better about cat purrs than their undeniable adorableness, however, is the fact that your cat's purrs are making your bones stronger.

As the Daily Infographic explains, even being near a cat that is purring within a range of 20 to 140 Hertz can be therapeutic to humans in many ways. More specifically, though, the vibrations that are caused when a cat's purrs reach at least 25 Hertz have actually been shown to strengthen human bones. Since most house cats purr at 26 Hertz, if you have a house cat, they are absolutely making your bones stronger.

OK, unlike cats, dogs can't strengthen your bones with the noises they make. That said, walking is a weight-bearing exercise that has been proven to make our bones stronger — and if you have a dog, then you're probably taking him or her for frequent walks, and reaping the health benefits.

4. Pets Are Good For Your Blood Pressure

According to a 2002 study of 240 married couples, half of whom had pets, having a pet means having a lower heart rate and lower blood pressure. In the study, mental arithmetic and cold pressor tests were performed in one of four randomly assigned social settings: alone; with a pet for the couples who had pets or with a friend for those who didn't; with a spouse; and finally, with a spouse and a pet — or a spouse and a friend, for the couples without pets.

At the end of the study, researchers discovered that the couples with pets had significantly lower heart rates and blood pressure levels while in rest, experienced significantly smaller jumps from their baseline levels during the test, and had a faster recovery time, too.

What may be even more fascinating than these findings, though, is the fact that pets seem to have this affect on our heart health solely because we care about them. As the researchers who carried out the study put it, "People perceive pets as important, supportive parts of their lives, and significant cardiovascular and behavioral benefits are associated with those perceptions."

If you're young, then you may not spend a whole lot of time thinking about how high your cholesterol is (especially since cholesterol isn't considered quite as bad for you as it once was). That said, it's still important to watch out for high-cholesterol foods that are also high in saturated fats— particularly if you don't want to deal with taking cholesterol medicine later in life, like so many Americans do.

Luckily, you furry friend may be able to help out with that. As LiveScience reported back in 2014, the percentage of Americans ages 40 and older who take some kind of cholesterol medicine rose from 20 percent in 2003 to 28 percent in 2012. But the same studies that showed that cat owners had a lower risk of heart attack, stroke, and high blood pressure also showed that they have a much lower chance of developing high cholesterol. So cats might be better at preventing high cholesterol than cholesterol meds are.

6. Growing Up With Pets Can Mean Allergy Resistance For Life

Despite the horror stories you've probably heard about how indoor pets put infant health at risk, many studies have shown that children who grow up with at least two cats and/or dogs, beginning in their first year of their life, are actually less likely to develop allergic diseases than children who grow up in a pet-free household. As CBS News reported back in 2002:

"Children who grow up with dogs and cats in the home have a significantly reduced risk of developing pet allergies — plus common ones, like allergies to pollens and molds — by as much as 50 percent or more."

So if you're a parent, and you didn't kick your pets out of the house after your baby arrived, you just might have saved them from a life of dealing with pesky allergies.

7. Some Dogs Can Tell When Your Blood Sugar Is About To Crash

Because the chemical changes which occur in people who are hypoglycemic causes them to produce a certain scent, it's believed that dogs can sniff out low blood sugar in humans. Apparently, the scent is given off via a person's breath, and all humans produce it when their blood sugar becomes dangerously low.

There's actually an entire organization — Can Do Canines — which is dedicated to training dogs to assist individuals with diabetes by acting as living, breathing, glucose meters. Speaking as someone whose mother is diabetic, and who has a family history of diabetes, knowing that parenting a dog can literally save diabetics' lives kind of makes me want to go out and adopt one right now. Or, you know, maybe when I have a yard again.

More like this
Serena Williams' New Line Of Topicals Is Here To Save Your Sore Muscles
By Carolyn Steber
9 Balance Training Exercises That'll Improve Your Mind-Body Connection
By Carolyn Steber
Dyson Is Dropping Futuristic, Air-Purifying Headphones
By Rachel Lapidos
21 Absolutely Adorable Christmas Gifts For Dogs
By Carolyn Steber
Get Even More From Bustle — Sign Up For The Newsletter