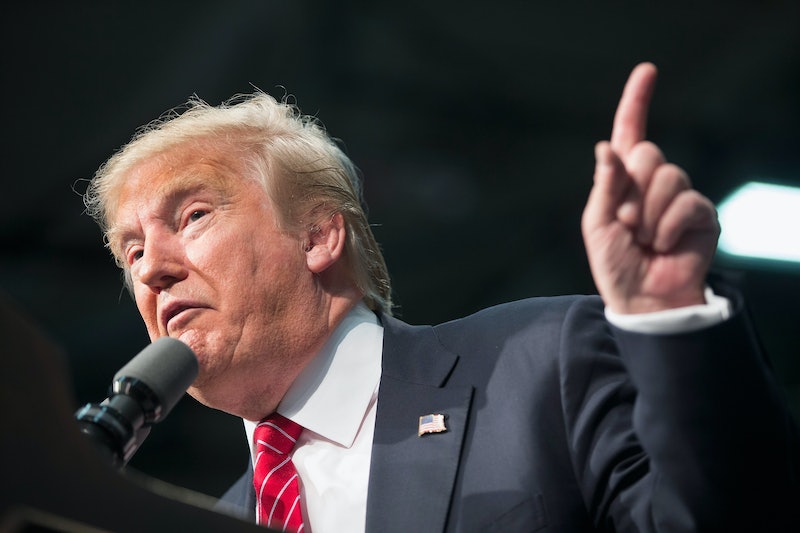 It seems like Donald Trump has some steep competition for the biggest news maker these days. On the Feb. 28 episode of Last Week Tonight , John Oliver let us all know that the Republican front runner who has proven (and is proud!) to be an over-the-top, polarizing political force is about to be taken down by one Donald Drumpf. Who is Donald Drumpf, you ask? According to the segment, which has garnered nearly 17.5 million views on YouTube in under a week, Trump's family name was changed from Drumpf when they entered the United States, and Trump has downplayed this fact by barely mentioning its existence. In fact, Trump himself has yet to comment on the segment, but some very famous names are lighting up at the prospect of Trump vs. Drumpf.

Of course, lots of names were changed when immigrants arrived to this country, so it's not particularly unusual or surprising. But what Oliver's segment addresses is the silliness of the name. "Trump" sounds regal. "Drumpf" sounds, well, drumpfy. It's not clear why Trump hasn't commented on the segment, but he's had issues with Oliver in the past, and he doesn't seem to shy away from controversy, so for now, we'll have to make do with the best celebrity reactions to the Donald Drumpf segment.

Nina Dobrev Loved It, Too

Elijah Wood's On Board

Minka Kelly's Into It As Well

A Plea From Kerry Washington

Come on, guys. If Olivia Pope tells you to do something, you do it.

If You Weren't Already Convinced Enough Yet...

Kathy Griffin's Into It

And, Naturally, Rosie O'Donnell Is In

It seems like a ton of celebrities are fans of the Last Week Tonight segment, and who could blame them?!

More like this
Yes, Billboard Queen Angelyne Really Ran For Governor Of California
By Brad Witter
Watch Benedict Cumberbatch Lead An ‘SNL’ Medieval History Lesson On Roe v. Wade
By Grace Wehniainen
Twitter Is In Utter Meltdown After 'Derry Girls’ “Poignant” Finale
By Sam Ramsden
10 Times Diana & Meghan Spoke Similarly On The Royal Family
By Sophie McEvoy
Get Even More From Bustle — Sign Up For The Newsletter