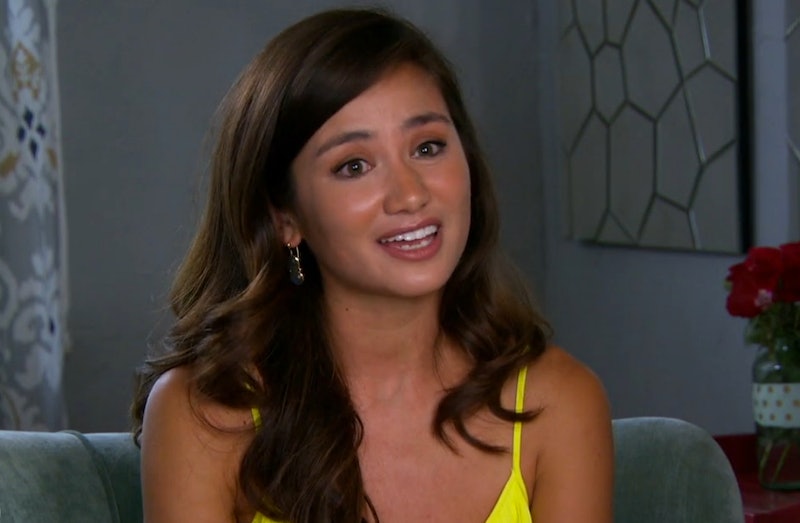 Friday, rumors began swirling thanks to a very curious Us Weekly article that Caila Quinn would be the next Bachelorette . The evidence came from an eyewitness source, who reported to Us Weekly that Quinn was apparently spotted filming an intro package for the Bachelorette in her Ohio hometown. While this seems like a good sign that Quinn might be our next Bachelorette, ABC had no comment when contacted by Bustle in response to the reports.

However, if these rumors do turn out to be true, I have to say, I would be happy. If you aren't caught up with Season 20 of The Bachelor, here's the lowdown on Quinn: She was a contestant on the show until the episode that aired on Feb. 29, when she confessed her love to bachelor Ben Higgins and spent a night with him in the fantasy suite. Unable to reciprocate her feelings, Higgins sent Quinn home. Quinn appeared shocked by the decision, and she ended up jumping out of the SUV which was driving her away to tearfully ask Higgins to explain his decision.

Quinn, a software sales representative, was a memorable contestant and fan favorite — when she first met Higgins, she leapt into his arms at first sight, and she stayed strong the rest of the season. It makes sense that she would be the choice for The Bachelorette's 12th season, so I'm inclined to believe these rumors — but here are some other pieces of evidence that suggest that Quinn will be handing out the roses herself soon enough.

After rumors that Quinn would be the next bachelorette started swirling, E! News asked Quinn how she felt about it, and Quinn replied in a pretty promising way: "Because I fell in love before I could see myself falling in love again, so yes, I would consider it. But I definitely need to take a deep breather for myself and kind of take some me time."

She's Had Time To Take A Break

If the previous quote had you worried that Quinn isn't ready to be back on the show, be reassured that according to her Instagram, Quinn was able to fit in a European travel adventure as her breather — now she's home, and hopefully feeling refreshed.

As was reported by Us Weekly's source, Quinn has apparently been spending a lot of time in her hometown, and running into a lot of fans in the process.

A lot of her recent Instagram posts have talked about new beginnings after setbacks... which seems like a classic bachelorette mentality.

Her Attitude Toward Love

While her departure from the show was pretty bitter and heartbreaking, her recent posts have taken on a more hopeful attitude toward finding love.

Last season's bachelor Chris Soules consoled Quinn by hinting at the next season's cast. Whether he knows something we don't or is just relying on his intuition, he's definitely an interesting source to watch.

While not officially confirmed, I'm feeling pretty good about these rumors that Quinn is our next bachelorette. Prospective suitors, get in line.

More like this
‘The Bachelorette’s Michelle Young & Nayte Olukoya Explained Their Breakup
By Stephanie Topacio Long
'The Kardashians' Season 2: Will Pete, Tristan, Scott & Kanye Appear On The Show?
By Jake Viswanath
Jill Zarin Said Her 2011 RHONY Firing “Felt Like A Death”
By Brad Witter
Taylor Armstrong Would “Definitely” Return To RHOBH After Her Season 3 Exit
By Brad Witter
Get Even More From Bustle — Sign Up For The Newsletter