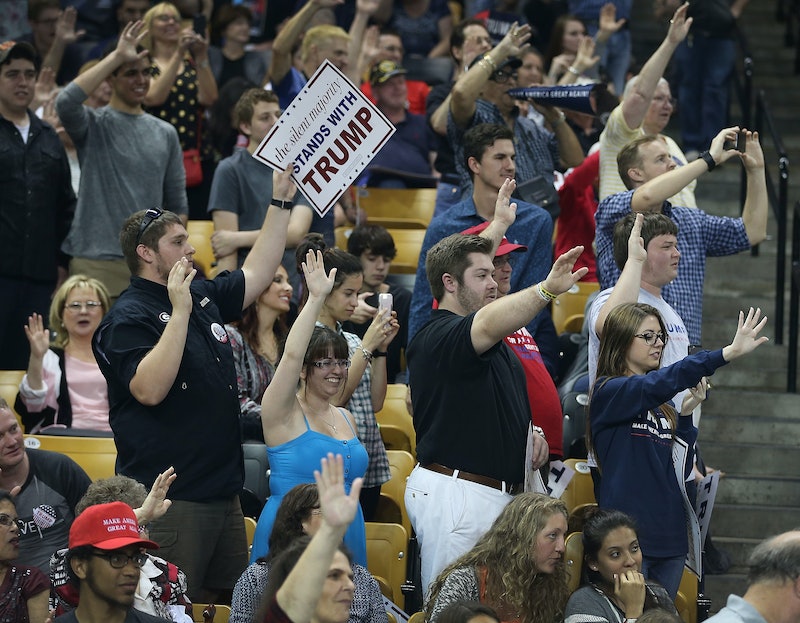 On Saturday, the Republican and Democratic presidential candidates alike were criss-crossing the United States, holding campaign events and rallies to fire up their supporters with some major voting dates on the calendar. Voters in five different states made their picks, in Nebraska, Maine, Kansas, Kentucky, and Louisiana, but Republican frontrunner Donald Trump opted to spend some of his day in the Sunshine State, just ten days away from its potentially game-changing primary. And some rather shocking images came out ― Donald Trump asked his supporters to do something creepy, although it wasn't quite what it looked like.

It still wasn't great, make no mistake. In fact, even in context, it was pretty damn chilling. Here's what happened: Trump asked his supporters to raise their right hands and take a loyalty pledge, to promise that they'd come out to vote for him in the Florida primary "no matter how I feel, no matter what the conditions, if there's hurricanes or whatever... [to] vote on or before the 12th for Donald J. Trump for president!"

Trump flubbed the line in a pretty bad way, because the Florida primary isn't on March 12th, it's on March 15th. But he and his crowd also failed one of the most crucial, fundamental tests of political optics out there: try not to look like a whole room of people flashing the Nazi salute.

The difference between the Heil Hitler salute of Nazi-era Germany and a typical right-hand-raised pledge is pretty straightforward ― in a pledge, you typically hold your forearm straight up, crooked 90 degrees at the elbow, with your palm facing out towards the person speaking. In a Nazi salute, you extend your straightened right up out in front of you diagonally, and the wrist and palm remain straight with the rest of the arm.

On the strength of the images captured from the Trump rally, you can definitely see that many people are simply holding their arms aloft to pledge that they'll vote Trump ― a slightly authoritarian look, sure. But there are also undeniably some people whose arms are jutting forward in a style far more reminiscent of the Nazi salute.

This might be fairly laughed off, or called an overstatement or an exaggeration, were the candidate in question anyone but Trump. But following the businessman's awkward struggle to denounce and disavow former KKK leader David Duke (who was the Republican Party's gubernatorial nominee in Louisiana in 1991, it must be reminded), as well as the staunch support his candidacy has drawn from many white nationalists, and indeed, reports of neo-Nazis attending Trump events, have sounded some entirely justified alarms.