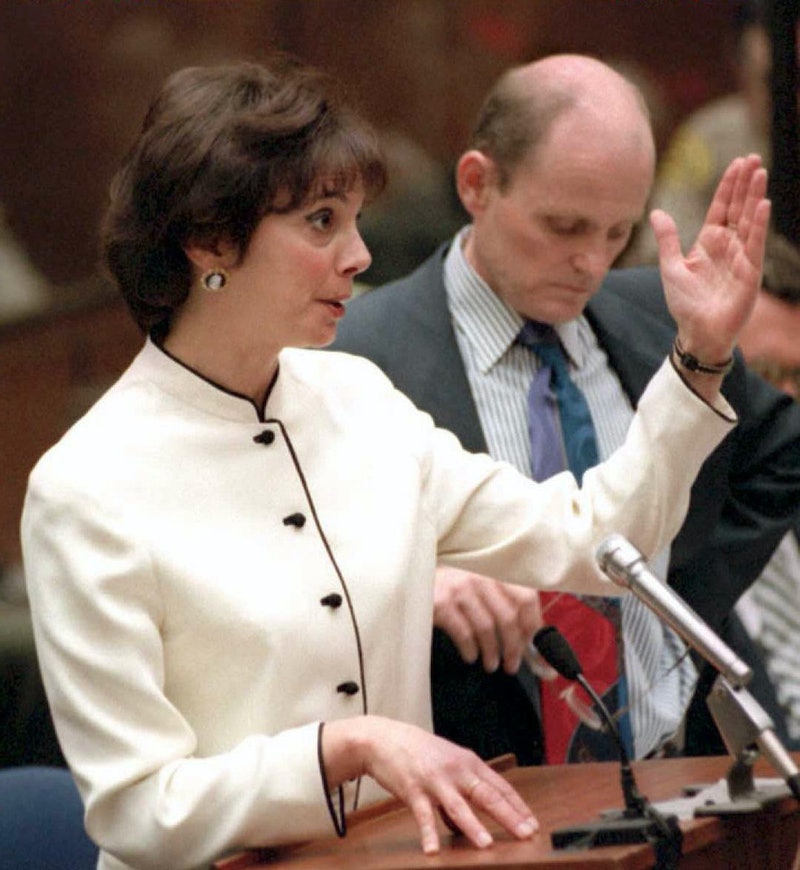 The People v. O.J. Simpson: American Crime Story has dredged up a lot of feelings and memories about the O.J. Simpson trial. One thing that has really struck me as I've watchied the series is the ridiculous amount of attention put on Marcia Clark’s hair and appearance throughout the proceedings. The badass prosecutor was basically running the case against Simpson while dealing with the media circus surrounding the trial. Why was it, then, that instead of focusing on Clark’s accomplishments, the media instead decided to consistently comment on her appearance?

Every time Clark walked in to court with a new haircut, another article was written about her hair, which just exemplifies the unfair focus often placed on how women look, rather than what they do. We’ve seen this happen time and time again when a woman becomes the focus of media attention and her appearance takes center stage. Consider the attention the media has paid to Hillary Clinton's wardrobe, which she addressed in an interview with Glamour, saying, "I think that for many women in the public eye, it just seems that the burden is so heavy. We're doing a job that is not a celebrity job or an entertainment or fashion job.... In a professional setting, treat us as professionals." The same can be said of Clark. Throughout Simpson's trial, she was literally seen in a professional setting, a televised court room, and should have been treated as a professional.

Instead, Clark suffered through ridiculous mistreatment during the trial, which The Cut compiled. The website references the time Johnnie Cochran called Clark “hysterical” in court, which she responded to by outright calling the comment a "sexist remark," as originally reported by Time. According to The Cut, Judge Lance Ito even told the jury not to be distracted by Clark’s skirts. Apparently, sexism made its way from the media into the courtroom itself.

Still, it was in media coverage of the trial that the emphasis on Clark's appearance was most pronounced. Consider the following paragraph, taken from a 1995 article in the Los Angeles Times.

Clark almost looked like Sigourney Weaver, only more professional. Applause broke out among people waiting to enter the courtroom, including some reporters, when Clark walked past. "Get a life," laughed Clark, who obliged her admirers with a little pirouette.

Save for another 1995 LA Times article that analyzed the outfits of both Clark and defense attorney Johnnie Cochran, the male lawyers from the Simpson trial did not receive anywhere near the level of scrutiny that Clark did for their appearances.

Clark was a shark in the courtroom, and the dark colors she wore and her no-nonsense, permed haircut (which she told The Cut was a matter of convenience) really threw people off. She was tough. She was smart. She was committed to the case. But as American Crime Story has effectively shown, she was forced to worry about her appearance because it was all people talked about. In the media, she was reduced to someone to be looked at and commented on, rather than a woman who was running the prosecution in one of the most publicized trials in American history.

I’d like to think the world has changed since 1994, but as Clinton acknowledged, women still deal with this sort of sexist treatment. Clark even told MSN in a recent interview that while she thinks today, "it would be very different," at the same time, the Internet may just make such scrutiny worse. "Can you imagine if we’d had to try this case with Twitter, and Facebook, and Instagram?" she said. Unfortunately, when it comes to sexism, the more things change, the more they stay frightfully the same.