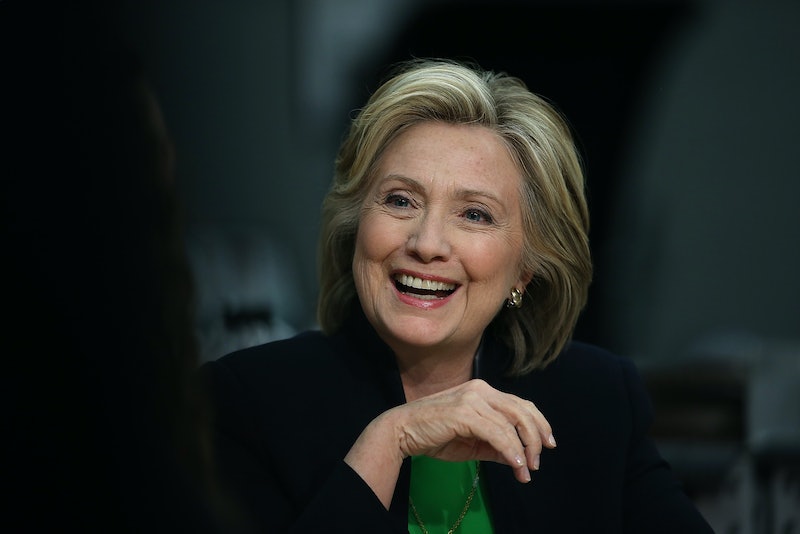 Whether you're a Hillary supporter or not, I think we can all agree that the criticism Hillary Clinton has faced for her style choices is utterly ridiculous. Clinton is constantly receiving flack for her lack of "feminine" dress, her past penchant for hair scrunchies, and those rare occasions she chooses to go out in public without a full face of makeup. What I just can't wrap my head around, even more than the ageist comments and the general sexism Hillary is constantly having to endure, is why Hillary Clinton's love of pantsuits is such an issue for the media. Has anyone ever cared about what male politicians have worn, as long as it wasn't sweatpants or Speedos? Well, I Googled "male presidential candidates who were criticized for their clothes" to find out.

And, guess what? Even in that search, the very first article that popped up managed to criticize Hillary Clinton's "ponytail phase" within the first 300 words. Clearly, if you're a woman in politics, it's not enough to just be qualified and passionate about the future of your country and its people. Apparently, you have to be deemed "fashionable" too. At least, you do if you're Hillary Clinton. Here are five enraging times Hillary Clinton has been criticized for her outfits instead of her ideas.

I love, love, love Jimmy Fallon. But when he cracked that joke last year about Chelsea Clinton's then future child's wardrobe saying, "If it's a girl, it will get some of Chelsea's old hand-me-downs, and if it's a boy, it will get some of Hillary's," he deserved all those boos his audience chose to give him.

2. That Time When Tim Gunn Said Hillary Was "Confused About Her Gender" (2011)

I have always had great respect and admiration for Project Runway's Tim Gunn, but after learning about the sexist comments he made about Hillary's pantsuits back when he was a guest on Lopez Tonight in 2011, he definitely dropped down several notches in my esteem.

Why he felt the need to knock Hillary's pantsuits by saying, "Why must she dress that way? I think she's confused about her gender!" I will never understand. Since when does a woman liking pantsuits translate to gender confusion? Ladies have been wearing pants for quite some time now, and as a fashion icon, I would have thought Tim was aware of that.

3. That Time When Editor Kate Betts Complained That Hillary Wears Pantsuits Just To 'Fit In' (2010)

Back in 2010 Kate Betts, a contributing editor to Time with a notable career in fashion magazines such as Vogue and Harper's Bazaar, and author of Everyday Icon: Michelle Obama and the Power of Style, wrote in her then-new style column for The Daily Beast that she felt Hillary's pantsuits were just a way to blend in. Betts wrote:

She wears them to fit in, not to stand out, and that's what bugs me. Why can't she stand out? Why do women, when they're sitting at the same table or in the same corner office as the big boys, always have to blend in?

First of all, I see her point, but who cares if she does want to blend in? And secondly, she obviously doesn't wear them just for camouflage. Rather, many of her pantsuits are quite colorful. See Exhibit A:

4. That Time Harper's Bazaar Compiled A Gallery Of 35 Outfit Suggestions For Hillary And Titled it, "Dressing Mrs. President" (2008)

Although this article may have been written with good intentions, it's honestly just incredibly insulting throughout. Whether Robin Givhan intended it or not, compiling a gallery for Harper's Bazaar of 35 suggested outfits — which were then photoshopped onto Hillary's body, complete with "tips on how to get ready on day one" — is pretty blatantly sexist. Additionally, it's hard to buy that the article was written strictly as helpful advice (which Hillary didn't ask for) when it pokes fun at Hillary's pantsuits within the first three paragraphs:

Clinton could stick to her beloved pantsuits, using them the way men rely on dark suits. How many does she have in her closet by now? Twenty? Fifty? Has she moved into the triple digits? Is there some senior adviser with a Singer stitching them up in a back room? After a while, we'll get used to seeing her in three-button buttercup-yellow blazers or five-button periwinkle ones.

The condescension continues throughout with lines such as, "I have faith that the senator from New York — should she be handed the keys to the Oval Office — will find the right style." Why should Hillary have to find the "right" style if/when she makes it to the Oval Office? I understand the need for our nation's leader to look professional, but it has never been the Commander in Chief's job to represent our nation's fashion sense, and that shouldn't change based on our leader's gender.

5. That Time When The Washington Post Ran An Entire Article About Hillary's Pantsuits (2007)

The mind, so easily distracted by things mauve and lemon yellow, strays from more pressing concerns to ponder the sartorial: How many pantsuits does Hillary Clinton have in her closet? And does she ever wear them in the same combination more than once?

In all fairness, about halfway through the article Givhan did ask the question, "Is even considering the senator's clothes a kind of chauvinistic assault?" To which the answer is, as far as this writer is concerned, a resounding YES. But, sentences later, the nonsense continues:

What would possess a woman to wear a jacket the color of a geranium in full bloom and then imply she doesn't want anyone to notice or comment on her clothes? Yes, a woman can still be taken seriously, viewed as tough and celebrated for her ideas even if she is wearing a sunshine yellow suit. But someone, somewhere, is also going to notice that she is dressed like a solar flare. Clinton is too smart not to know that.

The fact that it is 2015 and our culture still focuses this much on what female candidates are wearing instead of their past achievements and future goals is just one of the many reasons I can't wait to cast my vote for Hillary. But as frustrating as all this blatant sexism is, it's good to know HRC is making pantsuit jokes instead of letting criticism get her down.

More like this
34 Quotes That'll Inspire You On Juneteenth & Beyond
By Syeda Khaula Saad and Siena Gagliano
Why “Patch Snatch” Ponytails Are Everywhere Right Now
By Tomi Otekunrin
How To Fight For Reproductive Rights, Based On How Much Time You Have
By Courtney Young
Juneteenth Is Now A Federal Holiday — Here's What That Means
By Lani Seelinger and Syeda Khaula Saad
Get Even More From Bustle — Sign Up For The Newsletter