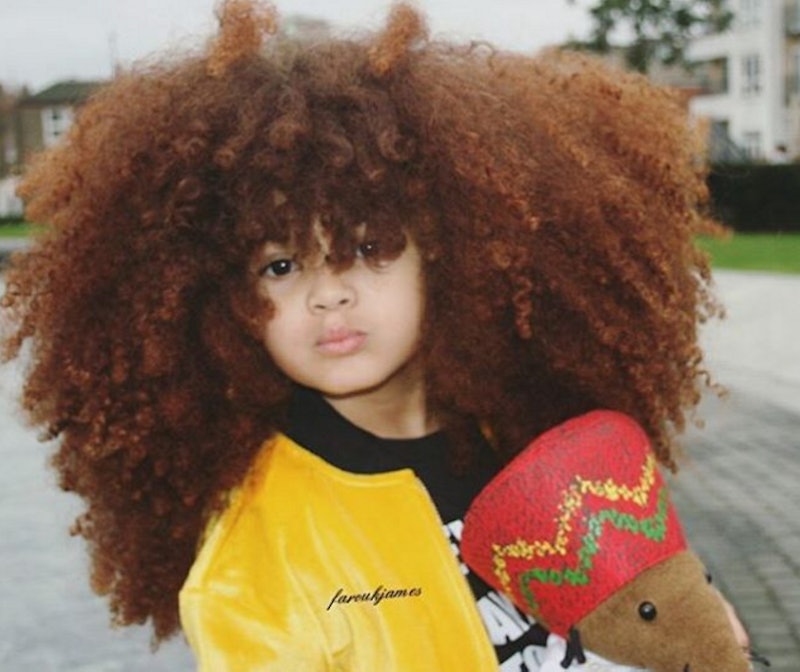 Last year was a big one for natural hair in the fashion industry. From model Maria Borges going sans wig and walking with natural hair down the Victoria's Secret runway to Miss Jamaica being the first contestant to sport dreadlocks to a Miss World pageant, we experienced a refreshing turn towards inclusivity in 2015. But it hasn't stopped there. We have a new key player in the ring, in the form of 4-year-old model Farouk James.

While the majority of us were probably running around with pants on our heads at that age, James is killing it on both social media and runways alike, with his claim to fame being his curls.

According to Mashable, his career started on the Internet and then quickly developed. "With the help of his mother, Bonnie, Farouk has made a name for himself — and his trademark curls — on Instagram." On top of that, Bonnie also has a YouTube channel where she posts haircare videos for parents of kids who have natural hair, helping them embrace their kids' natural texture rather than trying to subdue or change it. Just think back to when 2-year-old Blue Ivy got flack for never having "combed hair" — but why try to "tame" what is natural, normal, and beautiful?

Thankfully, the (very) young man is beginning to grow recognized. The Daily Mail reported, "Bonnie says that she initially had her worries when she realized that her son had gathered something of a fan base when she posted his photos online, as she didn't want it to change who he was." While the attention could go to anyone's head, it's a positive sign that people are so excited about his mane of natural locks. In a culture that often prefers adjectives like sleek, straight, and glossy, seeing a person rock their natural curls in all their glory — no matter how young that person may be — not only adds a new beauty ideal into the mix, but also inspires those who have a similar look to be proud of their attributes rather than embarrassed or dissatisfied.

While the kiddo is most definitely Insta-famous (clocking in with around 74,000 followers), he's also appearing in more traditional places in the fashion industry, like runway shows. Mashable reported that "Farouk recently walked in his first runway show for Rich Boys during London Fashion Week," where I'm willing to bet he most definitely made an impression with his auburn ringlets.

While James might still be too young to go to school, it's pretty cool to see that he's making waves and catching the public's attention just because his mother embraced the way he looked rather than trying to make him blend in. The more people we see who break the homogeneous beauty standard mold and represent different ideas of beauty at any and every age, the faster we'll hopefully begin to accept that there's more than one way to look.