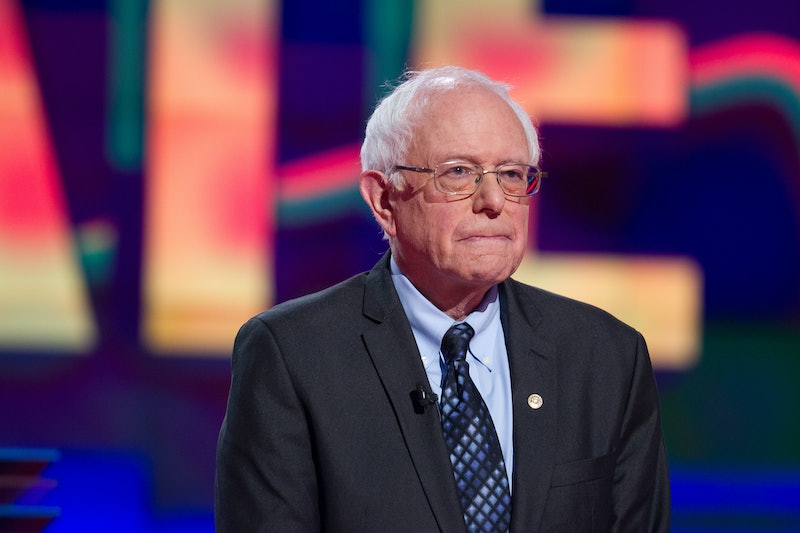 The first Democratic debate after Super Tuesday and Super Saturday was an understandably heated affair. Candidates have won a mixture of states, continued to accrue delegates and superdelegates, and both still stand a chance to nab the presidential nomination. The debate offered a chance for Hillary Clinton and Bernie Sanders to continue setting themselves apart. Unfortunately, the Vermont senator may have gone a little bit too far in essentially shushing his fellow candidate. Now, women are responding to Bernie Sanders' Democratic debate shade in which he waved his finger at Clinton and said, "Excuse me, I'm talking."

Such a tactic is an especially risky one when many women feel as if they've heard similar lines to dismiss them before. Both candidates have been relatively respectful to each other, but the body language and tone that Sanders used made it seem as if he was attempting to shut his fellow candidate down in a seriously problematic way that carries with it far more implications than a friendly reminder not to interrupt. The moment came during a particularly fiery exchange between the two candidates concerning the auto industry bailout of 2008. Needless to say, many women were bothered by the Vermont senator's behavior.

On the other end of the spectrum, plenty of people were applauding the senator or noting the comments as nothing more than an aside to an exchange that carried far more substance than those few words. That mixed reaction was evident at the University of Michigan-Flint, where Sanders' exclamation was met with a mixture of cheers and boos. Both candidates have poured considerable resources into their campaigns and don't always agree on every issue, thus it's par for the course that the two would butt heads on a debate stage.

During another especially tense back and forth between the candidates, Sanders once again resorted to a similar tactic. He instead asked Clinton if he could "finish, please." This time, the audience reaction to Sanders' comments were far more subdued.

The consistently unified front both candidates have put up certainly puts the quip into perspective, however. Clinton helped prompt Sanders on a question regarding a gun control bill passed during the Clinton administration. Were the two engaging in a debate on a GOP stage, they would've undoubtedly received an immature nickname from frontrunner Donald Trump, who's taken to calling fellow candidates Marco Rubio and Ted Cruz as "Little Marco" and "Lyen [sic] Ted."

Maybe such a comment isn't all that bad in the face of the current election season.