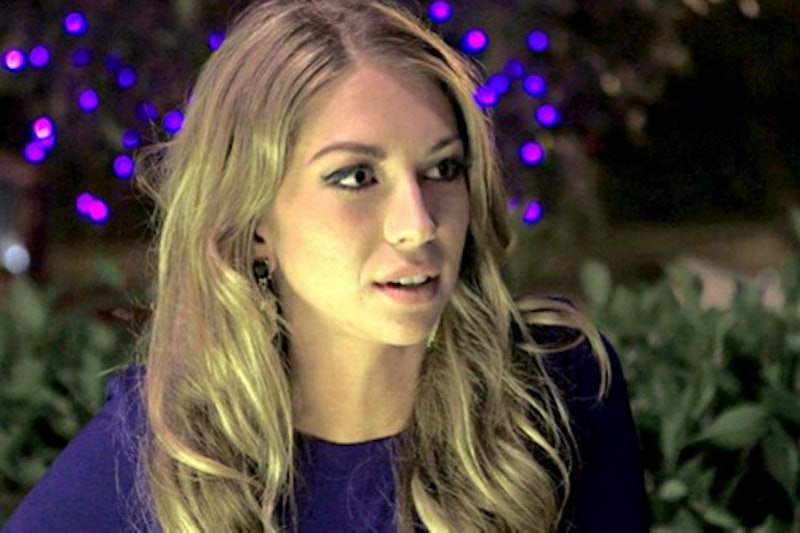 On the penultimate episode of Vanderpump Rules , we heard a great deal about Jax and Kristen’s kiss-less sexcapades. What else happened during the ep? Oh, right. Stassi slapped Kristen. (I still can't believe that went down.) Lines were drawn in the sand. After the slap, a majority of the SUR crew went to the beach. The cooler they dragged behind them drew lines in the sand. No one was going to forgive anyone for anything that happened. How could the finale ever top this?, I wondered. Because this is the pinnacle of reality TV. So, did the finale top last week’s episode? I’m undecided. But that’s a good thing. Back-to-back near-perfect episodes of television? Awesome problem to have.

Before the photo shoot, Katie takes Stassi to “where [she] take[s] all her bitches”: a sweat spa. I don’t know what the technical name for the place is, and I don’t care to look into it. It’s a place you go and sweat to the point of losing weight. Stassi and Katie wear Jiffy Pop outfits, and are then covered with sweat-inducing straightjackets. A sauna this is not.

Kristen is not invited to the staff photo shoot. Lisa Vanderpump thinks that given her recent behavior (the ultimatum, the suspension), it’s best that she’s not there. Eesh. Way to ice her out, Lisa Vanderpump.

When Jax shows up to the photo shoot, he says earnestly, “Annual SUR photo shoot? I feel like we just did this last year.” I hope the Bravo cameras capture the moment if/when he learns what “annual” means. His eyes will bulge out of his skull. Can't wait.

Moments before the SUR staff starts posing and the camera bulbs start flashing, the SUR dudes wrap themselves in Jiffy Pop/straightjacket outfits and sweat the pounds off. Just kidding, they do a bunch of pushups by the pool. Gotta get SWOLE.

At the photo shoot, Stassi and Tom Sandoval sit on some pool chairs and talk about the Kristen/Jax garbage. Tom Sandoval has convinced himself that either Stassi or Jax fabricated the texts/the hookup stories. Stassi tries to show support for Tom Sandoval, but also tells Tom Sandoval that he is in serious denial about the situation.

“Why do you think I hit her fucking face?” Stassi asks. “Because I think she is a disgusting, lying whore.” Oh, Stassi.

On two separate occasions, Lisa Vanderpump asks Stassi to apologize to Kristen for smacking her.

“She deserved to be slapped 47 more times,” Stassi says. Stassi also casually mentions crucifying Kristen. Oh, dear. As not apologetic as Stassi may have been feeling, she obeys Lisa Vanderpump. Such is the power of the Vanderpump. Stassi agrees to talk to Kristen at Scheana’s engagement party.

The Kristen confrontation must wait, however. Before the crying/yelling/fighting begins, everyone watches Scheana perform “Good As Gold” on top of the SUR bar. While Scheana sings, Tom Schwartz and Jax do some Night at the Roxbury dancing. This is the best show on the planet.

“I actually really like this ‘Gold’ song,” Stassi says in a confessional. “It’s catchy. I would even download it… illegally.” Someone alert Lars Ulrich. (Cool Napster lawsuit reference, Rohwedder!)

But nothing good as gold can stay, because after the mini-concert, it's time for Stassi to have The Talk with Kristen and Tom Sandoval. During The Talk, Kristen admits she slept with Jax. KRISTEN ADMITS SHE SLEPT WITH JAX. TOM SANDOVAL SAYS KRISTEN ADMITTED IT TO HIM BEFORE THE ENGAGEMENT PARTY. JAX WAS TELLING THE TRUTH. JAX IS CAPABLE OF TRUTH. IT’S A TERRIBLE TRUTH, BUT IT IS A TRUTH. This is a huge moment.

Stassi yells at Kristen, Kristen cries and says she feels like a scabby turd, and Tom Sandoval jumps in and defends Kristen’s honor. He yells at Stassi. They fight about who is the victim in this situation. Kristen cries some more. All of it is really brutal. “I’ll walk away and let this be about you,” Stassi says as she leaves the table.

Stassi tells everyone at the party that Kristen admitted to hooking up with Jax. Everyone is like, “Ugh.”

Tom Sandoval tries to have a heart-to-heart with Jax. Jax is like, "Meh." Meanwhile, Lisa asks Kristen to quit SUR.

After the failed heart-to-heart with Jax, Tom Sandoval asks, “You don’t ever feel anything, but do you feel this?!” AND THEN HE ATTACKS JAX. OH MY GOD. HE REALLY HITS JAX. A rumble breaks out. SUR turns into a WWE ring. It’s pandemonium. I definitely need to watch it again.

“You don’t ever feel anything, but do you feel this?!” will replay in my brain for forever. So haunting.

Once the melee subsides, everyone tries to comfort one another. Tom Sandoval and Kristen leave the party. Scheana cries about her recently-fixed tooth. Poor Scheana.

Jax Is a Monster And These Are The Things He Says:

And like that, another season of Vanderpump Rules comes to a close. How I feel right now can best be summed up by "Raise Your Glass" by Dena Deadly (the VR song):These are the best days of our lives,Just raise your glasses highThis one's for you tonight.

More like this
What To Know About Simon Guobadia’s 3 Ex-Wives & Children
By Brad Witter
Victoria Fuller & Greg Grippo Addressed Their Relationship Timeline
By Grace Wehniainen
Meghan Markle Just Addressed *Those* Wild 'Real Housewives' Rumours
By Sophie McEvoy
We’ve Got A Text! Another 'Love Island' Series Is On The Way
By Darshita Goyal
Get Even More From Bustle — Sign Up For The Newsletter