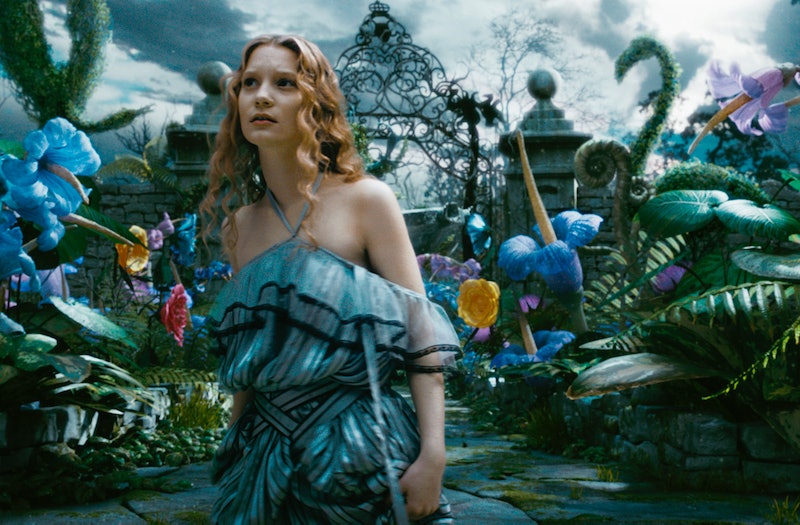 When I think of inspirational books, memoirs are automatically the first genre to pop into my mind. I have a special section on my bookcase dedicated to them, and I have several dogeared "go-to" memoirs that I turn to when I'm feeling down or discouraged. But, in the grand scheme of my life, the book that has had the greatest impact on me and has been my biggest source of inspiration is an unlikely one: Alice's Adventures In Wonderland by Lewis Carroll. Because it's a fantasy novel, I know this may seem like a strange choice — but the premise of having one's world turned upside down is a relatable one, and the way Alice coped with this turn of events was both accessible and inspiring to me.

To be clear, I've never literally fallen down a rabbit hole, swam through my own tears, or been forced to seek the advice of a weed-smoking caterpillar. But, like Alice, a rapid series of events caused my world to change in the blink of an eye when I was a child. I felt as though I'd been transported from my real, safe world to a "wonderland" of sorts where I never knew what to expect. When I was 10 years old, a series of sudden, unexpected traumatic experiences turned my life upside down and I felt like I was living in a different world than the one I previously inhabited.

This happened overnight and, like Alice, I was suddenly in a different world where nothing made sense and the behavior of those around me was incredibly confusing. To me, it was like falling down a rabbit hole and there was no way out so I was forced to figure out how to navigate this new world. Disorienting, surreal experiences lurked at every corner and they quickly changed my perceptions of myself and "reality." When your whole world gets turned upside down, it's natural to no longer feel like yourself. As Alice says: “I can't explain myself, I'm afraid... Because I'm not myself you see" and she observes that, "it’s no use going back to yesterday, because I was a different person then.”

Once Alice enters Wonderland, she experiences a series of unbelievable and even traumatic events. Furthermore, no one understands her dilemma and they're certainly not sympathetic to it. No one will even acknowledge that it's a strange, backward place where there are no apparent rules except for insane ones like "Sentence first — verdict afterwards!" When she tries to express how unbelievable and backward this is, she's completely invalidated and told that she "must be mad," otherwise she wouldn't have come to Wonderland at all.

Despite the constant invalidation, she refuses to be convinced of things that are untrue and even risks her life by picking a fight with the King and Queen of Hearts. Children are impressionable and it's easy to convince them that they're imagining or exaggerating the insane, often cruel events that surround them. Alice taught me that we need to trust ourselves and we can't let the words of other people convince us that we're simply over-reacting — even if authority figures give it their best shot.

I've never literally fallen down a rabbit hole, swam through my own tears, or been forced to seek the advice of a weed-smoking caterpillar. But, like Alice, a rapid series of events caused my world to change in the blink of an eye when I was a child.

In addition to encountering constant invalidation in Wonderland, Alice is repeatedly treated callously and cruelly. Even though she's a lost child, no one attempts to help her. She is alone and, for the most part, forced to navigate Wonderland for herself — and, because there's no rhyme or reason in this world, Alice is forced to make the best of the nonsensical while also grappling with sudden, rapid, and extreme changes in her size. I've felt this way at many times in my life — sometimes, the real world is just as nonsensical and cruel as Wonderland. During these times, I've tried to channel my inner Alice and approach every situation with the spunk, courage, and confidence that she displayed in Wonderland.

As the book progresses, Alice encounters increasingly blatant cruelty and her life is threatened when she dares confront the Queen of Hearts with logic. The fact is that cruelty is often unavoidable — whether we experience it in the high school hallways, at home, or even in the workplace, it's something we all face at different times in our lives. It's up to us how we handle it — we can let it change us, or we can fight back and learn from it. It's incredibly painful to tell our stories and to be invalidated, have our experiences minimized, or be told outright that we're either lying or simply don't understand what happened to us. But Alice didn't let any of this crush her spirit or destroy her spunk — in fact, she took all these experiences and used them shape her into a stronger, more confident individual.

Even when she's in the midst of the chaos, Alice recognizes that this decidedly frightening and unpleasant experience is an opportunity for growth and knowledge:

“It was much pleasanter at home," thought poor Alice, "when one wasn't always growing larger and smaller, and being ordered about by mice and rabbits. I almost wish I hadn't gone down the rabbit-hole... and yet... and yet...”

Although it's natural that she thinks of home where it's "pleasant," Alice doesn't regret her decision to go down the rabbit hole. Sometimes the most trying, nightmarish experiences are the ones that make us the strongest people in the end. I never thought of myself as a particularly strong person until I was forced to be — and I was never especially assertive until circumstances required that I stand up for myself and speak the truth. In retrospect, I'm grateful for the knowledge I gained from my own "Wonderland" experience. It was decidedly frightening and unpleasant when I was in the midst of it, but it forced me out of my idyllic comfort zone and made me realize that I was a strong and capable child who could become an empowered young woman.

Alice taught me that we need to trust ourselves and we can't let the words of other people convince us that we're simply over-reacting — even if authority figures give it their best shot.

When Alice returns to reality, she's learned a great deal from her experience in Wonderland. She discovered her own courage and self-sufficiency that she may never have realized if she had stayed in her comfortable (albeit boring) real world. Although she certainly didn't want to stay in Wonderland forever, just like none of us want to stay in a scary and unpredictable situation, she learned from the experience and presumably was prepared to move on with her life armed with this knowledge. She inspired me to do the same. My life went back to "normal," but I was a different person and a stronger one.

"It would be so nice if something made sense for a change," Alice observes at one point. But in both childhood and adulthood, we have to deal with many things that don't make sense. Because of Alice, I've been inspired to take all these situations — the nonsensical, the cruel, and the invalidating — and make the most of them.