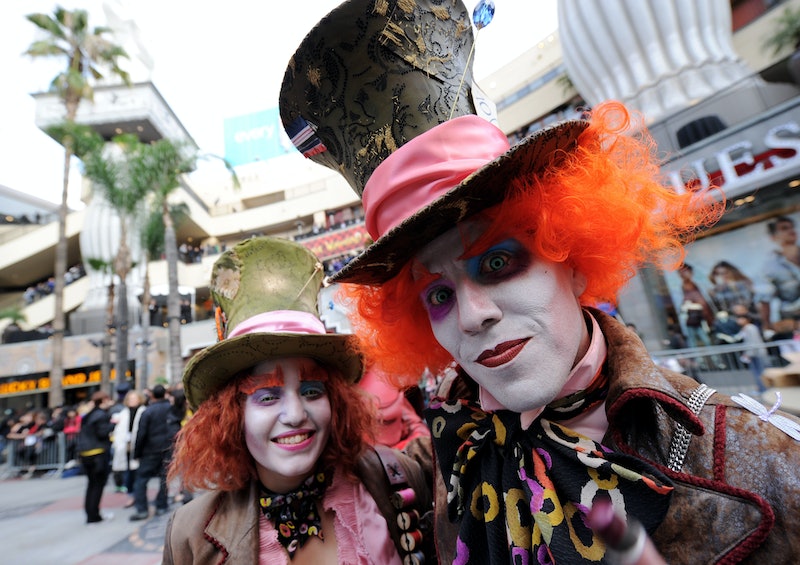 Alice's Adventures in Wonderland , by Lewis Carroll, a pseudonym for Charles Lutwidge Dodgson, was published in 1865, 150 years ago. The book, its characters, its scenes, and something about its aura has been seared into our cultural consciousness. People who've never read the book know who Alice is. There's the Disney movie, a bizarre short animated film, the 2010 live-action movie, and quite a few more.

The characters from the book are vivid and memorable, from Alice herself to the Mad Hatter to the Duchess to the Queen of Hearts. Each one of them is ridiculous, interesting, bizarre, and often completely nonsensical. I mean, sure, the way Johnny Depp recites the Jabberwocky poem makes it super-sexy (roll those Rs, Johnny!) but, honestly, it's a showoff poem by a brilliant linguist that is meant to play with language more than build any sort of character.

But what if I pulled an Enchanted and plucked the characters from their original, fictional setting and put them right into 2015 for the 150th anniversary of their creation this month? Here's what I think they would be like:

The Queen of Hearts

In 2015, the Queen of Hearts would most likely be a high-powered but ridiculous celebrity. You know the type. The ones who make bizarre statements (like "off with their heads!") and then tell the media they were taken out of context. The kind who are famous for being famous. The Queen of Hearts would be a Paris Hilton, a Kim Kardashian, a famous-for-being-famous woman whose fans are 100 percent loyal to her. She would start Twitter wars, and we'd write news articles about her latest scandal. And we'd love every second of it, thank you very much.

The Duchess is your 10th grade History teacher. She’s the most unattractive person you have ever laid eyes on, which makes her the butt of the school’s not-so-secret jokes. So, you can’t really blame her for also being the most notoriously tough grader in the school’s history, or for being the least fun, or the most apt to dole out detentions like they're Halloween candy. When you meet with her one-on-one (terrifyingly so, keeping your distance), the Duchess spends the entire time trying to convince you that she isn’t so bad — she’s just misunderstood. Right.

The white rabbit is your dandy, man-bun sporting friend who dresses in waistcoats and has a curly mustache and works at the coolest cafe in town. Only problem is that he's always late to work (partly because he takes more time than you to get dressed in the morning) and he's also late whenever you try to get together with him. He also always leaves you to go and talk to cooler (or more powerful and influential) people. He's planning a startup, a band, a freelance web design business, and a fashion line. He's the kind of guy you hang around because he's, well, a character, but you're also kind of interested to see what he's going to be like in 10 years. A deadbeat? Working for the president? The next Mark Zuckerberg? It all depends on whether he'll make it to the interviews on time.

The Cheshire cat is that friend who's there one minute, and gone the next, like Jessa from Girls. For all you know he's in Spain right now. Maybe Canada. Maybe New Zealand. All you know is he'll probably call you for your help because he got himself into some trouble and needs to crash on your couch for a while. He'll nip off after a few days of regaling you with tales of high jinks both foreign and domestic, leaving little more than a note saying he's off chasing his next American (or South American) dream. You love him, though, because everyone needs to hear some crazy stories once in a while.

The Hatter is at the top of the social ladder, even though he's completely crazy and everyone knows it. He's the kind of crazy person who'll put magic mushrooms in your meal without telling you, or will take you on a long walk through the park one night to meet the homeless woman he's best friends with, or will make you go out to a rave on a Tuesday night by promising you that it will be the best party this century has ever seen and you won't regret it. Something usually goes wrong every time. But you love the Hatter, because he's your best cure for FOMO.

2015 Alice is just your average manic pixie dream girl whose worst nightmare is being average. She wears adorable little vintage outfits — she even wore a full-on French maid costume to a summer concert at Brooklyn's McCarren Park. She asks friends and strangers alike inappropriate questions, usually about their sexual preferences and family backgrounds, just to be zany. If you're not in love with her, half the people you know are. She also has no sense of direction, cries easily, and talks to everyone on the street whether she knows them or not. It's kind of embarrassing to be around her, actually, especially when she starts quoting Nietzsche, just to make sure everyone knows that she majored in philosophy.