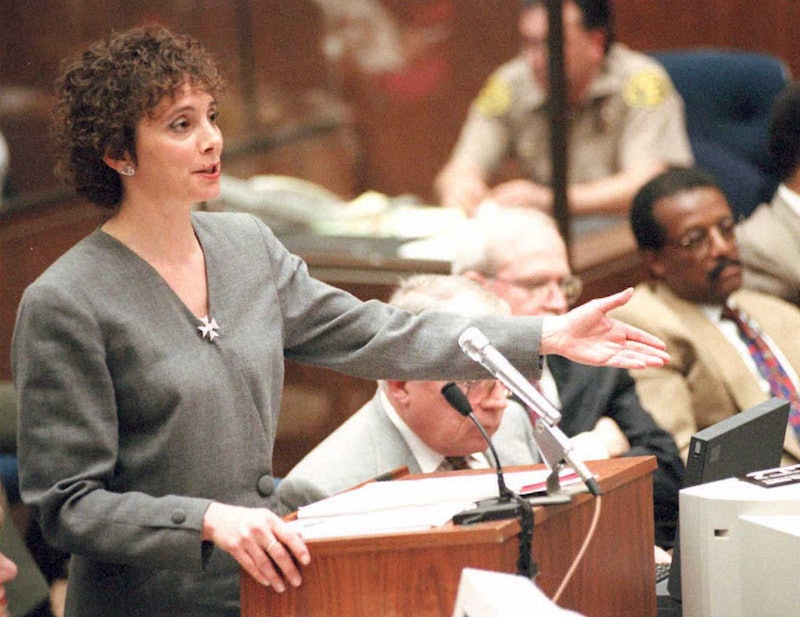 So far, most of what the FX anthology series The People v. O.J. Simpson: American Crime Story has shown of prosecutor Marcia Clark's life has been the professional side of it, as she prepares and argues the state's case. But the media didn't stay out of Clark's private life when she became a reluctant celebrity in 1995, and so the show can't either. There's a particularly moving scene in an early episode where actress Sarah Paulson plays Clark interacting at home with one of her young sons. Famously, the attorney was navigating the dissolution of her second marriage while the Simpson trial played out. The public was devouring any information they could glean about the players in the Trial of the Century, especially Clark. That included the details of the lives of Marcia Clark's two children, Travis and Kyle. Where are the attorney's sons now?

Let's back up for a minute. According to a profile from The Guardian, Marcia speedily wed Scientology administrator Gordon Clark because Gordon's position forbade him from dating someone outside of the church, so they married to get around that rule. Together, they had two children, Travis and Kyle, and People reported that after 12 years of marriage, Marcia filed for divorce from Gordon four days before joining the O.J. Simpson case.

Needless to say, the timing was terrible. A custody battle erupted between the two exes just in time to feed the Simpson tabloid machine. Gordon referenced Marcia's huge role in the trial in his bid for custody of their children, then ages 3 and 5, stoking a national argument about working mothers. In 1995, the Los Angeles Times reported on the papers filed, in which Gordon had written, "While I commend [Marcia's] brilliance, her legal ability and her tremendous competence as an attorney, I do not want our children to continue to suffer because she is never home, and never has any time to spend with them." Marcia's response reasserted her commitment to her kids and chastised her former husband for making their personal struggles public. "I feel it is inappropriate of me to discuss details of my marital dissolution case or child custody issues in the media," Clark said through her lawyer.

After the conclusion of the trial in 1996, People updated their readers on Marcia's life, reporting that though she and Gordon were still "hammer[ing] out a settlement," she had "settled comfortably into her role as chauffeur and playmate to her two young sons." The Guardian's 2011 profile of Marcia said, "In the years after the case ended, she moved to the suburbs with her boys, and forged a happy, ordinary life."

Marcia is still a public figure, though she's much more in control of when and how she's observed. You might catch her as a legal correspondent on a major news channel; she's also written a memoir and a few crime novels. Her sons, meanwhile, hit the height of their fame at 3 and 5 years old.

Kyle and Travis Clark aren't easily located online. A Facebook profile for Travis Clark lists his employer as a legal finance consulting firm in San Francisco and his father as Gordon Clark. In a recent profile of Marcia from The Cut, the only update offered on her sons is that they are "grown."

Considering how much scrutiny the Simpson trial subjected the Clark family to in their youth, it's not a surprise that Travis and Kyle would prefer to stay out of the spotlight as adults.

Editor's Note: This article has been updated to reflect that Clark's sons' names are Travis and Kyle, not Travis and Trevor.

More like this
The Staircase Explores The Murder Trial That Ripped A Family Apart
By Gretchen Smail
David Rudolf, Michael Peterson’s Attorney In 'The Staircase,' Is Still Practicing
By Taylor Maple and Morgan Leigh Davies
Where Michael Peterson From 'The Staircase' is Now
By Justice Namaste
Here’s Where Caitlin Atwater Is After HBO Max’s ‘The Staircase’
By Brad Witter and Lindsay Denninger
Get Even More From Bustle — Sign Up For The Newsletter