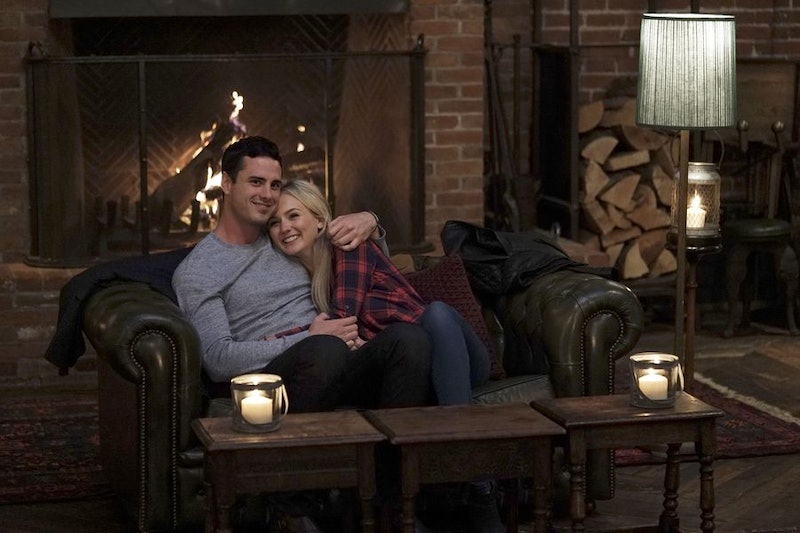 On ABC's The Bachelor, the fun and games are over and it's time for Ben Higgins to make his big choice: Lauren B. or JoJo. I think it's been pretty clear since day one that Ben has been totally smitten with Lauren. But does Ben propose to Lauren B. on The Bachelor ? I sincerely hope he does pop the question to the Californian flight attendant to cap off this season. These two love birds truly seem to belong together and it's been so obvious since they first met. And don't worry, there are no spoilers ahead, just theory!

During last week's episode, Ben even said it himself: "Seeing Lauren for the first time was really the closet thing I've ever felt to love at first sight. With Lauren, things just feel right. I look at her with googly eyes. " At first, I must admit I was skeptical, but after watching these two bond and fall in love over the course of this season, I have to say I'm firmly on Team Ben and Lauren. They just seem so happy together and that joy radiates off the screen and cancels out any of that, you know, other drama going on or awkward moments in the house.

I'm really hoping Ben asks Lauren B. to marry him, because they are clearly soulmates. Here's why I think she's the one.

They Make Each Other Happy

"You make me so happy, Ben," Lauren has told him before they smooched it up. Ben also seems to light up when he sees her and he always has a smile on his face when he's with her.

They Have So Much Fun Together

Whether they're in a hot tub or eating from food trucks in Portland, Ben and Lauren always seem to have a blast on every single one of those dates. I can only imagine this will translate to every day of their lives together.

They Each Think They're Too Good For Each Other

When Ben met Lauren's sister during their hometown date, he cried while talking about Lauren. "I knew it — you're too good for me," he told Lauren last week. "You're beautiful, smart, sweet and sensitive."

Lauren said she felt the same about him. "There have been moments where I've thought, 'Is this too good to be true?'" she said. "'Ben's too good for me.' I have thought that exact same thing."

They Both Loved Each Other For A Long Time

They were both scared to admit that they loved each other, but last week, they both finally put all the chips on the table. "You really are the man of my dreams," Lauren told him when she finally said those three words in the Fantasy Suite.

His response: "I've known I've been in love with you for awhile, as well." Aww!

Her Family Likes Him

At least Lauren's sister Molly gives her her blessing and says she really likes Ben. And he also likes her family. "Your family is incredible," he told Lauren in last week's episode. "I loved them."

They Miss Each Other

Last week, Ben hadn't seen Lauren since their hometown date and he said he was looking forward to seeing her again. "It was so weird going on the hometown date and not being about to talk to you about it," he said to Lauren while they sat on the beach.

Later, she admitted the same to him over dinner. "I feel so good when I'm with you, but your mind goes to weird places when you're apart," Lauren said.

We'll find out in no time who he chooses, but frankly, if it's not Lauren, I'll eat my hat.