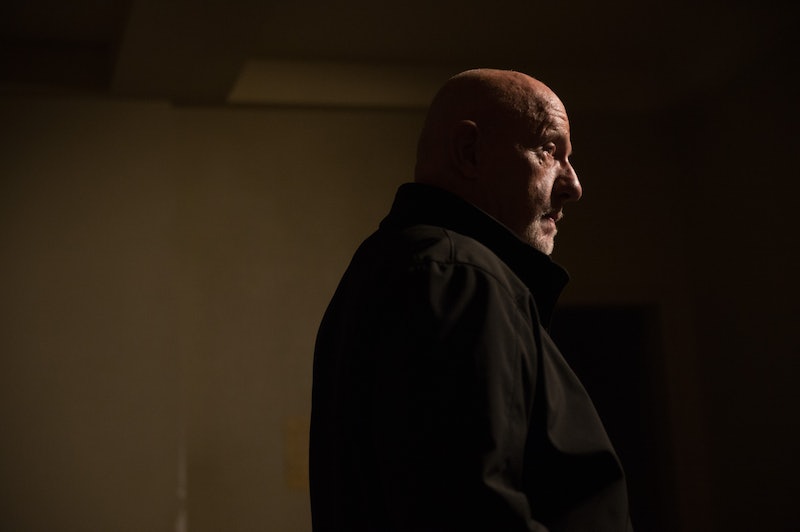 Although Nacho approached Mike about helping him "get rid of somebody" at the end of last week's episode of AMC's Better Call Saul , viewers didn't find out who that "somebody" was until this week's episode, "Gloves Off"… and it turned out that the target of Nacho's hit was a familiar face to Breaking Bad viewers: villainous drug dealer Tuco Salamanca who terrorized Walter White and Jesse Pinkman for the first two seasons of Saul's predecessor, before being fatally shot by Walt's brother-in-law, DEA Agent Hank Schrader.

Although we previously saw Tuco in the first two episodes of Saul's inaugural season, this is the first time we've seen him since. Last year, it was Saul (née Jimmy) who tangled with the dealer after his two hired goons accidentally targeted Tuco's abuela's car for a con. Fortunately, the lawyer managed to talk Tuco out of killing both young men: he settled for "only" breaking one of each of their legs as retribution.

This time, it wasn't Jimmy who encountered Tuco, but ex-cop and fixer Mike Ehrmantraut, at the behest of Tuco's lieutenant, Ignacio "Nacho" Varga. Concerned that his partner-in-crime was becoming addicted to meth — and acting increasingly crazy and unpredictable under its influence — Nacho decided that it was time to take Tuco out. Although Mike had never killed anybody before, he agreed to the job because he needed the money to help his daughter-in-law buy a new home.

Unfortunately, Mike immediately saw several holes in Nacho's plan, and suggested sniping the dealer from afar instead. But ultimately, Mike settled on a much more hands-on approach that would make Tuco go away without killing and without snitching. He drove up to the restaurant where Tuco and Nacho were doing business, purposefully dinging Tuco's bumper while he was parking. He then nonchalantly proceeded to order his tacos, while Tuco got himself worked up over the old man's disrespect.

This confrontation eventually turned into a fist fight in the parking lot as Tuco first drew his gun and then proceeded punching Mike in the face over and over and over… until the police showed up and arrested Tuco. (Mike had preemptively called and notified them of the assault.) So Tuco's out of the picture, Nacho didn't have to snitch, and Mike didn't have to kill anybody — although he got a face that looked like raw hamburger out of the bargain.

Originally, Nacho was going to give Mike $50,000 for offing his boss. Instead, the fixer got $25,000 for putting him in prison for a few years. When Nacho pointed out that Mike had put in twice the effort for half the money, he asked him why he had gone to such lengths to not pull the trigger. Mike's answer? Cryptic silence as he took his money, got in his car, and drove off into the night.