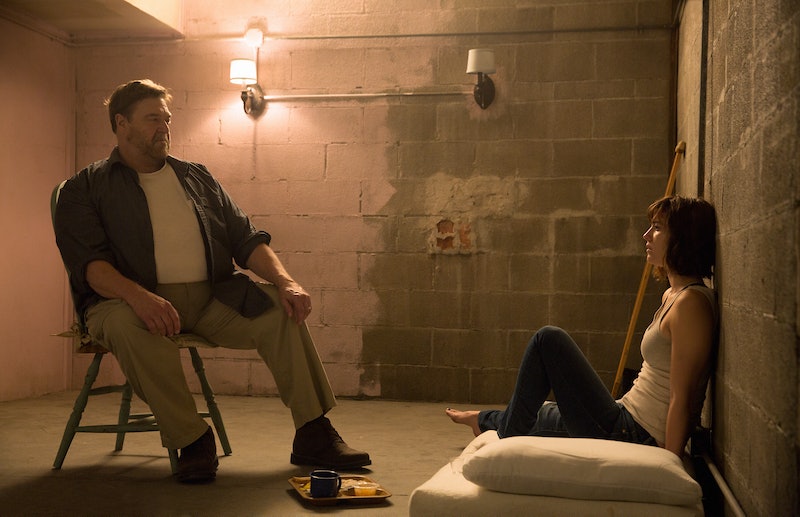 If you've seen the trailer for 10 Cloverfield Lane, you know the cast is pretty small. Stars Mary Elizabeth Winstead, John Goodman and John Gallagher Jr. are the only actors who appear in any and all of the promotional materials for the secretive film. And, based on what's known about the plot, the three of them are alone in a bunker, alive, while everyone else has died after a mysterious attack. At least, that's what Howard (Goodman) tells Michelle (Winstead). Regardless of whether or not Howard is telling the truth, the bottom line is that the trailers suggest that the cast is essentially a total of three people. Watching the film, you might agree. Sure there are a few other characters spotted here and there, but they are negligible at best. There is, however, one surprising cameo in the movie, that of an A-list actor. Yeah, that's Bradley Cooper in 10 Cloverfield Lane , and his cameo is totally mind-blowing.

Clever fans might have noticed Cooper's name added to the 10 Cloverfield Lane cast list on IMDB recently. However, his character is unnamed, and no information has been released or teased regarding his involvement with the project, which suggests that his name on the cast list could've just been a simple mistake — but happily, it's not, and his appearance in the film actually makes some sense. Fans familiar with Bad Robot, J.J. Abrams' company that produced and developed 10 Cloverfield Lane, know that Cooper actually got one of his big breaks playing Will Tippin on Abrams' show Alias . Given Abrams' penchant for re-using actors, like his friend Greg Grunberg who also starred in Alias (and Felicity, and had a bit part in The Force Awakens), it's understandable that the producer would give Cooper a top secret cameo in the new Cloverfield movie.

Cooper's cameo in 10 Cloverfield Lane is pretty epic, but not because he flashes those baby blues. In fact, the actor doesn't even appear on screen in the film. Instead, his voice is heard over the phone in only one short scene. His character, Ben, Michelle's boyfriend, never re-appears in the film. It's the kind of appearance you watch and then forget about because, let's say, the main character is being kept prisoner in a cell in a bunker during what appears to be the end of the world. It's also the kind of role that makes it hard to recognize the actor. I love Cooper as much as the next person who sat through The Hangover, but he's no Morgan Freeman, or even George Clooney — he's not exactly known for his voice. So, seeing his name in the credits is pretty surprising.

Despite the tough-to-spot cameo, Cooper's short appearance in 10 Cloverfield Lane is likely to spark a lot of online theories, and, hey, if the Cloverfield franchise continues to grow, maybe he'll actually make it on screen in the next one.