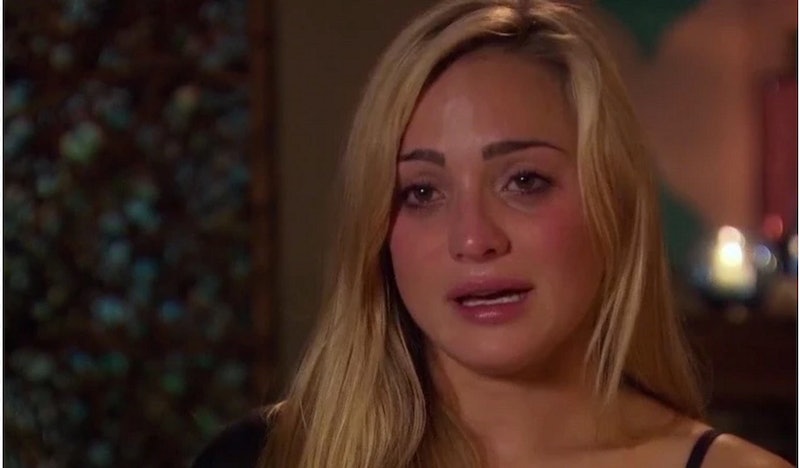 If you have kept up with The Bachelor with the rabid fervor it deserves, then you know about The Bachelor "black eye" promo. In the beginning of the season there was a teaser displaying a scene where Leah seemed to be sporting a major shiner. Since it was a shocking tease, the Twittersphere had some real questions about the mystery. Leah even said in the clip that someone had hit her in the face! What the what! But, then the actual scene was never shown during the season. Fear not — Leah has broken her silence on Twitter. That's right — Leah has responded to the intrigue surrounded her "black eye" promo, yet it seems that we may never get a straight answer as her tweet read: "The black eye mystery will forever be a mystery." And, ABC declined to comment when asked.

Though it seemed as though everyone had their own opinions about what happened to Leah's face (could it have been a fight with Lace? A knockdown brawl with Olivia?), it seems that the answer may forever be buried — unless, that is, it comes up tonight it in the always revealing Women Tell All. The live event is practically an arena where all of the women can air their grievances, and fans have seen some totally insane things happen in the past episodes of Women Tell All, so I don't think I'm alone in crossing my fingers that this mystery is finally solved.

While we await the real answer (if it's ever coming), here are a few theories about what could have possibly transpired.

Leah Got Into A Fight

Although, to be fair, this is probably a joking tweet.

Leah Got Hurt During The Soccer Date

Leah was pretty involved during the date where Ben had all of the women split into opposing soccer teams. Though it looked like it was all fun and games, she could have taken a fall (or maybe an elbow to the face) resulting in a totally accidental black eye.

It Could Be Messed-Up Makeup

These women do cry a lot, or maybe Leah touched her face when she was wearing dark makeup. It's a stretch, but that's what I'm hoping because I don't want to think that Leah could have really been hurt!

Though we may or may not find out the answer to Leah's supposed black eye, at least we know she's all good now and able to joke about the mystery.

More like this
It’s Official: 'The Bachelorette' Is No Longer A Fairy Tale
By Samantha Allen
Everything To Know About 'Bachelor' Host Jesse Palmer
By Justice Namaste and Radhika Menon
Former 'Bachelor' Producer Elan Gale Knows The Secret To Your Favorite Shows
By Samantha Rollins
Why Did Meatball Leave 'The Bachelorette'? His Second Chance Didn’t Last Too Long
By Grace Wehniainen
Get Even More From Bustle — Sign Up For The Newsletter