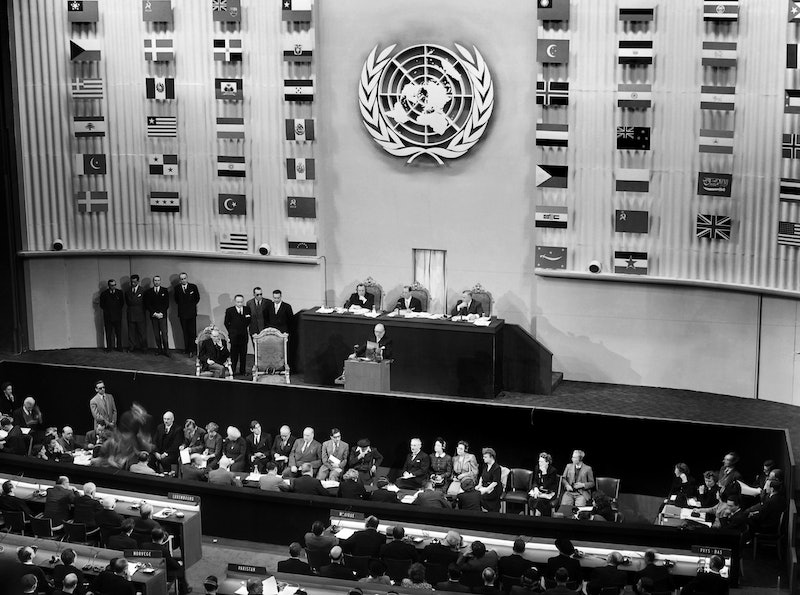 The United Nations Charter began advocating for global human rights and peace on June 26, 1945, right before the end of World War II. The U.N.'s principles were first formulated during a conference in San Francisco. U.S. President Franklin Roosevelt, British Prime Minister Winston Churchill, and Soviet Premier Joseph Stalin oversaw the conference, according to History.com. The U.N. was a male-dominated organization from the start; however, since March is Women's History Month, it is important to explore women's involvement in the U.N. over the years. Frieda Dalen was the first woman to speak at the United Nations, and she was a tireless champion for women from the very beginning.

Dalen was born in Skedsmo, Norway, on Dec. 13, 1895, where she eventually became a teacher and an organizational activist. Dalen lived and worked in Norway during the Nazi invasion throughout World War II and she quickly became an advocate for teachers' civil resistance. Just a few months after the war ended in September 1945, Dalen was appointed one of the Norwegian delegates to the United Nations' first General Assembly, which was held in London in 1946. It was during the inaugural U.N. General Assembly that Dalen became the first woman to speak at the U.N., making history and setting a standard for women's inclusion for years to come.

As a teacher, Dalen worked at various schools across Norway from the 1920s to 1940 when the country was invaded by Nazis. Rather than giving up her work during this tumultuous time, Dalen served as a representative for the Coordination Committee of the Norwegian teachers' civil resistance movement. This role allowed Dalen to take the lead on fighting for teachers' rights during the Nazi invasion, and she planned the overall resistance campaign for Norwegians. Because the Coordination Committee focused on how their resistance movements would influence Norway's post-war restoration, Dalen became instrumental in proposing and implementing strategies for the education field and for women's rights.

Dalen was known for her ability to convey powerful messages to any audience throughout her career. During the Oslo Summit on Education for Development, U.N. Secretary General Ban Ki-moon honored various women throughout history who made significant advances in the education field. During his speech, he recalled Dalen's numerous achievements to the audience, reminding them that she led a secret society of teachers against the Nazis during World War II. Ki-moon compared Dalen's advances toward gender equality and global peace to Pakistani activist Malala Yousafzai, who was shot in the head by a Taliban gunmen when she returned home from school one day.

When the war ended, Norway sent her to the brand-new United Nations. She pointed out that women suffered and resisted during the war — and the world could not afford to leave them out of building peace. This Norwegian teacher knew what Malala shows today — it takes courage to achieve justice. And we will never achieve justice until women have equal rights.

After Dalen addressed the U.N., between 1946 and 1958 she became a member of numerous UNESCO committees — United Nations Educational, Scientific and Cultural Organization — and she served as president of various unions and organizations in Norway. Dalen passed away on Feb. 15, 1995, after advocating for women's rights, education rights, and global peace for more than 50 years.