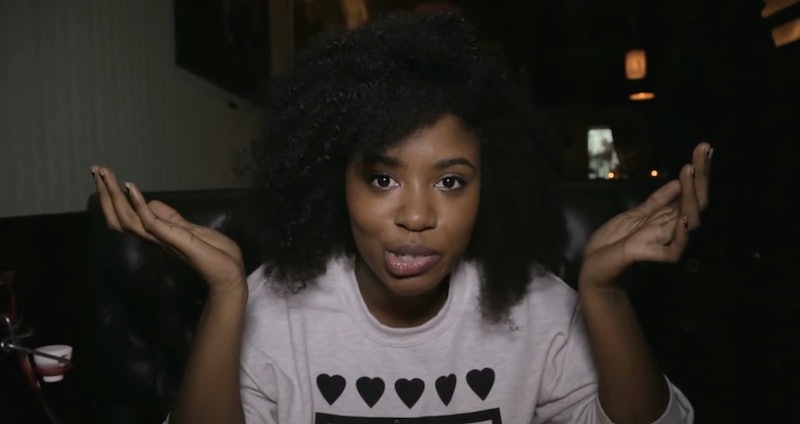 Interracial dating is everywhere, both in the media and in real life. Americans see multiracial families and couplings on Scandal , the Mindy Project , Modern Family, and a multitude of other successful sitcoms. The prevalence of interracial couples — which the Pew Research Center estimates at 15 percent of couples married in 2010 — sells the idea that we’re far removed from the days of segregated lunch counters and bathrooms. But that doesn't mean that there sometimes aren't cultural divides to overcome in interracial relationships. YouTube vlogger Akilah’s viral video "11 Things to Keep in Mind Before Dating a Black Woman" hilariously addresses some of the taboo topics that may be broached in interracial relationships. She brilliantly uses satire to undercut the idea that interracial dating erases cultural difference. Here are my six takeaways from Akilah’s video, which you can see below.

1. Post-racialism is still a fantasy.

Supporters of colorblind ideologies assert that the rising number of interracial marriages prove race is no longer a determining factor in life’s outcomes. Yet, we have a continual need to converse about acceptable boundaries in interracial relationships. Akilah spends almost two minutes offering tidbits about what it means to date a black woman and how it will be perceived among relatives, friends, and coworkers. Post-racial ideologies attempt to erase cultural differences; that is an impossible task. We see Akilah navigating these distinct cultural cues when she tells her partner “That’s not what ashy means” and follows it up with “That’s not what nappy means.”

Few things bother me more than the assumption that dating interracially will rewire cultural conditioning. We’ve been indoctrinated in a culture that attaches danger to black male bodies and promiscuity, unworthiness, and ugliness to black female bodies. Dating one person of color doesn’t abolish preconceived notions. Akilah uncorks this difficult terrain when she tells her partner that she won’t shoulder his or his friends’ white guilt while watching films like The Help, D’jango Unchained, and 12 Years a Slave .

3. Getting external approval is the hardest part.

In the video, Akilah tells her partner to tell his family that she exists. It is indication that he is attempting to hide from his parents that he’s dating a woman of color. It is often difficult to introduce and integrate a partner of a different racial background into a family. Families can be supportive or disapproving but either way, race may be the elephant in the room. Actress and xoJane writer, Pia Glenn, tackled this issue in a vulnerable article on her white boyfriend’s refusal to introduce her to his family. She writes:

“What I never imagined was that I was simply a secret. And I still am. During the Very Difficult Conversation, when I said to Pizza what I have just said to you, he got quiet and apologized. He said “I just can’t tell them. And that’s my own shit. I know I should, but that would be….a big step for me. I just can’t.”

Seeking familial approval is natural progression in relationships, but experiencing a real-life version of Guess Who’s Coming to Dinner is a hassle some people would rather avoid.

4. Black women are tired of being exoticized.

Black women have been exoticized and ostracized for centuries. We’re hypersexual, but also unattractive. It’s a difficult space to exist in, especially when dating interracially. Akilah addresses it boldly when she tells her partner to tell his friends that she’s human, just as all women are. We’re not amazons, Hottentot Venuses, jezebels, freaks, or any of the other controlling images attached to our beings. Dating a black woman is not an experiment that can be laughed about with friends over beers.

Hair is hair. It should be simple, but it’s not. Our coifs can be political statements, assimilations into mainstream culture, and even odes to ancestors. Some black women purchase their hair while others wear it chemically-altered. But no matter how we style our tresses, our hair is a visible representation of our identity. Black women are burdened with our hair as a site of fascination. Some women of color are comfortable with strangers touching their hair, but the assumption that we all are is quickly shut down by Akilah when she tells her partner his family and friends can’t. It’s a moment many black women — including me — are accustomed to. Akilah’s quick-witted “Stop staring at my satin cap” quip is both hilarious and sharp in examining those pesky cultural perimeters.

6. We’ve come far, but still have further to go.

Despite the progress we've made on interracial dating, Akilah’s video still resonates. We’re navigating a Barack Obama-led nation where interracial couples are as accepted as apple pie and baseball, where they are represented on TV shows and in Cheerios commercials, where I am the proud aunt to biracial nieces and student to biracial professors — and still, we’re not even close to finishing the journey toward equality.