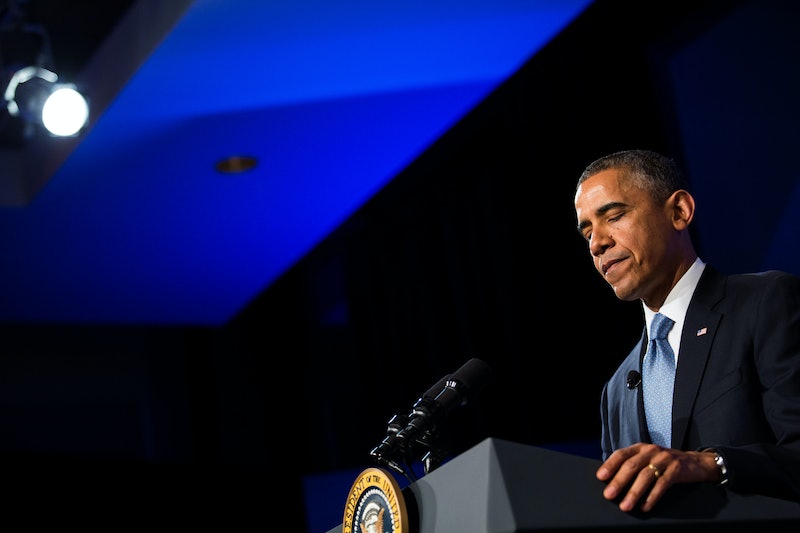 In five years' time, President Obama is going to look back on 2013 and shudder. The first year of the President's second term hasn't exactly gone according to plan, what with all of that failed political grandstanding on Syria, the revelation that, yes, the NSA is snooping into absolutely every aspect of your life, the entire Obamacare debacle, and – oh yeah! — the shuttering down of the government for an entire fortnight.

Better luck over the next three years, Obama. We bring you the year 2013, in Obama reaction GIFs.

NOVEMBER 2012: Things started out so well.

In late November of 2012, Obama scored a victory over Mitt Romney, who has since thankfully faded into obscurity (except for that cookbook.) In Chicago, the reelected president gave a victory speech every bit as tear-inducing as any Disney movie, thanking Michelle ("I have never loved you more,") his vice-president and "happy warrior" Joe Biden, his two daughters, and every single person that voted. Now, Obama concluded, it's time to get to work. "Reducing our deficit. Reforming our tax code. Fixing our immigration system. Freeing ourselves from foreign oil. We've got more work to do."

Obama had high hopes for 2013, including a total, final overhaul of the healthcare system, and keeping the government open.

JANUARY: The inauguration was lovely.

Shortly after being chosen as TIME magazine's "Person Of The Year," Obama was officially sworn in as President for a second term. The president had kicked off discussions regarding gun reform and the removal of U.S. troops from Afghanistan, and things were looking good. But maybe we were all just basking in the rose-tinted glow of not having Mitt Romney as our nation's president.

Also, the First Family's antics while waiting around pre-inauguration were too adorable for words.

From there, it was downhill. Steeply downhill.

As the sequester drew closer, Obama grew more irate at the Republican fringe that just wouldn't play nice. "[The crisis] is happening because a choice that Republicans in Congress have made," he announced. (Not for the last time.) "They have allowed these cuts to happen because they refuse to budge on closing a single wasteful loophole to help reduce the deficit."

Faced with a complete lack of options, a very angry Obama formally signed the cuts into effect in early March. The president's approval ratings promptly sank.

In early June, former NSA contractor Edward Snowden made extra-extra-sure that the world knew about the "classified" surveillance programs carried out by the National Security Agency. Snowden leaked hundreds of thousands of secure documents to the world's most respected media publications. Those programs, it turned out, consisted of every kind of surveillance you can imagine: collecting metadata, tapping the communications of America's allies, and keeping records of regular Americans' electronic communications. And the revelations went on and on and on.

"We don't have a domestic spying program," Obama promised. "There is no spying on Americans."

STILL JUNE: The Supreme Court struck down the DOMA.

Sure, Obama didn't always lend his support to same-sex marriage. But he's "evolved," don'tcha know? By the time the Supreme Court struck down key provisions of DOMA on June 26, lifting the main federal obstacle blocking gay marriage, Obama had long registered his support for the issue. DOMA going all unconstitutional was great news for his administration and, well, for everyone. Okay, maybe not everyone: the GOP wasn't happy.

"I applaud the Supreme Court’s decision to strike down the Defense of Marriage Act," Obama said in a speech. "The laws of our land are catching up to the fundamental truth that millions of Americans hold in our hearts; when all Americans are treated as equal, no matter who they are or whom they love, we are all more free."

That very same day, Obama swore to make headway on climate change, which felt like even more good news. He then left on a tour of Africa, presumingly hoping that the whole NSA thing would blow over and that he'd steered the Obama administration ship in the right direction.

That buoyancy would not last long.

AUGUST: That time we almost went to war with Syria.

In August, it emerged that hundreds of Syrian citizens had fallen victim to a deadly chemical weapons attack, apparently by Syria's own President, Bashar al-Assad. Before the UN even had proof that a chemical attack had occurred, or that al-Assad was to blame, America had sworn to launch punitive missile strikes to punish Assad, citing "international norms." Repeatedly.

A bunch of major American allies, including Russia, China, and the United Kingdom, condemned or refused to join in on America's planned retaliation. The Obama administration wouldn't back down, even as numerous members of Congress refused to give approval. Finally, John Kerry made a throwaway comment that prompted Russia to ask Syria nicely to let international powers destroy their weapons. Syria agreed. America looked very silly.

When an international-relations strategy ends with Vladimir Putin looking like the good guy, you know you've messed up.

OCTOBER: At which point... the government shut down.

We're still recovering from this month. Basically, the GOP refused to compromise on next year's federal budget: the proposed plan included funding for Obamacare, and Republicans do not like Obamacare. They fought against the proposed bill, leading to a seemingly endless tug-of-war. Eventually, when a budget wasn't agreed on, the government shut down. 800,000 workers were furloughed. Michelle Obama's plants began to die.

The Affordable Care Act was meant to be Obama's legacy: a total and complete overhaul of the healthcare system, excepting no one, that would safeguard the long-term health of millions and millions of Americans. Unfortunately, its website is best known these days as a punchline.

By November, Obama's trust ratings were in the gutter. Oh, and this line, initially the White House's policy regarding health insurance, did not help.

Because, as soon as Obamacare actually made an appearance, the line swiftly became this.

The Affordable Care Act's long-awaited debut was nothing short of a disaster. The exchange website Healthcare.gov was hideously buggy and ineffective, and it later emerged that the Obama administration had known for years that this would probably happen. The number of sign-ups have been roughly an eighth of what was predicted, and by mid-November the President had announced: "We botched the rollout."