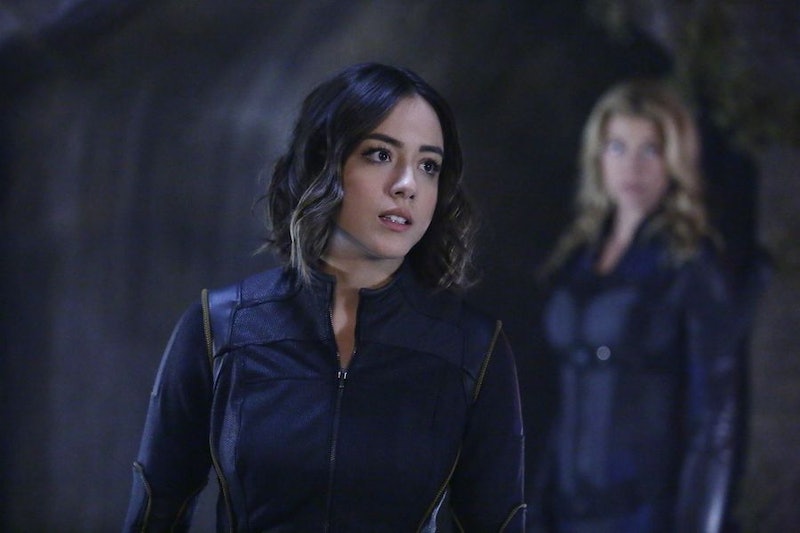 The second season of ABC's Marvel's Agents Of S.H.I.E.L.D. ended with the promise that Season 3 would see the rise of the Secret Warriors. And while that promise has technically been kept, that whole storyline has been on something of a slow burn while S.H.I.E.L.D. has grappled with the reemergence of Hydra and the Inhuman entity on Maveth. Now that the show is returning from its prolonged midseason hiatus, star Clark Gregg teased to TV Guide that the long-simmering plot line will finally come to the fore: "There is some exciting stuff coming with Secret Warriors. Hopefully it will be exciting enough that we'll have a fighting chance against what's coming to find us." But just who are the Secret Warriors, anyway?

In the pages of Marvel Comics, the Secret Warriors are a team of superpowered S.H.I.E.L.D. agents assembled by Director Nick Fury to fight the Secret Invasion of the Skrull army. After that war was won, they went on to help the Director combat the growing threat of Hydra within the ranks of S.H.I.E.L.D. For a show that has not always hewn too closely to its own source material (think Daisy's origin being rewritten from mutant to Inhuman), S.H.I.E.L.D.'s adaptation of the Secret Warriors has been fairly faithful thus far.

Obviously, the team is under the leadership of Director Mack rather than Director Fury. And team members Joey Gutierrez and Lincoln Campbell were never Secret Warriors in the comics — seeing as how their characters are original to the TV series. And while all the team members on the show so far are Inhumans, on the page the Secret Warriors were a combination of Inhumans, mutants, gods, and other supernatural beings. But Daisy Johnson, aka Quake, is a key member of the team in both the comics and the show, and the show's version of the Secret Warriors also exists to fight Hydra, like their comics' counterparts.

In fact, it looks like S.H.I.E.L.D. will be getting even more faithful to the comics in the latter half of the season: in Tuesday's midseason premiere, "Bouncing Back," viewers will meet a new Inhuman by the name of Elena Rodriguez — code name Slingshot — played by Mexican actress Natalia Cordova-Buckley (pictured above). Comic fans will know that Slingshot is a character ripped straight from the page, a member of the Secret Warriors with the Quicksilver-like ability to run faster than the eye can see… with the caveat that, when she stops running, she always returns to her starting place. She's also the daughter of super-powered super-criminal Griffin; in fact, in the comics all the Secret Warriors are descendants of other powered beings. (Remember, Daisy is the daughter of mutating mad scientist Mr. Hyde.)

Was it coincidence or deliberate choice that the first two members of Marvel's Secret Warriors adapted to the screen were the two female members of the team? Regardless, if S.H.I.E.L.D. continues to introduce established characters in the second half of Season 3, here are the Secret Warriors we can expect to meet sometime in the near future:

This Secret Warrior's given name is Sebastian, and he's the son of Doctor Druid, a superhero who was trained in magic by the Ancient One, the same mystic who would later go on to train Doctor Strange. The Druid has abilities similar to his father, although his derive from monster D.N.A. in his blood rather than magic: teleportation, levitation, and energy-related phenomena like projections and force fields.

The Secret Warriors' resident bad boy, J.T. Slade is the grandson of phosphorescent western antihero Phantom Rider, not to be confused with Ghost Rider, the Marvel character played by Nicolas Cage in two feature films — although like Ghost Rider, his weapon of choice is also the Hellfire Chain, a whip that he charges with supernatural fire. In the comics, Hellfire turns out to be a traitor working for Hydra's Baron von Strucker, and Fury allows him to plummet to his death upon the revelation.

A later addition to the team, Manifold — real name Eden Fesi — would also make a welcome addition to S.H.I.E.L.D. As an aboriginal Australian, the character would bring a nice bit of diversity to the show. His powers would also likely come in handy for the Secret Warriors, since he has the ability to teleport not just himself, but everyone around him, across any distance of space and time. (In the comics, he once saved the Secret Warriors by teleporting an entire Quinjet away from a battle.)

Alexander Aaron would be interesting to see onscreen, given that he's a literal god in the body of a 10-year-old boy. Phobos is the son of Ares, the Greek god of war — in much the same way that Thor and his father Odin are superheroes-cum-Norse-gods. The precocious godling is not only brilliant and a gifted swordsman, but he also possesses the abilities of precognition, generating fear in his enemies, and immortality (although his mortal body can still be slain).

An hardened ex-con (pun intended), Jerry Sledge can boast not only super-strength, but the ability to turn his skin into stone or steel and thus deflect virtually any attack. The antihero got this power from his father, supervillain Carl "Crusher" Creel — more popularly known as The Absorbing Man — a character S.H.I.E.L.D. viewers will actually know, having appeared in several episodes of Season 2, tasked by Hydra with stealing the Obelisk before he was eventually petrified by its power. It's hard to imagine that man having a full-grown son already, but perhaps Crusher and Stonewall could be related in a different way (brothers?) or not at all.

While we wait to see which Secret Warriors S.H.I.E.L.D. chooses to introduce, get a load of this promo that teases Season 3's increased focus on the superpowered team… and then tune into the midseason premiere this Tuesday at 9 p.m. ET on ABC.