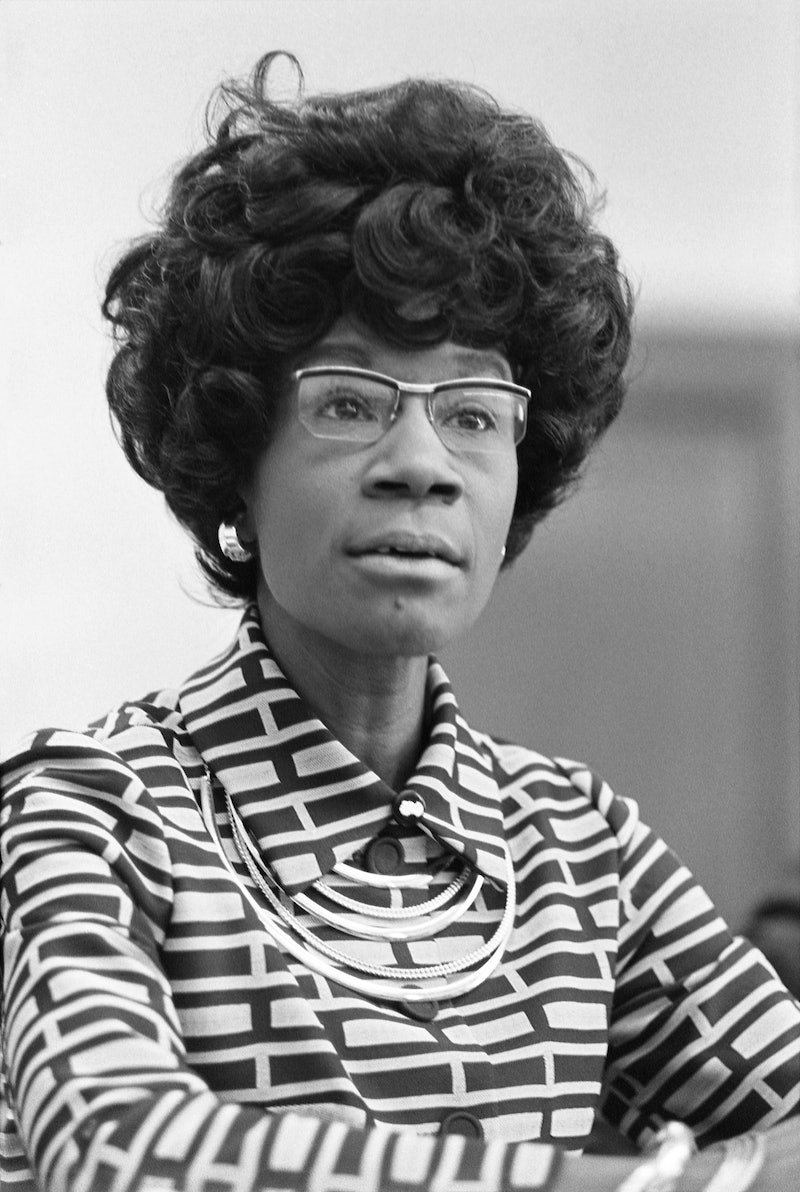 March 8 marks International Women's Day, and the entire month of March is Women's History Month, which means you'll probably be hearing a lot about some of history's most famous women. But you won't be hearing about all women who deserve acknowledgement, and one important woman in particular often escapes our attention. Who is this one woman from history you should know about but probably don't? Read on to find out.

Chisholm, nicknamed "Fighting Shirley," grew up in Brooklyn's Bedford–Stuyvesant neighborhood with immigrant parents from Guyana and Barbados. She spent part of her childhood on her grandparents' Barbados farm, giving her the slight British accent she became known for. She became a nursery school teacher and directed two daycare centers before getting a master's degree from Columbia and consulting for New York City's Division of Day Care.

In 1964, Chisholm became the second African-American woman to join the New York state legislature. Five years later, she ran for Congress. During her congressional campaign, she drove through the housing projects declaring, "Ladies and Gentlemen … this is fighting Shirley Chisholm coming through" — the announcement that earned her nickname. Her official slogan, however, was "Unbought and unbossed." She highlighted her identity as both an African American and a woman, contrasting her own views with the rather sexist ones of her opponent James Farmer, and spoke to the Puerto Rican community in fluent Spanish.

Chisholm served in the United States Congress as a New York representative from 1969 to 1983. As a Congressperson, she furthered legislation to extend daycare facilities' hours, provide families with a minimum annual income, and establish government-sponsored school lunches. She was an outspoken critic of the Vietnam War and a founding member of the Congressional Black Caucus and the Congressional Women's Caucus. She's also known for rebelling against her assignment to the House Agriculture Committee because she believed agriculture was not relevant to her Brooklyn constituency. She was ultimately reassigned to the House Education and Labor Committee, where she felt she could make a difference.

Retaining the slogan "Unbought and unbossed," Chisholm announced her candidacy for the Democratic presidential nomination in a powerful speech in 1972, declaring:

Chisholm went on to win 152 delegates in the Democratic National Convention, but ultimately, the nomination went to George McGovern, and Richard Nixon was elected for a second term. Afterward, Chisholm continued serving in Congress and then became a professor at Mount Holyoke College.

"There is little place in the political scheme of things for an independent, creative personality, for a fighter. Anyone who takes that role must pay a price," Chisholm is quoted in the Congressional Record Proceedings . Her price was the presidential nomination, but her legacy extends far beyond her bid.

Before Chisholm died in 2005, she said she wanted to be remembered as "a woman who fought for change." Soon afterward, the PBS documentary Chisholm '72: Unbought & Unbossed brought attention to her campaign's historical significance. And last year, Obama posthumously awarded her the Presidential Medal of Freedom.

Even though she never became president, as Cary Clack pointed out in theSan Antonio Express News, Chisholm's campaign paved the way for both Barack Obama and Hillary Clinton. And as a fellow Brooklyn native who rejected corporations' influence on politics and fought for economic equality, she also paved the way for Bernie Sanders.

On the eve of another potentially historic election, it's worth remembering the lesser-known woman who made the most progressive aspects of today's political climate possible.