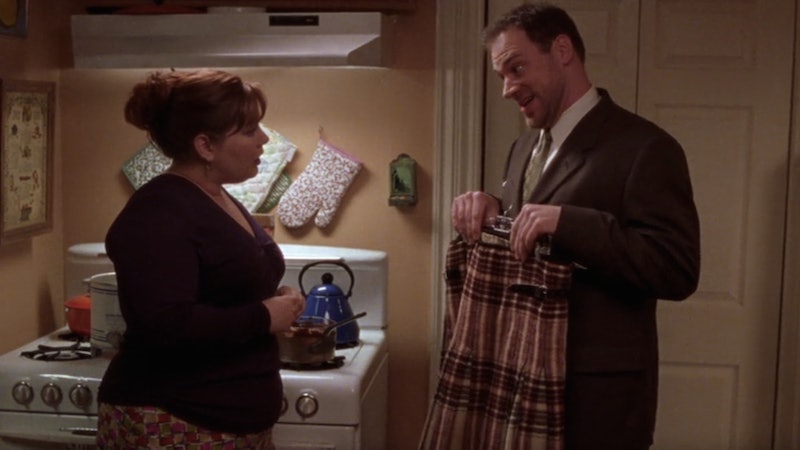 There were a lot of power couples ruling over the course of Gilmore Girls, from Luke and Lorelai, to Emily and Richard, to Rory and... well, take your pick. But I don’t think we give enough attention to Sookie and Jackson, a couple that will be half returning, children in tow. That’s right, although it still seems that Melissa McCarthy will be absent from the Gilmore Girls revival, it looks as though Sookie and Jackson’s children have been cast. And, considering that last time we checked in on the Belleville-St. James spawn they were unformed little creatures, we have a lot of questions about what role Sookie and Jackson’s kids will play in the Gilmore Girls revival.

To recap, Sookie and Jackson had two (going on three) children over the course of the show. Davey Edward Belleville was born first, followed by Martha Janice Lori Ethan Rupert Glenda Carson Daisy Danny Belleville (God, that’s a mouthful). And then there’s the ever-cryptic third child Sookie was pregnant with after Jackson psyched her out about getting a vasectomy, which was, all jokes aside, a jerk move.

Even though all these critters should still be child age, they’re definitely old enough to play a part in the plot. So this is everything we’re wondering about the Little Bellevilles.

2. What's The Name Of Sookie And Jackson's Third Kid?

I need to know so I can stop referring to it by weird, vague monikers, unless this kid also has like 12 middle names.

3. And What's The Gender Of The Third Belleville Baby?

You know, just while we're on that tangent of thought.

4. Do They Have A Good Relationship With Their Respective Godmothers?

Is Rory like Davey's fun, world-traveling godmother who brings him back souvenirs from Egypt or something? Is Lorelei Martha's fun, ever-present godmother who plans all her birthday parties?

5. Wait, Who's The Godmother For The Third Sookie-And-Jackson Child?

Is it Lane? Like, seriously, is it Lane? Because I'll be honest, I don't think Sookie and Jackson have a wide social circle.

6. Are The Kids Close Friends With The Other Spawn Of Stars Hollow?

Like Lane's twins or... IDK, if Kirk and Lulu got married and had any children, those little weirdos.

7. Are These Children Motherless After A Sookie Cooking Catastrophe Went Horribly Wrong?

After the loss of Richard, this would push Gilmore Girls into especially dark territory, but we can't write it out completely.

8. Or Are Sookie and Jackson Divorced And Jackson Somehow Got Custody?

If Sookie's grudge against Jackson's lack-of-vasectomy never went away, divorce would be plausible. It still seems a little farfetched that Jackson would be stuck in Stars Hollow raising a passel of kids, though.

9. Or Is Sookie Just In England Or Something?

Girl could use a vacation for all those years working at the Independence and Dragonfly Inn. Plus it would explain the Union Jack flag hanging at Sookie and Jackson's house.

10. Have Any Of These Kids Inherited Sookie's Cooking Skills?

Did Sookie teach them how to flambé before they could walk?

11. Are They Spoiled For Life When It Comes To Quality Meals?

These kids were probably raised on like braised quail and sweet potato gnocchi, so, when they visit Aunt Lorelai and she insists that pop tarts taste like freedom, they probably aren't going to buy it.

12. But Most Importantly, Did Jackson Ever Get A Vasectomy After All That Third Baby Drama?

I honestly can't remember, so forgive me if the show was decidedly clear about this, but, even if there was a whole "Jackson Gets A Vasectomy" episode I forgot about, can we really trust him at this point?

Because if there would be anything to make Sookie any crazier, it would be that.

It's only a matter of time before we get some more details on Sookie and Jackson's kids, but hopefully they'll help fill the void left by McCarthy.