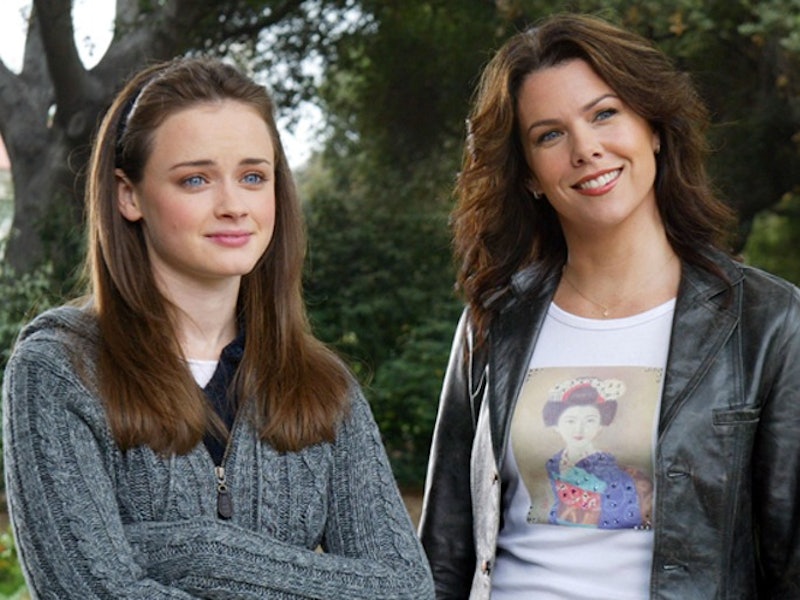 There has been quite the population boom in Stars Hollow since the last time you visited. In addition to the characters fans know are returning for the revival, the website Gilmore Girls News has a long list of young actors who have been added to the cast, and while some of them — like Zack and Lane's twin boys, Stevie and Kwan — are expected, quite a few of these characters are Gilmore Girls mystery kids. One youngster who appears to have a fairly significant role is Hunter Wenzel, and the child actor has been busy snapping photos on the Gilmore Girls set. His young co-star Mitchell Gregorio has also gotten into the photo bug action, which is good news for anyone who wants a sneak peek at what's going in Stars Hollow.

From a hippie commune to a return visit to Chilton, the revival is going to be packed, and that means every character has to count. Currently, there are at least seven children who have either been cast or are being cast for the revival, according to the site. Some of them are the no longer baby-sized characters fans knew from Gilmore Girls before the series ended, but others will reportedly be playing characters who definitely weren't around the last time you hung out with Lorelai and Rory.

It's time to get thinking, because these kids and who their parents are could totally hold clues to the revival's storylines. Here's who they could be playing.

According to E! Online, the revival is set to include a 13-year-old named Dewey, but I'm not buying it. "Dewey" sounds an awful lot like the name of Sookie and Jackson's oldest child Davey. Since Davey was born in 2003, this is the exact age he would be today. Wenzel's set photos suggest he's playing a character important enough to hang out with Lorelai, Rory, Taylor, and Babette. Since Rory is Davey's godmother, and he is the kid of Lorelai's BFF Sookie, it would make sense for him to play a big role in the Gilmores' lives.

With Melissa McCarthy's Sookie currently not slated to appear in the revival, little Davey could be visiting his dad in Stars Hollow either because his parents are divorced (commence crying now) or because his mom is off being an amazing chef in England for a few months.

There is another option, though. Wenzel could be playing one of Lane and Zack's twins. The twins were never said to be identical, and that mop of blond hair looks an awful lot like Zack's. Then there is the part where Wenzel was filming on the same day as Gregorio, who could just be...

With both Lane and Zack back for the revival, Stevie and Kwan are sure to return as well, and it looks like Gregorio has snagged the role of one of them. The twins would be nine now, and would definitely have excellent taste in music thanks to their parents and Uncle Brian. Again, since Lane and Rory are best friends, you can expect the twins to hang out with the Gilmore family a lot.

The actor appears to be having a blast with Aunt Rory here, and he's also hanging with Sutton Foster's mystery character and his maybe brother, played by Wenzel.

Could the boys be fraternal twins? I wouldn't be at all surprised if these two boys have snagged the role of the twins. Of course, that would mean Dewey/Davey is still yet to be cast.

Actors Lisa Marie and Sofia Olivia Jellen are playing an unnamed mother/daughter duo in the revival, according to the site. You guys, could this mean that Dean, Jess, or Logan is married? It's a decent possibility. Don't count Christopher and Luke out, either. The actors could simply be playing Dragonfly Inn guests or some other one-off role, but don't be surprised if at least one of Rory's exes is in the family way now (my money would be on Dean).

There are still two kids who reportedly either haven't been cast or whose casting is still be kept under wraps, and there might be a huge reason for the team to keep their identities quiet for now. E! Online reported in the same article mentioned above the Gilmore Girls revival will include 7-year-old Tim and his 5-year-old sister Gabriela, who have a Portuguese nanny. Paris fans are sure to remember how close she was to her Portuguese nanny, who was like a mother to her.

Does this mean Doyle and Paris will have kids? Almost definitely yes.

Those are all the Gilmore Girls' revival kids who have been revealed so far. These guys aren't the revival's main event, but that doesn't mean they won't play key roles in the story. I haven't even mentioned the possibility of any of these actors playing Lorelai and Luke's kids, but could you imagine?! That Netflix revival can't come soon enough...